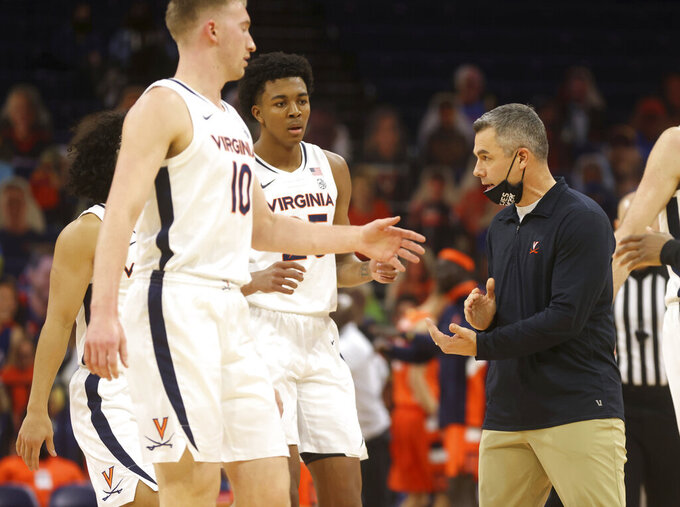 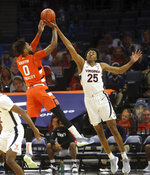 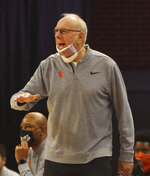 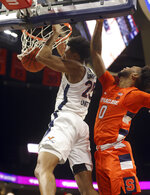 No. 8 Virginia showed off its long-range shooting in an impressive show against Syracuse's vaunted zone defense.

Hauser hit seven of Virginia’s 14 3-pointers, and the No. 8 Cavaliers cruised to an 81-58 victory against the Orange on Monday night. Murphy made four 3s, and even the 7-foot-1 Huff added one.

“We're a different team. We can spread the floor offensively with the Sams, Treys and Jays,” Cavaliers coach Tony Bennett said.

“We can't live by it, but it's an important piece of our offensive production."

Hauser hit five 3s before halftime as Virginia (11-2, 7-0 Atlantic Coast Conference) carried a 41-26 lead into the locker room. He finished with 21 points.

With Huff adding a career-high 21 points to go along with 12 rebounds and Murphy collecting 16 points, the Cavaliers finished 14 for 31 from deep. It was the seventh consecutive victory for the 2019 national champions.

Hauser's performance came after back spasms put his availability in question.

“It was weird, just in warmups it started spasming,” Hauser said. “I don't know why. I just said I was going to go out there and see how it felt. It felt good enough to play so I figured I'd just play and obviously, I shot the ball pretty well so it wasn't the worst thing.”

“Overall, we had a bad game," Guerrier said. "We need to do a better job.”

Bennett pulled his starters in the final two minutes and the Cavaliers still closed the game on a 12-2 run.

“You’ve got to give up something someplace, so you’re going to give up shots. They make 3s against everybody,” Orange coach Jim Boeheim said. “They’re a good-shooting team. We broke down a couple times. We should have gotten better position.”

Syracuse: The Orange came in shooting 78.9% from the free-throw line, on pace to set a program record, and only enhanced it by going 9 for 10. But they had some trouble with the Cavaliers' highly regarded Pack-Line defense.

Virginia: After going 17 for 51 (33%) from 3-point range in his first 10 games, Hauser is living up to his reputation as a 3-point specialist. The Marquette transfer is 15 of 23 from long range in the last three games.

Virginia had 13 turnovers after averaging 8.2 per game coming into the night, but Syracuse turned the miscues into just 10 points. The Cavaliers scored 17 off 12 Orange turnovers.

“I don't think we hung our heads too much on those turnovers,” Hauser said.

The Cavaliers climbed five spots in the poll released Monday and did nothing to damage their standing.

The Orange are at home against North Carolina State on Sunday.

Virginia goes on the road to play at No. 20 Virginia Tech on Saturday.