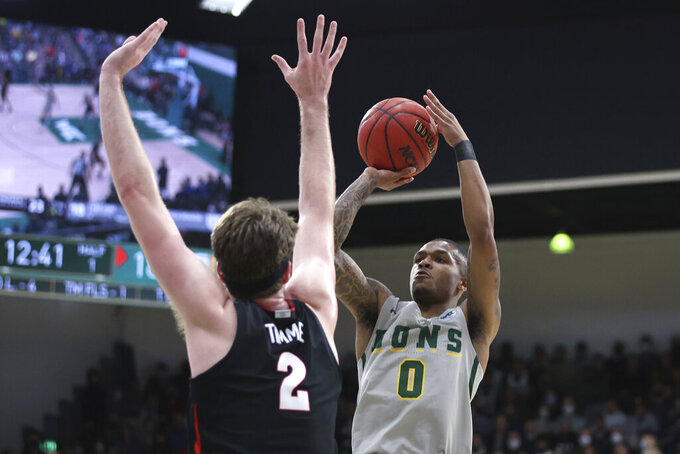 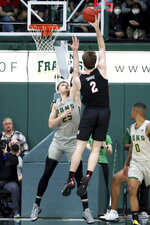 SAN FRANCISCO (AP) — Coach Mark Few told his top-ranked Gonzaga team to treat this like a tough trip to face a pair of Big 12 opponents — even if it's actually the final week of West Coast Conference play.

Chet Holmgren had 21 points, 15 rebounds and six blocked shots, and No. 1 Gonzaga picked up its defensive pressure in the second half to hold off San Francisco 89-73 and extend its winning streak to 17 games on Thursday night.

“San Francisco is a terrific team. They just look, feel, play like an NCAA Tournament team, actually like one you play in the second game of the weekend,” Few said. “For us to come in here and be able to score it and defend like we did, especially in the second half, that's a really good sign for us.”

Next up is rival Saint Mary's on Saturday.

Drew Timme just missed a triple-double with 20 points, nine rebounds and eight assists, and Julian Strawther added 15 points for the Zags (24-2, 13-0), which earned a 23rd straight victory against USF and 10th in a row on the Dons’ home floor.

“They came out, they punched us in the mouth, hit some shots but we took care of business and withstood the run and played some good D, so I was happy about that," Timme said.

Khalil Shabazz scored 17 points for San Francisco (22-8, 9-6), which honored him and the other seniors before their final home game on the Hilltop.

Shabazz took an elbow to the face and went down with 4:32 left in the game and his mother rushed the floor to check on him. A flagrant foul was called on Andrew Nembhard, who finished with 17 points and six assists for the balanced Zags.

Julian Rishwain’s 3-pointer for USF with 2:52 remaining made it a 10-point game.

Gonzaga clamped down on defense in the second half to slow the Dons, who were coming off a 104-71 road rout at Pacific on Monday. But USF got back within 75-62 on a 3-pointer by Gabe Stefanini with 8:08 to play.

Freshman star Holmgren's length at 7 feet sure helps the cause.

“He makes a huge difference,” Few said. “He's really understanding the plan and cleaning up all our miscues and we're driving guys down into him. He's a really, really smart basketball player.”

Gonzaga’s 14-4 run early in the second, including an 8-0 burst, broke open the game as USF missed six straight field goals during that stretch.

“I thought if we made a couple more of those shots in the beginning of the second half we could have maybe got on a run,” USF coach Todd Golden said. “It went the wrong way a little bit there. I thought we were pretty tough though and gritty in the way we kept fighting, kept fighting.”

Strawther fell hard to the ground in front of the Bulldogs’ bench with about five minutes left before halftime. He took a quick moment to come out of the game, stretch and catch his breath before going right back in.

Gonzaga shot 55% from the floor on Thursday. The team secured its 10th straight West Coast Conference regular-season title on Saturday, when they beat Santa Clara 81-69 despite shooting a subpar 40%.

Strawther, Timme and Holmgren combined to go 15 for 21 with five field goals apiece in the opening 20 minutes.

USF sophomore Volodymyr Markovetskyy of Truskavets, Ukraine, played 2 minutes on a day the 7-foot-2 center’s homeland was under attack.

His father stayed for work in law enforcement, while his mother and 11-year-old sister began their trek to safety in Lithuania.

“It was tough,” he said of getting ready for the game.

Golden has been in touch with Markovertskyy's mom to let her know he is being supported here.

“I can only imagine what he's going through and the way he was able to get through walk-through today and and be ready to play,” Golden said. “For a 21-22-year-old kid to be able to do that I think it speaks volumes for him.”

Gonzaga: The Zags have won 12 straight road games, the longest active streak in the country. ... Speaking of streaks, Gonzaga has won 34 straight conference games — 33 by double digits — dating to a 91-78 loss at BYU of Feb. 22, 2020, the longest such streak in the nation.

Gonzaga: Completes its Bay Area trip visiting Saint Mary’s on Saturday. The Zags have won the last seven and 22 of 26 against the Gaels.

USF: At San Diego on Saturday for the regular-season finale.