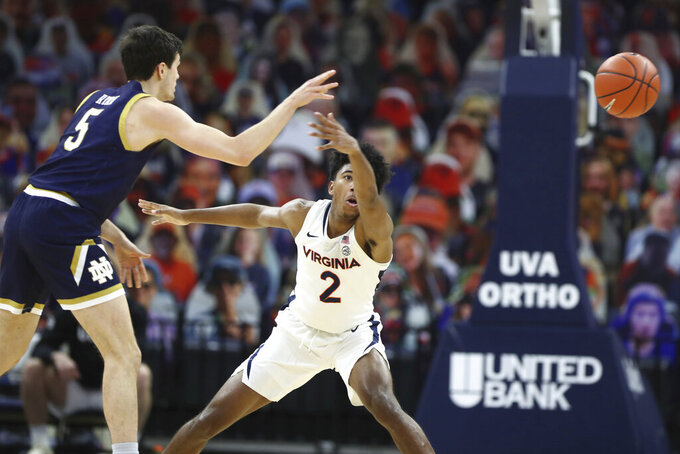 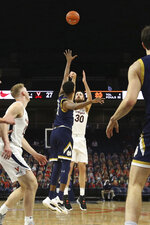 All four of Huff's 3-pointer came from the top of the key.

“I would probably say that around that area, that's my favorite spot,” Huff said. “I took a bunch of those back in my high school days. ... Plus that's kind of where they show up in the offense that we're running.”

Huff also made a fierce drive for a basket after Notre Dame pulled within 66-56.

“That's kind of always going through our minds when teams go on a run,” he said of the mindset to stop the run.

Cormac Ryan scored 16 and Trey Wertz 13 for the Fighting Irish (3-8, 0-5), who lost their fourth in a row and fell to 0-11 against Virginia in conference games. Nate Laszewski, who burned Virginia for 28 points in their first meeting, finished with 12.

“They made big jump shots in the first 10 minutes and we made none of our open ones and the game was kind of over after that,” Notre Dame coach Mike Brey said.

Morsell, who had only practiced twice after missing 10 days because of contact tracing, added 15 points and made all three of his 3-point tries.

“Coming off of a 10-day quarantine, that's really impressive to have the game that he did,” Huff said. “... My guess is that he really missed being able to get out of his room."

SOMETHING TO WORK ON

Bennett was less than pleased that the Cavaliers let the Irish back in the game.

“I thought we drifted into some old habits defensively and that isn't going to cut it,” he said.

The Irish arrived leading the ACC in 3-point percentage, but made just 5 of 22.

“They missed a lot of open looks in the first half,” Bennett said.

Notre Dame: The Irish are in trouble when their top three scorers — Laszewski (17.2), Prentiss Hubb (14.2) and Dane Goodwin (13.6) — aren't clicking. They combine to average 45 of Notre Dame's 70.6 points per game. In the first half, the trio had eight points. Trey Wertz scored 27 against Purdue, but has only played in four other games and totaled 15 points in those.

“To see Wertz and Ryan in some kind of offensive rhythm, fitting in and feeling good playing with our key guys, I'll take that out of the second half today,” Brey said.

Virginia: Huff's efficiency from 3-point range helps open things up inside for Kihei Clark and others to drive and for Hauser to take mid-range jumpers. Hauser is also a good 3-point shooter and six of the top seven that saw action made at least one from deep. They finished 12 for 24 from beyond the arc. Three regulars were absent from the lineup: Tomas Woldetensae, Justin McKoy and Kadin Shedrick.

Virginia did nothing to hurt its position, but won't get a bump for beating the struggling Irish.

The Fighting Irish will face Boston College on Saturday at home.

The Cavaliers go on the road to play at Clemson on Saturday.