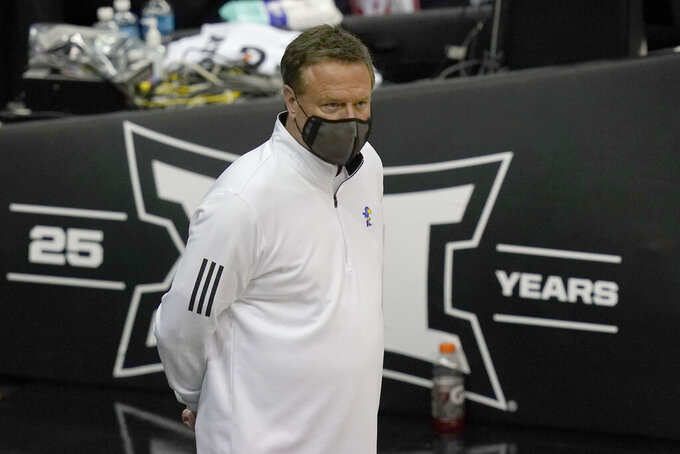 Bill Self will see a lot of Bill Self-like schemes against Eastern Washington.

The imitation is purely a show of respect toward the longtime Kansas coach.

Eagles coach Shantay Legans borrows offensive and defensive concepts straight from Self because, well, they work.

He'll get a chance to test his spin on some of Self's tactics against Self's team Saturday when No. 14 seed Eastern Washington faces the third-seeded Jayhawks during the first round of the NCAA Tournament in Indianapolis.

“It’s exciting to be able to coach against one of your living legends that you've looked up to for a long time,” Legans said. “Same for the players — they’re excited playing Kansas. ... I’m excited to see if we can compete with the big dogs.”

Legans, who is 75-48 in four seasons with Eastern Washington, emulates Self for one big reason — his winning ways. Self's gone 521-117 with the Jayhawks, including a national title in 2008.

“You gravitate toward winners,” Legans said. “I haven’t spoken to him or had a conversation with him. But I feel like I know him from just watching his team and reading things about him and reading press releases.”

Turns out, Self’s a fan of Legans, too. He was studying film and saw an Eagles play he plans to use someday — maybe even Saturday.

“Everybody steals from everybody,” Self said of plays and schemes. “I certainly have the same respect, looking at their program and their team and how they play.”

Legans and Self also have in common the experience of dealing with their seasons being disrupted due to coronavirus protocols. Starting in mid-December, the Eagles went nearly a month between games.

Last week, the Jayhawks withdrew from the Big 12 Tournament when the program returned a positive COVID-19 test following a quarterfinal win over Oklahoma.

Self said Wednesday that starter David McCormack will be back in time for the Eastern Washington game. However, guard Jalen Wilson and forward Tristan Enaruna won't be available due to protocols.

“We may not play well, but it won't be because ... we've been thrown a curveball that we can't hit,” Self said. “Our guys are confident that if we play well we can still have success.”

In more virus news around the West Region, Oklahoma coach Lon Kruger announced Wednesday that guard De’Vion Harmon will miss the first two rounds after testing positive. Harmon is the No. 2 scorer for the eighth-seeded Sooners, who face No. 9 seed Missouri on Saturday.

Meanwhile, No. 4 seed Virginia remains on campus, with plans to arrive in Indianapolis on Friday. The Cavaliers had several of their players end up in quarantine after one individual tested positive for COVID-19 last week, which forced the Cavaliers to withdraw from the Atlantic Coast Conference Tournament.

The Cavaliers have been trying to stay up to speed ahead of their game against 13th-seeded Ohio through Zoom meetings.

“We’ll make the most of it,” Cavaliers coach Tony Bennett said. “You control what you can control and get as ready as you can.”

Although not in Indy yet, Virginia forward Sam Hauser is getting life-in-the-bubble updates from his brother, Joey, who plays for Michigan State.

The brothers are from Wisconsin and their family plans to make the trip to Indy.

“It will be good to see them from a distance at least,” Sam Hauser said. “I know they'll just be happy to see us play if we get that chance. Fingers crossed.”

The Braun Brothers are both in Indy and staying in nearby hotels. Christian Braun is a guard for Kansas and Parker Braun a forward for Missouri.

“We don’t get to see each other but it’s awesome that he gets to play and I get to play and our parents get to come and watch,” Christian Braun said.

To meet in the tournament, the siblings would have to advance to the Final Four.

With a dominating performance in the Mid-American Conference tournament and the flashy play of guard Jason Preston, Ohio has emerged as a popular pick to pull off a first-round upset of Virginia, which has been knocked off kilter lately by COVID-19 issues.

“I think it’s great rhetoric and obviously great publicity for our program and our university, but in the social-media world if you really get caught up in the accolades and pats on the back, you’re going to get beat quickly,” Boals said.