Jarreau gets triple-double, No. 7 Houston tops Tulane in AAC 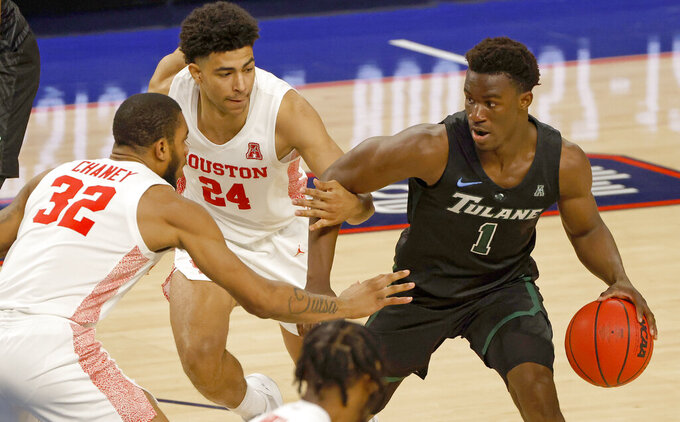 Tulane guard Sion James (1) handles the ball as Houston guard Quentin Grimes (24) and forward Reggie Chaney (32) defend during the second half of an NCAA college basketball game in the quarterfinal round of the American Athletic Conference men's tournament Friday, March 12, 2021, in Fort Worth, Texas. (AP Photo/Ron Jenkins) 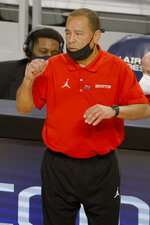 FORT WORTH, Texas (AP) — DeJon Jarreau was headed to the locker room after the first triple-double for Houston in almost 30 years when coach Kelvin Sampson echoed what other coaches have been telling him.

They thought the senior guard could get one before he left.

Jarreau finished with 15 points, 10 rebounds and a career-high 10 assists, leading the No. 7 Cougars to a 77-52 victory over Tulane in the quarterfinals of the American Athletic Conference Tournament on Friday night.

It was the first triple-double for the Cougars since Bo Outlaw had 10 points, 14 rebounds and 10 blocks against Texas A&M on Feb. 17, 1993. The feat was also a first for the American tournament, which is being played for the seventh time.

“The fact that it happens very seldom in college tells you how special the guys are who do get them,” Sampson said. “I’m so happy for him because that’s going to be a memory. His unselfishness, his toughness, those are the things that show in triple-doubles.”

Quentin Grimes scored 15 points and Marcus Sasser added 14 as each connected on four 3-pointers to help the Cougars (22-3) recover from a cold-shooting first half from long range.

Justin Gorham had 11 points and seven rebounds for Houston, which will play the UCF-Memphis winner in the semifinals Saturday night.

Kevin Cross scored 11 points for the 10th-seeded Green Wave (10-13), who stayed with a Top 10 team into the second half after beating seventh-seeded Tulsa 77-70 in the first round.

“I thought the second half they just came out and just wore us down,” coach Ron Hunter said. “We've gotten better. The future is bright for these kids. We don't have enough right now, but we will one day.”

While Houston never trailed, the nation's third-best team in scoring margin had trouble building a comfortable lead because of 13 misses in its final 15 attempts from 3-point range in the first half, including eight in a row.

The Cougars were 6 of 22 from 3 when Grimes made one for their first 10-point lead at 48-38. On Houston's next possession, Sasser hit another shot from long range for a 51-40 lead.

Sasser, who was 4 of 8 from 3-point range while Grimes went 4 of 9, later connected for a 60-42 lead with seven minutes remaining as the Cougars outscored the Green Wave 44-23 in the second half.

Grimes and Sasser combined to make five of six from long range in the second half, and Jarreau assisted on the first three.

“I always love to see my teammates score,” said Jarreau, who had nine assists four times previously. “Makes me feel like I score. When I pass the ball and I think it's a good shot, I'm even yelling to shoot it. I think that gives them confidence as well, alongside their work.”

Jarreau was a rebound shy of a triple-double when he re-entered the game with 4:16 to go. Shortly thereafter, his 10th defensive rebound secured the first triple-double in the conference in two years.

“Even when I thought Houston was struggling early, he made every single play to kind of keep them around until they could blow the game open,” Hunter said. “If he can play this way, I think they're hard to beat."

Tulane: The Green Wave wrapped up a seventh straight losing season with a freshman and three sophomores in their starting five. When he took the Tulane job two years ago, Hunter had one losing record in his previous 18 seasons at IUPUI and Georgia State. The first-half showing against the Cougars offers hope that Tulane’s losing run can end in 2021-22.

Houston: The Cougars entered the game leading the nation in field-goal percentage defense at 37% before Tulane made five of six shots to start the game. It didn't last for the Green Wave. They ended up at 37% for the game. Tulane was 8 of 18 on free throws.

A reporter told Jarreau after the game he had just talked to Outlaw, who wanted to congratulate the New Orleans native. Jarreau responded by saying a member of the coaching staff had been mentioning Outlaw to him.

“They were always kind of reminding me because they thought I was capable,” said Jarreau, who had teammates counting down the rebounds for him in the second half. “Tell him I appreciate it, and I'm happy I was the next one to do it.”

Tulane had two chances in the first half to take what would have been its first lead when trailing by a point. Tylan Pope missed from inside the arc on the first, and R.J. McGee later couldn’t connect on a 3.

Houston is looking for a third straight trip to the American championship game.