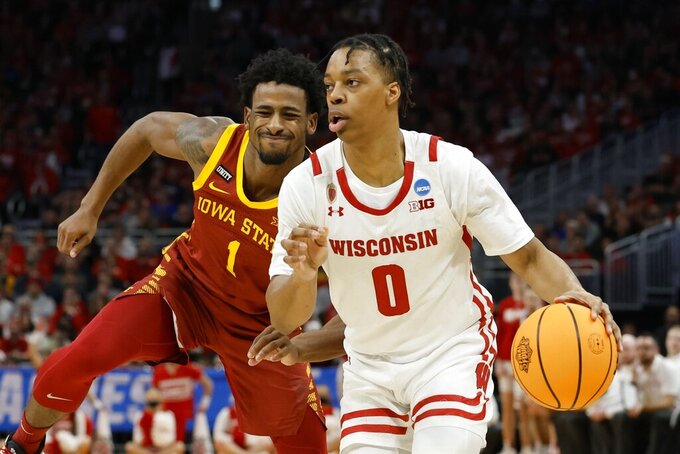 MILWAUKEE (AP) — Gabe Kalscheur made a handful of big shots for Iowa State, and he helped the Cyclones put together another stellar defensive performance.

No Minnesota nice for Kalscheur. Not in Wisconsin, anyway.

Kalscheur scored 22 points and 11th-seeded Iowa State surprised Wisconsin in the Badgers' backyard, advancing to the Sweet 16 with a 54-49 victory Sunday in the second round of the NCAA Tournament.

For Kalscheur, a 6-foot-4 transfer from Minnesota who knows Wisconsin senior Brad Davison from their days growing up in the Minneapolis area, it was a particularly satisfying moment.

“Really never liked Wisconsin, to be honest,” Kalscheur said. “I mean I have family from there, but I'm a Minnesota-raised man.”

Izaiah Brockington added 10 points as the gritty Cyclones used their tough defense to hold off Johnny Davis and company in front of a raucous pro-Wisconsin crowd about 80 miles away from the school's Madison campus.

After winning just two games last season, Iowa State (22-12) advanced to the Sweet 16 for the first time since 2016 and the sixth time in school history. It will play 10th-seeded Miami — a 79-61 winner against No. 2 seed Auburn — in the Midwest Region semifinals on Friday in Chicago.

“We didn’t set out for a certain win total or to do anything based on what transpired in the past,” first-year coach T.J. Otzelberger said. “What we did set out to do is restore pride to a program that I love so much, our players do and has a rich history.”

Kalscheur went 10 for 19 from the field. The rest of the Cyclones combined for 10 made field goals. After Brockington and freshman Tyrese Hunter led Iowa State to a 59-54 win over LSU in the first round, it was Kalscheur's day.

“We made history,” Kalscheur said.

Davis, the Big Ten Player of the Year, led Wisconsin with 17 points, and Davison finished with 12. But the Badgers (25-8) shot a season-low 29.8% from the field and turned it over a season-high 17 times.

Wisconsin was leading the nation with an average of 8.4 turnovers per game coming into the day. It was the lowest scoring game for the school since a 53-46 loss to Virginia on Nov. 23, 2018.

“Shot the ball uncharacteristically poor today,” coach Greg Gard said. “Turned the ball over. We're No. 1 in the country in fewest turnovers. Today we were not."

The third-seeded Badgers, who lost freshman point guard Chucky Hepburn to a leg injury in the first half, led by one after Chris Vogt's rebound dunk with 18:09 left. But the Cyclones responded with an 11-2 run.

Kalscheur's 3 put Iowa State ahead to stay, and Brockington's jumper made it 38-30 with 10 minutes left.

The Badgers pulled within five on Davis’ two foul shots with 3:09 to go, but the rally fizzled from there. Hunter made two free throws and Kalscheur added another one from the line to help the Cyclones hold on.

“They played a really good pressure defense. They did a really good job of taking away passing lanes,” said Davis, who was 4 for 16 from the field. “I just think that we just straight up missed shots and didn't share the ball the way we were supposed to.”

Hepburn hurt his left leg after contesting Hunter’s layup with 4:37 left in the first half. He grabbed his leg after he landed and had to be helped off the court.

He watched the second half from a seat on the end of Wisconsin's bench, using crutches to move around while wearing a boot on his leg.

“He said he's in quite a bit of pain,” Gard said. “We'll make sure he's in good hands and get him healthy, get it figured out.”

Hunter’s basket sparked an 8-0 run that gave the Cyclones a 25-22 lead with 1:44 remaining. Caleb Grill converted a layup as time expired, making it 27-26 Iowa State at the break.

Davis spiked the ball in frustration as he left the court after Grill’s basket. The Badgers had eight turnovers at the break after they turned it over just five times during their 67-60 victory over Colgate in the first round.

Iowa State: The Cyclones’ swarming defense is keeping the team in games while it struggles on offense, and that makes the Big 12 team a threat in the next round. It shot just 34.5% from the field.

Wisconsin: Hepburn’s injury put the Badgers in a bad spot, but the team just never got into a rhythm offensively.