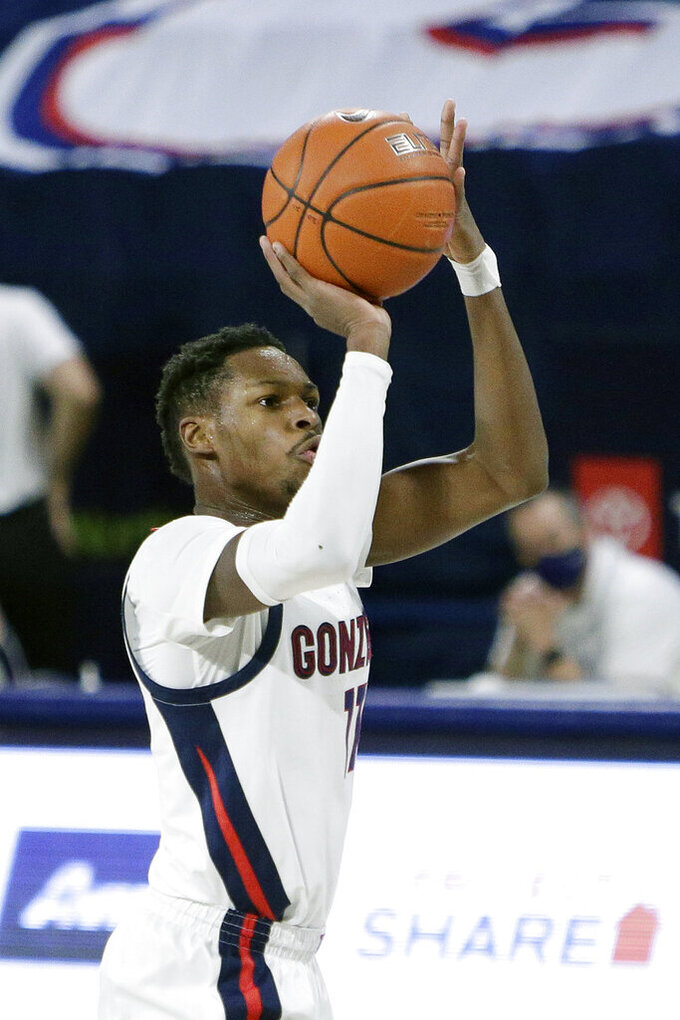 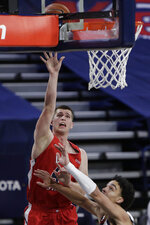 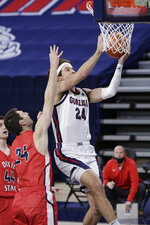 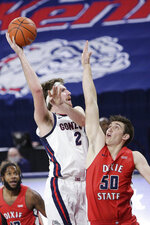 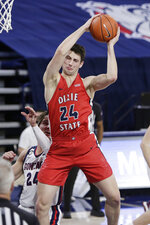 SPOKANE, Wash. (AP) — For the second night in a row, Joel Ayayi put up a double-double as top-ranked Gonzaga beat an overmatched foe.

Gonzaga coach Mark Few said it took some prodding to help Ayayi break out of a recent scoring slump, and that is paying off.

“He's hunting his shot better," Few said. ”He has a knack for tracking the ball down and knowing where it's going."

Ayayi had 17 points and 10 rebounds in Monday's win over Northern Arizona.

“I'm amazed he's had back-to-back double doubles,” Few said of the slightly-built Ayayi, a junior who is 6-foot-5 and 180 pounds. “Who'd had thought that with the body he has?”

Ayayi added six assists and was 8-of-9 shooting from the floor.

“He's too good to be held down for long,” Kispert said of Ayayi.

Kispert, who leads the team in scoring, made 10 of his 16 shots.

Oumar Ballo added 17 points on 6-of-6 shooting for Gonzaga (9-0), which has won 43 consecutive home games, the longest streak in the nation.

Cameron Gooden scored 20 points, Jacob Nicholds had 11 and Jacob Greene 10 for Dixie State (4-2), which is in the first year of its transition to Division I basketball. The Trailblazers were down to nine players because of COVID-19 protocols and injuries.

“When you play a team like this you have to play the best game of your life to beat them, and it wasn’t ours tonight," Dixie State coach Jon Judkins said. "You can learn from wins and you can learn from losses, and tonight we hope that we can watch the film and get better.”

Gonzaga was playing for the second consecutive night and the sixth time in 10 days.

“We decided to give him another day of rest,” Few said. “Hopefully he'll be ready to roll against San Francisco.”

Dixie State tried to run with the Zags in the first half but could not sustain the pace. Ayayi scored 10 points as Gonzaga jumped to a 30-18 lead in the opening eight minutes, and the Bulldogs shot 70% to lead 36-24 after 12 minutes.

Gonzaga extended its lead to 30 points early in the second half and the Trailblazers faded.

Dixie State committed 20 turnovers, which the Zags converted into 30 points. The Zags had just seven turnovers in the game.

Gonzaga should remain atop the Top 25 for an eighth week if it beats San Francisco on Saturday.

Dixie State: The Trailblazers, based in St. George, Utah, spent the past decade as an NCAA Division II power. The Western Athletic Conference team has four returning starters and came in averaging better than 80 points per game.

Gonzaga: The Bulldogs, coming off a 30-point win over Northern Arizona on Monday, are second in the nation with an average of 94.3 points per game and third in shooting at 55%. Kispert (20.6) and Drew Timme (20.6) lead the West Coast Conference in scoring. The Bulldogs have won 30 of their past 31 games.

Gonzaga hosts San Francisco in its WCC opener on Saturday. Few admitted that he hasn't paid much attention to the league yet. “San Francisco is somebody that plays really tough,” Few said. “We have to be ready to go every night out.”