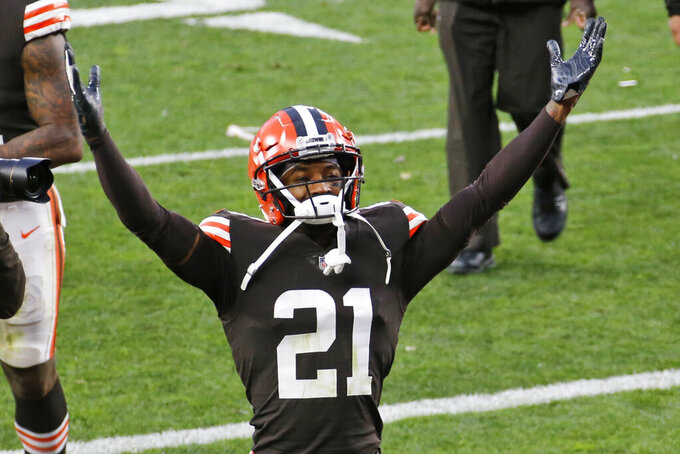 FILE - In this Sunday, Nov. 15, 2020 file photo, Cleveland Browns cornerback Denzel Ward celebrates after the Browns defeated the Houston Texans 10-7 after an NFL football game in Cleveland. The Browns are trying to shake free from COVID-19 to face the Steelers. Cleveland's issues with the virus intensified Thursday, Dec. 31, 2020 as top cornerback Denzel Ward and linebacker Malcolm Smith were placed on the COVID-19 reserve list and the team was forced to close its facility before canceling practice with the biggest game in decades coming fast.(AP Photo/Ron Schwane, File)

Hours after No. 20 Duke said coach Mike Krzyzewski would sit out Saturday against No. 18 Florida State on Saturday after coming into close contact with a person who tested positive for COVID-19. the game was postponed because of coronavirus issues at Florida State.

Duke said the COVID-19-positive person who came into contact with Coach K was not in the Blue Devils' travel party. Krzyzewski did not travel with the team to Tallahassee.

Saturday's scheduled men's basketball game between No. 23 Virginia and No. 24 Virginia Tech has been postponed because a Virginia staffer has tested positive for COVID-19.

The Atlantic Coast Conference announced the postponement on Friday, saying the positive test led to quarantining and contact tracing within the Virginia program.

This is the second time COVID-19 has led to a disruption in Virginia's schedule. The most recent national champions halted activities for 10 days last month, leading to three games being postponed and one being canceled.

White tested positive for COVID-19 and Barrett, the Bucs' top sack threat, is considered a high-risk close contact. All three will miss Sunday's game against Atlanta.

White is likely out for the Bucs' playoff game next weekend; Tampa Bay has clinched a wild-card spot in the NFC.

The Bucs have three players with at least eight sacks, and White and Barrett are two of them.

Allen is tied for fifth in the NFL with 100 receptions and was recently selected to his fourth Pro Bowl.

Tight end Hunter Henry remains on the COVID-19 list and will miss his second straight game Sunday at Kansas City.

Marquette women’s basketball has paused activities because of a positive COVID-19 test.

As a result, Marquette has postponed its scheduled games Sunday against No. 18 DePaul, Wednesday against Creighton and Jan. 9 against Villanova.

The first TYR Pro Swim Series event of 2021 has been reduced to two sites because of the coronavirus pandemic.

Irvine, California, was dropped as a host of the meet from Jan. 14-17 after a regional stay-at-home order for Southern California was extended last week.

San Antonio, Texas, will be the main site and feature an invitation-only field of the top-ranked U.S. swimmers. Richmond, Virginia, will host up to 100 women and 100 men based on current U.S. Olympic Trials time standards.

Results from both sites will be combined to determine winners.

Under normal circumstances, the Pro Swim Series consists of four-day long-course meets at a single site with 400 to 600 swimmers, including foreign competitors.

The U.S. Olympic trials are scheduled for June 13-20 in Omaha, Nebraska.

Browns chief of staff Callie Brownson will fill in for wide receivers coach Chad O’Shea on Sunday against the Pittsburgh Steelers.

This will be the second time Brownson has been called on by coach Kevin Stefanski.

Earlier this season, she became the first female in NFL history to handle in-game assistant coaching duties when she substituted for tight ends coach Drew Petzing. He didn’t travel with the Browns to Jacksonville as his wife gave birth to the couple’s first child.

Stefanski again praised Brownson on Friday for her versatility. He added her to his staff shortly after being hired by Cleveland last year.

The team said earlier this week that one of its coaches tested positive for COVID-19, but didn’t identify O’Shea.

It’s been an interesting week for Cleveland’s wide receivers. Four of them, including Jarvis Landry, missed last week’s game in New York as COVID-19 close contacts. They were activated on Thursday and will now play their biggest game in years without their position coach. The Browns will make the postseason for the first time since 2002 with a win over the Steelers. They reopened their facility Friday.

The team will be without several players, including top cornerback Denzel Ward on Sunday. The Browns did not have any new positive COVID-19 tests on Friday, and after getting league approval, practiced indoors. They canceled practice Thursday and kept their building closed to determine whether there was a virus outbreak.

Cleveland will be without Ward, starting linebacker B.J. Goodson, safety Andrew Sendejo and tight end Harrison Bryant when it faces Pittsburgh, which will sit starting quarterback Ben Roethlisberger and others so they’re rested for the playoffs.

The Pac-12 has postponed Saturday’s men’s basketball matchup between Arizona State and Washington due to COVID-19 issues within the Sun Devils program.

It’s the second straight postponement for the Sun Devils after their game scheduled for Thursday at Washington State was also called off.

The Pac-12 said it will work with all programs to try and reschedule the postponed games.

Arizona State has not played since Dec. 16 and is scheduled to face UCLA next Thursday. The Sun Devils had games against Incarnate Word and Utah before Christmas postponed because of COVID issues within those programs.

Washington is next scheduled to play at Stanford on Thursday.

“We’ve taken every precaution,” Flores said Friday. “We’ve followed the protocols. As far as close contacts, we’re in good shape from that standpoint.”

Fitzpatrick went on the reserve-COVID-19 list Thursday and is expected to miss the regular-season finale at Buffalo on Sunday, when Miami will try to clinch an AFC wild-card berth. Every player on the active roster practiced Thursday and Friday, an indication none was identified as a high-risk close contact with Fitzpatrick.

Rookie Tua Tagovailoa will start his ninth game in a row Sunday, and veteran Jake Rudock signed Thursday as the new backup quarterback.

Fitzpatrick came off the bench in the fourth quarter last week to rally Miami to an improbable win at Las Vegas. He’s now sidelined on the verge of making the playoffs for the first time in his 16-year career.

“He’s a big part of the team,” Flores said. “It’s disappointing for him more than anything. I know how important this team is to him. We’ll just push forward and give our best effort on Sunday.”

Receivers DeVante Parker and Jakeem Grant, guard Solomon Kindley and linebacker Shaq Lawson are all questionable for the Bills games.

Denver Nuggets forward Michael Porter Jr. will not play against Phoenix on Friday night because of the NBA’s coronavirus protocols.

There’s no timetable for his return and he could miss multiple games because of contact tracing.

Porter is second on the team in scoring with a 19.5-point average. He was a first-round pick out of Missouri in the 2018 NBA draft. He sat out his first season because of back issues.

Porter earned All-Bubble, second-team honors when play resumed over the summer in Florida. The Nuggets made it to the Western Conference finals before being eliminated by the eventual champion Los Angeles Lakers.

The Buffalo Bills have activated three players from their reserve-COVID-19 list: wide receiver John Brown, safety Josh Thomas and running back Christian Wade. Thomas and Wade are back on the practice squad.

Brown, who led the Bills in yards receiving last year, missed one game on the COVID-19 list and the previous four on injured reserve with a knee issue. He’s been limited to playing eight games after also hurting his ankle earlier this season.

Brown’s return coincides with wideout Cole Beasley's status being uncertain due to a knee injury sustained in the fourth quarter against New England on Monday night. The Bills host Miami on Sunday and already have clinched the AFC East title.

The team said Friday he was immediately isolated, as were two unidentified potential close contacts.

Coach Joe Judge said the contacts were staff and coaches, not players. Assistant line coach Ben Wilkerson will handle the line Sunday when the Giants (5-10) host the Dallas Cowboys (6-10). Both teams have a chance to win the NFC East if Washington (6-9) loses at Philadelphia on Sunday night.

DeGuglielmo was able to work with the line virtually in a morning walk-through, Judge said.

DeGuglielmo joined the Giants in midseason and was promoted to offensive line coach when Marc Colombo was fired.