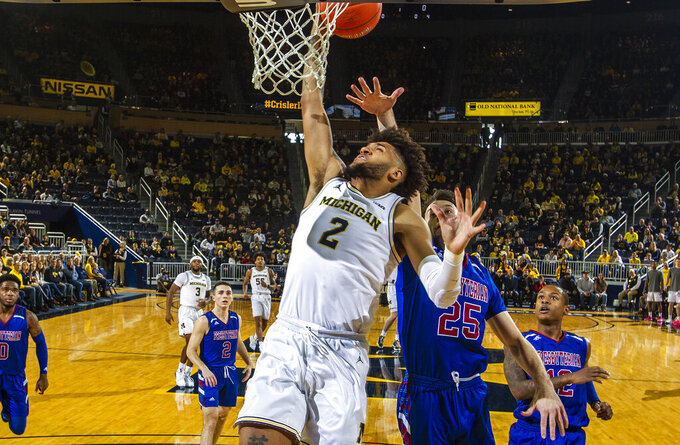 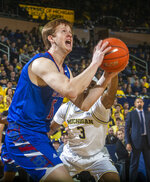 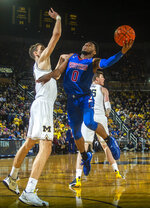 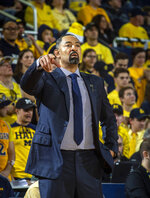 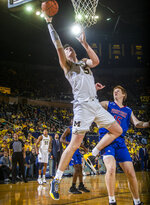 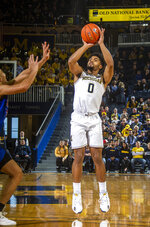 ANN ARBOR, Mich. (AP) — Isaiah Livers went up for a dunk and missed, drawing a foul in the process. Then he walked around looking gimpy and holding his left leg.

Not what Michigan needed in what was otherwise a routine victory.

Livers left early in the first half, but that was the only real problem for the 14th-ranked Wolverines in an 86-44 win over Presbyterian on Saturday. Michigan described the injury as a muscle strain, and coach Juwan Howard didn't have much information afterward.

“I'm just praying that it's not a serious injury, and tomorrow hopefully he will feel better,” Howard said. “I trust we have a great medical team that's going to take good care of him and give us also the proper advice that's needed to help us find answers.”

Jon Teske scored 11 of his 15 points in the first half, and the Wolverines (9-3) snapped a two-game losing streak. Michigan raced out to a 17-4 advantage and led 38-15 at halftime.

Livers was hurt early on. He made his two free throws, then left the game and finished with only 3:06 of playing time.

“You never know exactly how your team is going to approach each and every opponent," Howard said. "Our guys were locked in from start to finish.”

Michigan's previous six games had included four opponents in the top 10 and two others from the Big Ten. This was a break from that, but the Wolverines were sharp from the start. They'd had a week off after losing in overtime to Oregon.

“We'd rather be playing games instead of practicing — a lot more fun," Teske said. “Especially this week too. A lot of guys were finishing up school too, with exams and everything, essays. I'm just proud of how we battled through that and stayed focused on this game at the same time.”

Zavier Simpson had nine points and nine assists for Michigan.

Presbyterian: The Blue Hose were competitive in a 10-point loss at Notre Dame last month, but they couldn't keep this one close. Presbyterian shot 0 for 9 from 3-point range in the first half, which helped the game get quickly out of hand. The Blue Hose finished 3 of 20 from beyond the arc and shot 28% overall.

Michigan: The Wolverines won't be happy with an injury in a game they won by 42, but Michigan was impressive at both ends of the court and had a chance to go deep into its bench during the second half.

Michigan used 14 players in this game, and 10 of them had at least 10 minutes.

The only player who didn't play for Michigan was Brandon Johns, who was out with an illness. Bajema scored nine points in 11:05, and Austin Davis added seven in 17:09.

This game probably won't change the perception of Michigan much. The Wolverines aren't likely to be challenged again until they resume Big Ten play at Michigan State on Jan. 5.

Michigan: The Wolverines have another lengthy break before hosting UMass Lowell next Sunday.