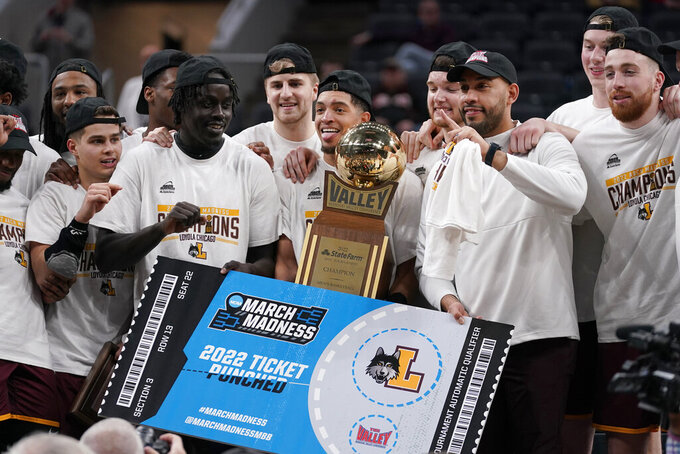 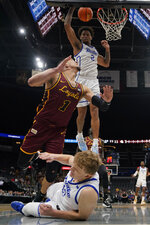 ST. LOUIS (AP) — Lucas Williamson had 18 points and 10 rebounds, Aher Uguak added 16 points and 10 boards and Loyola Chicago defeated Drake 64-58 on Sunday to win the Missouri Valley Conference tournament and advance to the NCAA Tournament for the second straight season.

Ryan Schwieger added 13 points for the fourth-seeded Ramblers (25-7) who came through against the Bulldogs in a rugged championship game after losing twice in the regular season to Drake (24-10).

Roman Penn scored 18 points and MVC freshman of the year Tucker DeVries had 15 points and a career-high five blocks for Drake. ShanQuan Hamphill had 10 boards to go with six points.

Neither team reach 40% shooting and both were 25% or less from the arc in a game in which both teams had a player foul out and two others with four fouls. Loyola made 17 of 24 from the line to 11 of 18 for Drake which made up partially for the Bulldogs' 23-6 advantage on points off turnovers.

Trailing the entire half, Drake got within two twice in the final couple of minutes, the last time with 22 seconds remaining after two Penn free throws. But Drake was forced to foul and Schwieger and Braden Norris converted two free throws each.

Drake, which beat Missouri State 79-78 in overtime in Saturday’s semifinals, had a seven-game win streak snapped.

Drake opened the game outscoring Loyola 18-8 with DeVries capping the run with a 3-pointer, the last of his 10 first-half points, while the Ramblers started 2-of-13 shooting.

Then the game took a complete turn with Drake missing its next five shots, going 2 of 14 and committing four turnovers as five Ramblers combined for 19 answered points and a nine-point lead after a Norris 3-pointer.

The Bulldogs recovered in the final two minutes to score the final seven points to trail 27-25 at halftime.

Uguak had a three-point play and a layup during a four-minute stretch when the Ramblers edged out to a nine-point lead, their largest of the second half, with 4 1/2 minutes to go. Part of that scoring came while Drake was missing eight straight shots over six minutes.

It’s the first time since 1962-63 that the Ramblers have reached the NCAA Tournament in consecutive seasons.