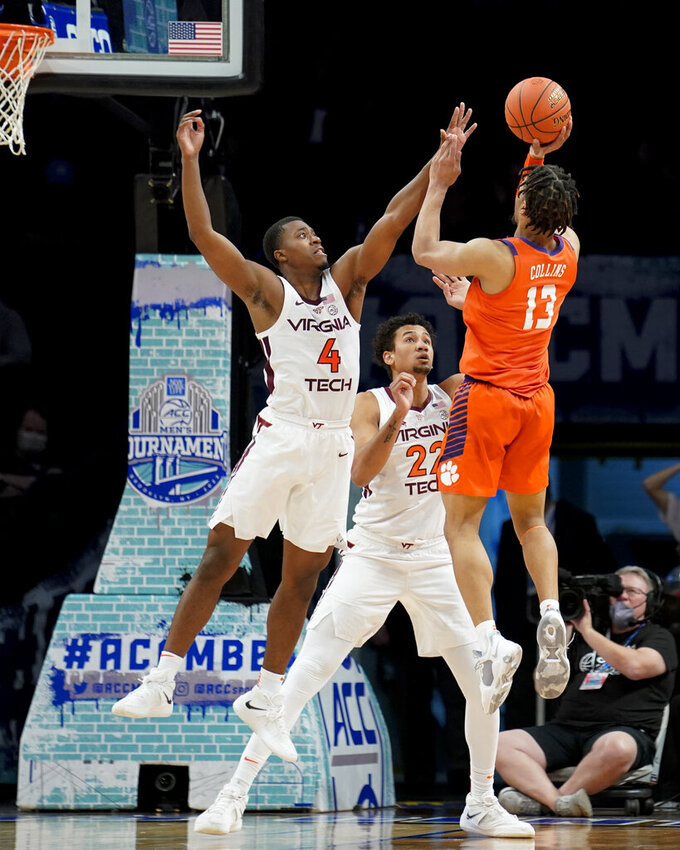 NEW YORK (AP) — Darius Maddox buried a 3-pointer at the buzzer in overtime and Virginia Tech held off a furious rally by Clemson for a 76-75 victory in the second round of the Atlantic Coast Conference tournament on Wednesday.

Neither team scored in overtime until Aluma hit a 3-pointer with 2:58 left and — following a 3-pointer by Clemson's Al-Amir Dawes — added a three-point play to put the Hokies up 72-69 at the 2:19 mark. Hunter Tyson had a layup, Hall added two free throws and the Tigers led 73-72 with 1:19 remaining.

Dawes made 1 of 2 free throws for a 74-72 Tigers lead. Justyn Mutts had a chance to tie for the Hokies with eight seconds left, but missed the first of two free throws. Hall missed an opportunity to push Clemson's lead to three by making 1 of 2 foul shots, setting the stage for Maddox.

Aluma, who is one of only three Virginia Tech players to earn all-ACC honors multiple times — joining Malcolm Delaney (2009-11) and Erick Green (2012-13) — finished with 19 points and 10 rebounds. Murphy scored 15 on 5-of-8 shooting from 3-point range. Mutts had 10 rebounds to go with nine points. Maddox had eight points off the bench.

No. 7 seed Virginia Tech advances to play No. 2 seed Notre Dame in the quarterfinals on Thursday. The Hokies beat the Fighting Irish 79-73 on Jan. 15 in their only meeting of the season.