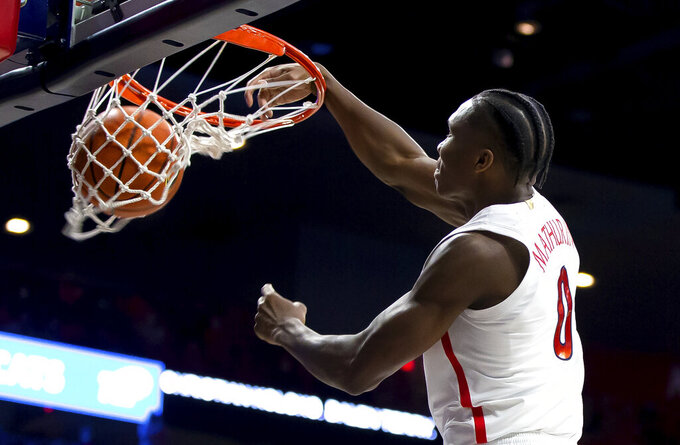 Arizona guard Bennedict Mathurin (0) dunk against Washington during a fast break in the first half of an NCAA college basketball game in Tucson, Ariz., Monday, Jan. 3, 2022. (Rebecca Sasnett/Arizona Daily Star via AP)

TUCSON, Ariz. (AP) — Bennedict Mathurin played a supporting role at Arizona as a freshman, showing off his athleticism only in flashes.

A key cog for the eighth-ranked Wildcats this season, Mathurin is now displaying skills that have pushed him toward the top of NBA draft boards.

Not bad for a player who's still learning the college game.

“Benn needs to develop at his own pace and he looks pretty good to me right now,” Arizona first-year coach Tommy Lloyd said. "I just think he needs to stay locked and loaded on what he’s doing and he’s getting great results and he is developing into a real basketball player.”

Mathurin is of Haitian decent but grew up in Montreal. The lanky guard was a four-star recruit out of high school and played at NBA Academy Latin America in Mexico City, Mexico.

Mathurin wowed the fans at McKale Center at times as a freshman, soaring in for vicious dunks while averaging 10.8 points per game. He scored 31 points against Oregon State last season, but at times was a nonfactor offensively.

The 6-foot-6 guard has become more assertive this season after opting to return, leading Arizona with 18.9 points and grabbing 6.5 rebounds per game. He's risen to the occasion in the biggest games of the season, scoring 25 against Wichita State, 30 against Illinois and 28 against No. 18 Tennessee.

“I felt like coming out of the season I had to do it by myself, but it’s about trusting my teammates," Mathurin said. "Trusting them that they can find me and I’m gonna find them. The goal is to win, so if I get 20 points or I score five points, all I want to do is win.”

Mathurin's rise has moved him up from a possible late first-round NBA pick to a possible lottery pick.

STRENGTHS: Supremely athletic, he plays well above the rim, can beat defenders off the dribble and is an excellent perimeter shooter. Long-armed and agile, he has the tools to be an excellent on-ball defender.

WEAKNESSES: The knock on Mathurin coming out of high school was that he had a hard time finishing around the rim through contact. Added strength during the offseason has helped with that this year.

While Mathurin has the physical tools to be an elite defender, it doesn't always show up on the court. He also could improve on pick-and-roll decisions.

“His pick-and-roll decisions and ‘reads’ are a work in progress, but coming off a ball screen to score is no issue,” Fraschilla said.