Method to their madness as fans bet on college hoops tourney 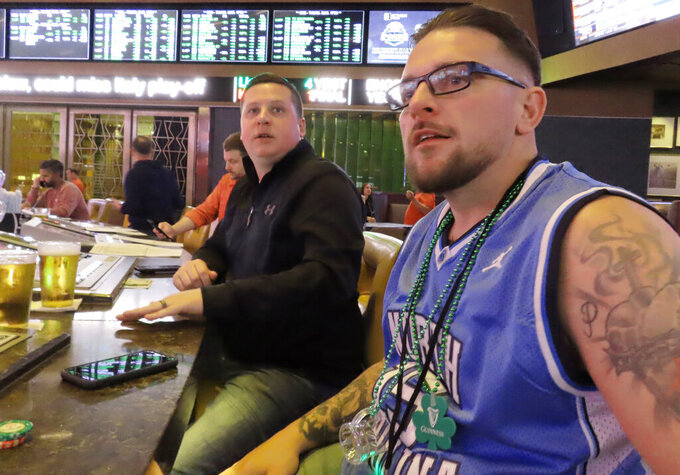 Mike Cassidy, left, and John Raymond, right, both of Wilmington, Del., ponder which bets to make at the Borgata casino in Atlantic City N.J., while waiting for the first games of the March Madness NCAA college basketball tournament to begin on Thursday, March 17, 2022. (AP Photo/Wayne Parry)

ATLANTIC CITY, N.J. (AP) — John Raymond made a plan and was sticking to it after arriving at Atlantic City's Borgata casino to bet on the March Madness college basketball tournament Thursday.

“I'm going to drink as much as I can, win as much money as I can, watch every single game, eat some good food and hang with my friends,” the Wilmington, Delaware man said. “I'm going to chase that pot of gold at the end of the rainbow, and if for some reason it doesn't work out today, I'm going to do it all again tomorrow.”

That sort of exuberance was playing out in casinos, bars, living rooms and distracted offices across the country Thursday as the annual championship tournament got under way. It was also St. Patrick's Day.

“This is just such a fun day,” said Mike Cassidy, also of Wilmington, Delaware. “It's one of the best days of the year.”

It's also one of the busiest for casinos and sports books that take action on the tournament, particularly this year as COVID-19 restrictions have been lifted in most places.

“It's nice to be back at full strength,” said Tom Gable, the Borgata's director of race and sportsbook. “Last year's March Madness was the first mass gathering we did since COVID began, but we were still social distancing. This year seems like we're back to normal. We were getting calls in December from people wanting to reserve spots to watch the tournament.”

The AGA predicted that $3.1 billion will be wagered on this year’s tournament, a figure that includes legal bets as well as those placed with illegal bookies or offshore web sites. It said it expects that more than 17% of American adults will place at least one bet on the tournament.

Among them were Mike McMahon of Long Island, New York who, like many people across the country, picked Gonzaga to win it all.

He also thinks Tennessee, Kentucky and Kansas will make the Final Four.

Raymond also picked Gonzaga to win the championship, defeating Arizona in the final. He noted, with some disappointment, that a larger group of friends was supposed to be there with him Thursday, “but their wives wouldn't let them.”

His friend Cassidy, perhaps swayed by the fact that it was St. Patrick's Day, picked Notre Dame to win the title.

“The Irish will run the table,” said Cassidy, who has a leprechaun tattoo. “They've been out of the tournament for years, and they're hot now. It's March, baby! Anything can happen.”

The national gambling group predicts that 36.5 million Americans will bet by filling out brackets predicting the results of every game through the final.

Bettors in the AGA survey named Gonzaga (17%) as their favorite to win the tournament, followed by Duke (12%), and Kentucky (11%).