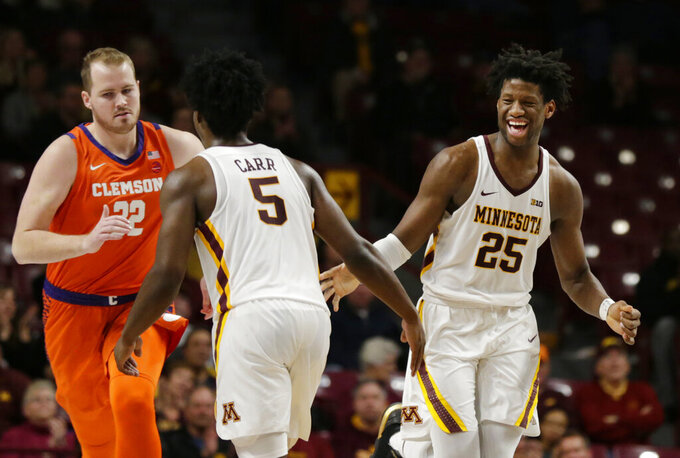 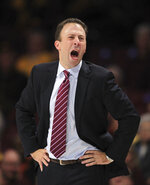 MINNEAPOLIS (AP) — Marcus Carr has made an immediate impact as Minnesota’s new point guard, a sophomore transfer with plenty of room left for improvement.

This bounce-back performance was his best yet.

Carr had a career-high 24 points plus nine assists and five rebounds, Daniel Oturu scored 21 points in 24 minutes after first-half foul trouble, and Minnesota never trailed in a 78-60 victory over Clemson in the ACC/Big Ten Challenge on Monday.

“We’ve been tested more than in my six years of being here. We needed something to show for it,” Gophers coach Richard Pitino said. I’m a believer in the process and all that, but it’s nice getting a win, too, and I think our guys needed to start feeling good about themselves.”

Carr, who sat out last season after playing in 2017-18 for Pittsburgh in the ACC, had only four points on 2-for-9 shooting in the previous game, a loss to DePaul. In the four defeats, including losses to Oklahoma, Butler and Utah, Carr shot 15 for 52 from the floor for 44 points and went just 4 for 20 from 3-point range.

“For him to be able to show everybody what he’s able to do today should be a really big confidence boost for him,” Oturu said. “We already knew what he was capable of, so just continuing to try to stay consistent is a really big key.”

The Gophers jumped out to a 15-4 lead, withstood three fouls on their star center Oturu, and held a 35-29 halftime edge. They created a double-digit advantage after that without much trouble. Kalscheur came off a screen for a catch-and-shoot 3-pointer on the wing for a 43-30 lead, and Michael Hurt’s 3-pointer with 12:36 remaining pushed a lead to 69-52 before it grew to 22 points.

Hunter Tyson had 12 points and five rebounds off the bench for the Tigers (5-3), who missed nine of their 11 attempts from 3-point range. Leading scorer Tevin Mack, the graduate transfer who previously played at Texas and Alabama, had only two points on 1-for-4 shooting.

“Carr was a problem. I thought his big body really dominated the aisle in the paint and created some things, and then Oturu was just very efficient,” Clemson coach Brad Brownwell said. “We were just on our heels for whatever reason. We wanted to double him a couple times and never really got there.”

Clemson has 11 wins in 20 games in the ACC/Big Ten Challenge, the fourth-most in either conference behind ACC foes Duke (18), Virginia (13) and Wake Forest (12). Minnesota is 10-11 in the 21-year-old contest, which launched on Monday with two games. Miami struck first for the ACC by beating Illinois 81-79. The ACC has an all-time 12-5-3 lead, after each conference won seven games last year.

MATCHED UP, IN MINNESOTA

The Gophers beat the Tigers 89-83 at home in the ACC/Big Ten Challenge in 2015 and, also at Williams Arena, lost to them 90-68 in 2006. That defeat prompted the resignation of coach Dan Monson the following day.

Clemson: The Tigers, who have one of the youngest major conference teams in the country, beat TCU in overtime and lost to then-21st-ranked Colorado last week in a neutral-site tournament in Las Vegas. They were never able to overcome their slow start and were soft on defense the whole way, managing only one block and one steal and forcing only eight turnovers by the Gophers. Brownwell said he sensed some jitters in the locker room before the game.

“This was our first true road game and, as you can see, we didn’t perform to our standards,” said Aamir Simms, who had 11 points.

Minnesota: This was as critical of an early-season game as they come, with those four losses by an average margin of 6.5 points. With six of their 10 nonconference contests against high-major opponents, this underclassmen-heavy team will no doubt benefit later from the tougher-than-usual slate.

With a daunting draw for the Big Ten’s two-game conference-play appetizer on deck next week — on the road against Iowa and at home against sixth-ranked Ohio State — the Gophers needed a confidence boost after those defeats gave them the most overall in the Big Ten through the first four weeks of the schedule.

“We just weren’t doing what we had to do to finish the job. It was all close games and games that we could’ve won easily, so I think we just put all the pieces together tonight,” Carr said.

Clemson: The Tigers have their first ACC road game on Sunday at Florida State. They lost their conference opener to Virginia Tech at home on Nov. 5.

Minnesota: The Gophers have a full week before playing again. Their Big Ten opener is on Dec. 9 at Iowa.