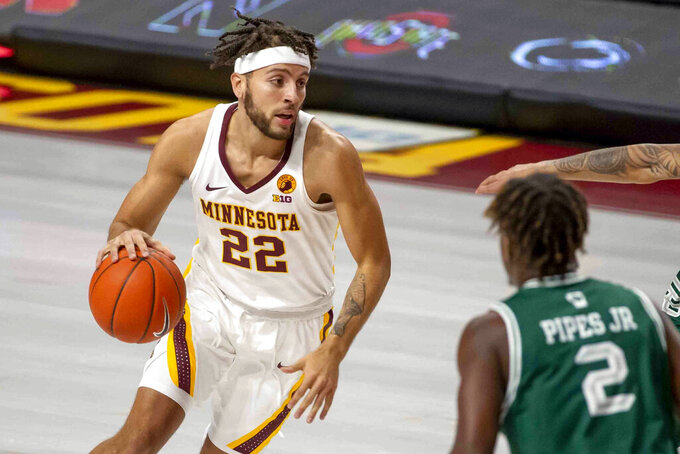 FILE - In this Nov. 25, 2020, file photo, Minnesota guard Gabe Kalscheur dribbles against Green Bay in the first half of an NCAA college basketball game in Minneapolis. Kalscheur has announced he is transferring to Iowa State for his senior season. He is the first of several expected departures from the Gophers following their coaching change. (AP Photo/Bruce Kluckhohn, File)

Kalscheur said on Twitter he was excited about “the next chapter and fresh start” for his college career with the Cyclones.

The 6-foot-4, 200-pound Kalscheur is a native of Minnesota who was recruited by new Gophers coach Ben Johnson, who was an assistant at the time. Kalscheur also played at DeLaSalle High School under coach Dave Thorson, who was just hired as an assistant on Johnson's staff.

Johnson replaced Richard Pitino, who was fired after eight seasons. Kalscheur was the star of Minnesota's only NCAA Tournament win under Pitino, as a freshman in 2019 when he scored 24 points on 5-for-11 shooting from 3-point range against Louisville. Kalscheur was the team's best defender, too, routinely drawing the opponent's top scorer.