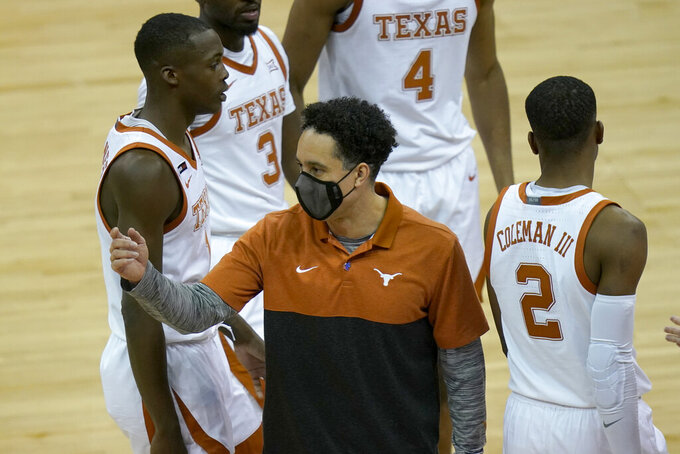 Texas head coach Shaka Smart gathers his team during a timeout in the second half of an NCAA college basketball game against Texas Tech in the quarterfinal round of the Big 12 men's tournament in Kansas City, Mo., Thursday, March 11, 2021. (AP Photo/Orlin Wagner) 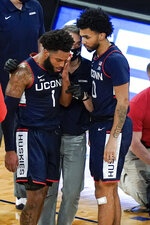 Shaka Smart has lived the highs and the lows of the NCAA Tournament.

In 2011, he coached Virginia Commonwealth on a memorable run to the Final Four, but in the decade that has passed since then, he hasn't even made it back to the Sweet 16. Nobody has to tell Smart — now the coach at Texas — that this event can be unpredictable.

This looks like Smart's best chance in a while to make an extended run. The Longhorns are the No. 3 seed in the East Region after winning the Big 12 Tournament last weekend. They face 14th-seeded Abilene Christian on Saturday night.

VCU was an 11 seed and began that 2011 tournament in the First Four. The Rams ended it in the Final Four, and although they never replicated that run, they became well known for Smart's aggressive “Havoc” defense.

Expectations were understandably high when he took over at Texas before the 2015-16 season, but this is only the third time the Longhorns have made the NCAAs since Smart's arrival.

This season, Texas ranks outside the top 200 in defensive turnover percentage, according to kenpom.com. That's a category Smart's VCU teams led the nation in for three straight seasons.

But the Longhorns (19-7) have been effective at both ends of the court. They enter Saturday's contest on a five-game winning streak after beating Oklahoma State to win the conference tournament.

The pressure is on Smart, not just to win a game but to stick around a while at this year's NCAA Tournament. Texas certainly shouldn't be taking anything for granted.

“I think it’s easy for folks that are not playing or coaching in the games to say, ‘Yeah, this is going to happen and that’s going to happen, and I filled out my bracket,’" Smart said. "It’s TBD. Whoever plays better is going to win. Whoever plays harder is going to go get the loose ball. Whoever runs faster has an advantage in transition. ... If you can get to a place of full acceptance that it is TBD, and that what you do, what you control, plays into that but doesn’t fully determine it by yourself, then you can just go after it.”

The Longhorns did string together several victories the last time college basketball's postseason was played to completion. Texas won the NIT in 2019.

Colorado coach Tad Boyle is already two chapters into a book he’s highly recommending to his players. The Buffaloes don’t even have to go out and purchase it, either.

Included in the NCAA Tournament gift bags for coaches and players is the book “I Came As a Shadow: An Autobiography” by former Georgetown coach John Thompson, along with writer Jesse Washington. Thompson died last year at 78.

The Hoyas just so happen to be the team Colorado faces in the first round Saturday.

“I’m glad it was given. It’s a book our players need to read, quite frankly,” Boyle said. “I didn’t encourage them to start it now or wait until after we played Georgetown. It’s a good read and gives our players perspective on who John Thompson was, because one of the things we don’t do a good enough job of as coaches, I know I need to do a better job, is to really teach the history of the game — appreciate the people who’ve come before them.”

Thompson led the Hoyas to a national championship in 1984. That team was anchored by center Patrick Ewing, the current coach of Georgetown.

UCLA coach Mick Cronin said Johnny Juzang could be back for the 11th-seeded Bruins against BYU on Saturday. Juzang was hurt in the team's win over Michigan State in the First Four.

“We're hopeful he's going to be OK. There's a chance he'll play," Cronin said. "It's hour to hour, not even day to day.”

Cronin wouldn't comment on whether Juzang is dealing with the same ankle injury he's had previously.

Injuries could be significant in the East. Top-seeded Michigan announced last weekend that Isaiah Livers would be out indefinitely because of a stress injury to his foot. Guard Josh Primo, who plays for second-seeded Alabama, hurt his knee during the SEC Tournament.

Connecticut point guard R.J. Cole was injured in the Big East Tournament when he hit his face on the floor, but he's been cleared to play in Saturday night's game against 10th-seeded Maryland.