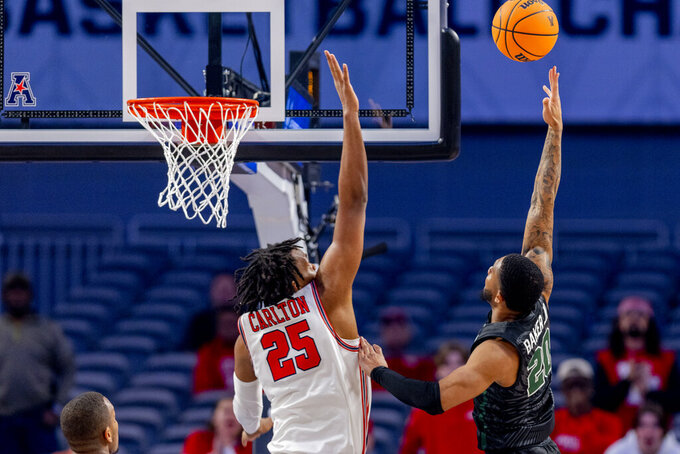 Tulane guard Devon Baker (20) releases a shot over Houston forward Josh Carlton (25) in the first half of an NCAA college basketball game in the semifinals of the American Athletic Conference tournament in Fort Worth, Texas, Saturday, March 12, 2022. (AP Photo/Gareth Patterson)

FORT WORTH, Texas (AP) — Kyler Edwards put more emphasis on what he needed to do for 18th-ranked Houston with standout forward Fabian White hurting. J'Wan Roberts was the player who actually had to replace the big man on the floor.

With big games by Edwards and Roberts, and plenty of other contributions, the Cougars advanced to their fourth consecutive American Athletic Conference Tournament championship game with an 86-66 semifinal win over Tulane on Saturday.

Edwards had 20 points with six 3-pointers, along with eight assists, seven rebounds and only one turnover. Roberts, a 6-foot-7 sophomore, matched a career high with 10 points and added 13 rebounds.

“You always want to step up when your teammates go down, like next-man-up mentality,” Edwards said. “I talked to Fab before the game, he wasn’t feeling good, he said the team really needed me.”

Josh Carlton, like White a graduated senior and first-team all-AAC post player, added 16 points for Cougars (28-5), who matched their win total from last season, when they won their first AAC Tournament title and then made it to the Final Four. Taze Moore added 17 points with seven assists and Ramon Walker Jr. had 11 points with three 3-pointers.

Houston coach Kelvin Sampson said White's back tightened up before the game and didn't respond to treatment. White wanted to play and Sampson started him, but pulled him less than three minutes in after a set play when the 6-foot-8 White came up a foot short on his only shot — a 4-foot hook over his left shoulder.

Jaylen Forbes scored 19 points for Tulane (14-15), which jumped out to a 9-2 lead before White left. Houston responded with an 11-0 run after Sampson called a 30-second timeout.

Carlton had a putback on the possession after that. Carlton punctuated the end to that spurt with a second-chance dunk about three minutes later for a 13-9 lead.

The Green Wave gained their last lead at 16-15 on a layup by Forbes with 10:46 left in the first half. That quickly got wiped out by a pair of 3-pointers.

Edwards had a second-chance 3 with 10:31 left, then Jamal Shead made a steal and Edwards got an assist on a 3-pointer by Walker.

Shead and Edwards hit back-to-back 3s to open Houston's scoring in the second half and extend the margin to double digits. The Cougars built as much as a 21-point lead.

Tulane played its fourth game in a row without first-team all-AAC guard Jalen Cook, the second-year freshman transfer from LSU who averaged 18 points and 3.5 assists per game. He was out with a hamstring injury.

“I am extremely proud of our entire basketball program,” said third-year Tulane coach Ron Hunter, who at times had two sophomores and three freshmen on the court together. “These guys did a lot of great things for Tulane University, and the future is really bright. ... We look at Houston as a standard.”

Tulane: The Green Wave matched their most overall wins in the past seven seasons, and their 10-8 record in AAC games during the regular season was their first winning record in conference play since 9-7 in Conference USA in 2006-07.

Houston: The Cougars lost AAC title games in 2018 and 2019 to Cincinnati, and beat the Bearcats for the 2021 crown after the 2020 tournament was canceled because of the pandemic. White had 18 points when Houston beat Cincinnati in the quarterfinal round of this year's tournament. ... Carlton was scoreless in the first half of the quarterfinal win over Cincinnati after early foul trouble. He had no fouls in 25 minutes against Tulane.

Sampson continually tells his players to never worry about missing a shot.

The Cougars shot over 49% (32 of 65), but also had 17 offensive rebounds and outscored Tulane 30-0 on second-chance points. Roberts and Carlton both had five offensive boards.

“We rebounded over 50% of our misses," Sampson said. “That takes a lot of pressure off your shooters.”

Hunter said the Green Wave want to play in the NCAA Tournament, and until then don't have interest in any other postseason tournaments.

“No disrespect to any of those tournaments, but I didn't come to Tulane to play in the CBI, CIT, CSS," he said, trailing off into a string of letters. “That’s not who we are, it’s not what we want to do.”

The Cougars play in the AAC final Sunday against Memphis, a 70-63 semifinal winner over SMU. The Tigers won both regular-season games against Houston.