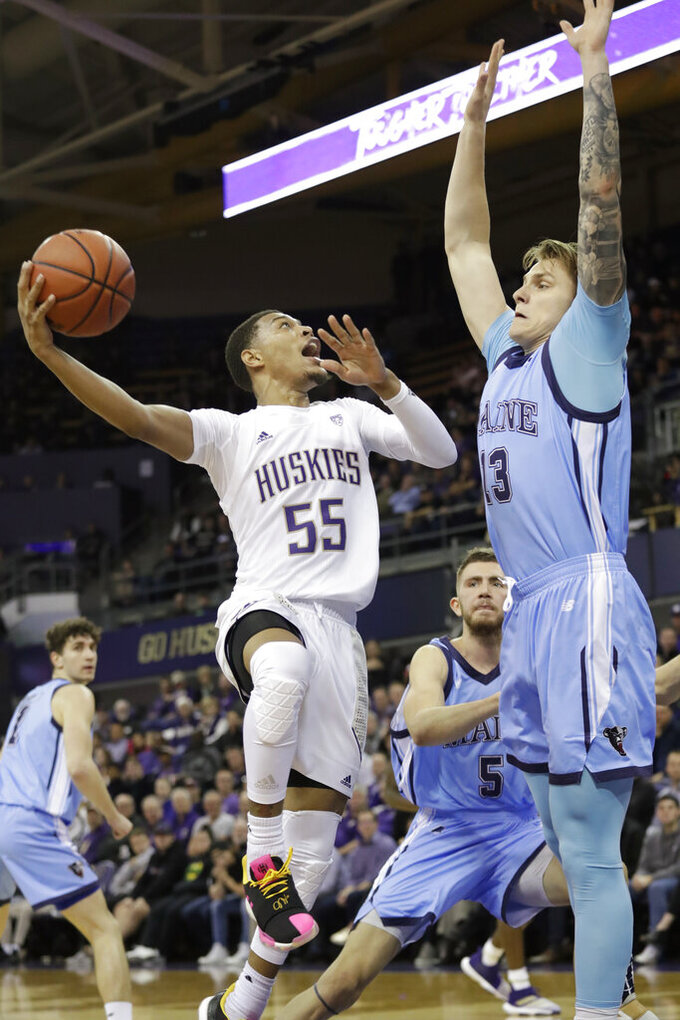 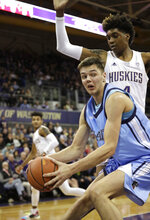 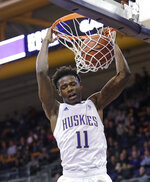 SEATTLE (AP) — Another slow start from No. 25 Washington was quickly erased by a jolt from Nahziah Carter.

Three of them, actually.

Carter’s trio of highlight dunks midway through the first half sparked Washington’s run to take control, and the Huskies pulled away for an easy 72-53 win over Maine on Tuesday night.

Isaiah Stewart dominated on the interior and scored 16 points, Quade Green added 11 points on 5-for-5 shooting, and the Huskies (3-1) rebounded from their first loss of the season after falling to No. 20 Tennessee last weekend on a neutral court in Toronto.

“It’s just coming out with energy. We have to stop the slow starts. We can’t continue to do that,” Stewart said. “We came out slow against Tennessee and we were playing down, playing behind the whole game. Basically bringing that energy from the beginning. We can’t come out like that.”

The Huskies began a stretch of three games in six days with a convincing victory where Washington finally found a rhythm at the offensive end after a sluggish beginning.

The Huskies shot a season-best 46% despite going just 3 of 15 on 3-point attempts. Stewart, the Huskies’ bruising 6-foot-9 freshman, overpowered the Bears in the paint. But getting Green going offensively was an important development as he is Washington’s most experienced guard. The Kentucky transfer was shooting just 30% from the field through the first three games.

“I thought he set the tone,” Washington coach Mike Hopkins said if Green. “He shared the ball, he pushed the ball. He took the right shots. He played within himself. I thought he played exceptionally hard on the defensive end. He got better tonight, no question.

Andrew Fleming and Nedeljko Prijovic led the Black Bears (1-3) with 18 points each. Maine was unable to overcome shooting just 33% and committing 14 turnovers in the first half.

Washington started sluggishly for the fourth straight game, but quickly got its offense ignited thanks to Carter. Washington scored 15 straight points midway through the first half, including a trio of highlight dunks from the junior. Carter’s first came off a lob from Jaden McDaniels. He added another lob dunk from Green and capped his five minutes of highlights with a windmill dunk on a breakaway that gave Washington a 32-13 lead.

Asked what he thought of the final dunk of the trio, Hopkins grinned.

“You better make it, or you’ll be sitting next to me,” Hopkins said.

Peter Stumer finally snapped the run with a 3 for the Black Bears, but any chance Maine had of keeping the game close was gone. Washington led 36-18 at halftime and by as many as 24 in the second half.

Washington has been almost an exclusively zone defense team since Hopkins’ arrival. But the Huskies are using more man-to-man early this season to see how effective it is against opponents. Washington started against Maine in man-to-man before switching to the zone after about 5 minutes.

The zone is still going to be Washington’s primary defense.

“With our length if we can get this zone going it could be really, really disruptive,” Hopkins said.

Maine: The Black Bears concluded a rare cross-country road trip with an expected result. Maine fell at Portland last Saturday before making the trip to Seattle. The upcoming schedule won’t get much easier for Maine with upcoming games at Connecticut and at defending national champion Virginia. The trip to the Northwest isn’t Maine’s longest of the season. The Bears will travel to Hawaii for a game on Dec. 29.

Washington: Carter finished with just eight points, all of them coming on dunks. That’s 10 points below his season average of 18.3 coming into the game. ... McDaniels was just 4-for-17 shooting, but finished with 11 points. ... The Huskies reached 70 points for the first time this season. ... Freshmen Marcus Tsohonis and RaeQuan Battle saw their first action of the season.