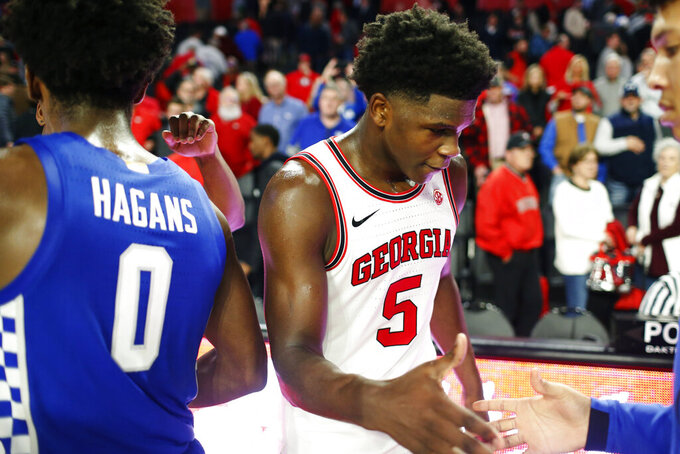 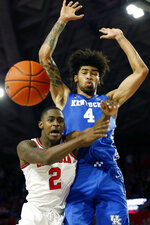 Here are a few things to watch in Southeastern Conference basketball as it heads into the second weekend of league competition.

Georgia (10-4, 0-1) at No. 5 Auburn (14-0, 2-0): The top-ranked team in the Southeastern Conference matches up with the league’s most heralded pro prospect Saturday when Auburn hosts Anthony Edwards and his Georgia teammates. Edwards scored 23 points but Georgia couldn’t protect a six-point halftime lead Tuesday as it opened its SEC schedule with a 78-69 home loss to No. 14 Kentucky. Auburn barely maintained its unbeaten status as it eked out an 83-79 home victory over Vanderbilt on Wednesday. Auburn has won 26 of its last 27 games and has 11 straight SEC victories.

Has Florida found its groove? Florida opened the season ranked sixth in the Top 25 but struggled through a nonconference schedule in which it lost to No. 10 Florida State, Connecticut, No. 6 Butler and Utah State. But the Gators may have turned a corner when they opened their SEC schedule by erasing a 21-point deficit in a 104-98 double-overtime victory over Alabama. Florida (10-4, 2-0) followed that up with an 81-68 triumph at South Carolina. Florida visits Missouri and hosts Mississippi in its next two contests before a demanding three-game stretch in which it hosts Auburn, visits LSU and hosts No. 4 Baylor.

Auburn and No. 7 San Diego State are the only undefeated Division I teams. ... Alabama has scored at least 90 points in five straight games, the first time in school history it has put together such a streak. ... SEC scoring leader Aaron Nesmith of Vanderbilt is averaging 23 points and 4.3 3-pointers per game, and he’s making 52.2% of his 3-point attempts. ... Florida’s rally from a 21-point deficit against Alabama marked the Gators’ biggest come-from-behind victory ever. Florida had dug its way out of an 18-point hole in victories over South Carolina in February 1993 and Alabama in February 2007 .

Kentucky forward Nick Richards has raised his game just in time for the start of SEC competition. After playing just 12 minutes and scoring two points with no rebounds in a Dec. 21 loss to No. 11 Ohio State, Richards bounced back with a double-double a week later in an overtime victory over No. 13 Louisville. He has followed that up by collecting 21 points and 12 rebounds against Missouri and then scoring 17 against Georgia. Over his last three games, Richards has averaged 17 points and 9.7 rebounds.

Kentucky's Rhyne Howard tied Jennifer O'Neill's school single-game scoring record by collecting 43 points Thursday in the 14th-ranked Wildcats' 81-71 victory over Alabama. That came four days after Howard scored 37 points in an 80-76 triumph over No. 23 Tennessee. Howard is the first Kentucky player to score at least 25 points in five straight games. ... LSU won 57-54 at No. 10 Texas A&M on Thursday for its first road victory over a top 10 team since beating No. 5 Tennessee on Jan. 2, 2014. Texas A&M star guard Chennedy Carter left the game late in the first half after injuring her left ankle. ... Tennessee's 84-28 blowout of Ole Miss on Thursday was the lowest point total the Lady Vols have allowed in an SEC game. It's the third-lowest point total they have allowed against any team. ... Tennessee entered Thursday’s action leading the nation in rebound margin (plus-15.8). No. 4 South Carolina (8.2) ranked first and Tennessee ranked third (6.9) in blocked shots per game.