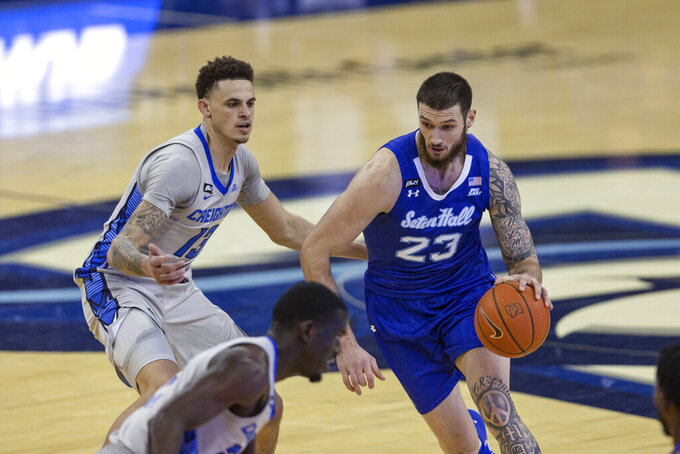 OMAHA, Neb. (AP) — Damien Jefferson scored 16 of his season-high 19 points in the first half and No. 7 Creighton got off to a fast start on its way to an 89-53 victory over Seton Hall on Wednesday night.

The loss ended a three-game win streak for Seton Hall (8-5, 5-2) and was coach Kevin Willard's most lopsided defeat in his 11 seasons.

Denzel Mahoney had 14 points and Marcus Zegarowski added 11 for the Bluejays, who moved into second place in the Big East behind Villanova.

Sandro Mamukelashvili led the Pirates with 14 points and Jared Rhoden had 10.

Creighton came into the game having won its last three by a total of nine points. This one was never close.

The Bluejays made their first seven shots, with Zegarowski hitting two 3-pointers, and led 17-4 less than five minutes in.

Jefferson started 7 for 8 from the field, and his 3 gave Creighton its biggest lead of the first half, 32-19.

Back-to-back 3s by Mahoney and Zegarowski during a flurry to open the second half expanded the cushion. The bulge grew to 42 points in the last three minutes.

It was the second straight game Jefferson set a season high for points. He scored 18 on 9-for-13 shooting at Providence last Saturday.

Seton Hall was playing at CHI Health Center for the second time in a little more than a month. The Pirates lost 83-70 to Oregon on Dec. 4 in a game set up on short notice for reasons tied to the COVID-19 pandemic.

Seton Hall: The Pirates were playing as well as anyone in the Big East until this clunker. Their 33% shooting from the field was their worst of the season, and their 16.7% accuracy on 3s (3 of 18) was a season low.

Creighton: The game illustrated the Bluejays' offensive depth. Just about anyone in the eight-man rotation can step up. This time it was Jefferson. Mitch Ballock, who came in averaging just under 14 points per game and has been one of the team's most prolific 3-point shooters in his four seasons, didn't get his first shot off until five minutes into the second half.

Seton Hall backup guard Bryce Aiken injured his right ankle for the second time this season when he stepped awkwardly on Zegarowski's foot early in the game. Aiken was helped off the court and went to the locker room. The first injury kept him out of six games.