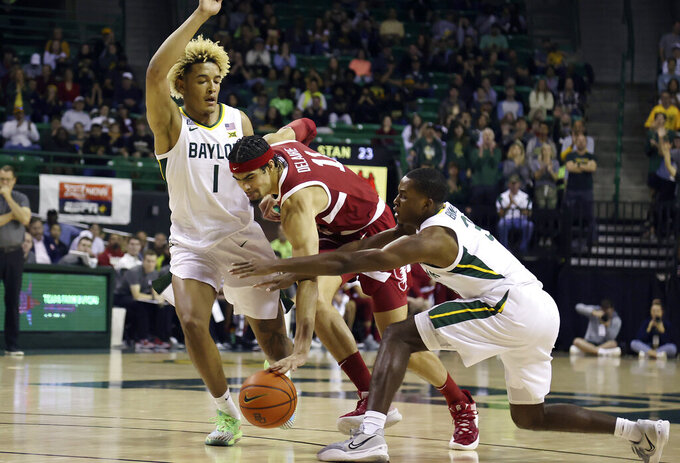 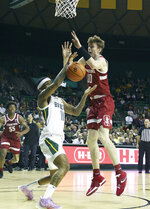 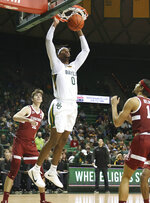 WACO, Texas (AP) — Baylor coach Scott Drew wanted a bigger-name opponent before heading to a tournament in the Bahamas, and saw something he said looked like a tough Big 12 game in the first half against Stanford.

The second half for the ninth-ranked Bears looked more like the blowouts of the first three games against lesser-known foes.

LJ Cryer scored 21 points and James Akinjo had 11 points with a career high-tying 11 assists, leading Baylor to an 86-48 victory over the Cardinal on Saturday.

A game after matching a school record with 21 steals in a 92-47 win over Central Arkansas, the Bears (4-0) had nine during a 26-2 run that covered nearly 10 minutes in the second half and ended with Baylor in front 60-31. The defending national champions finished with 16 steals.

“One thing, when you’re making shots, you get a couple of dunks, you can say what you want, but when you do that, you play a little harder on the defensive end,” Drew said. “Our guys played hard both halves. But that extra juice from getting out, and then once you get separation it makes it tough for a road team to continue to persevere and execute.”

Freshman Kendall Brown scored 15 points in the first meeting between the schools in 34 years. It was the first victory for the Bears in the fourth matchup in the series.

Jaiden Delaire and Spencer Jones scored 10 points apiece for Stanford (3-2), which shot 29% while getting outscored 52-20 in the second half of the school's first-ever trip to Waco. Both losses are in true road games.

The Bears forced 22 turnovers and outscored Stanford 28-6 in points off turnovers while extending their arena record with a 17th consecutive home victory. They also earned their 28th straight win in nonconference games.

“The second half we were completely overwhelmed,” Stanford coach Jerod Haase said. “It doesn’t take a rocket scientist to figure out the turnovers, transition baskets because of that just changed the whole tone of the game.”

Stanford: Freshman Harrison Ingram has cooled off after three double-digit scoring games to start his career. Playing about 100 miles from his high school campus in Dallas, Ingram was held to four points for a second consecutive game, although he had a game-high nine rebounds.

“At this point I’d say there’s not enough data points to say there’s a trend that he’s started fast and going slow,” Haase said. “I would simply say it’s a couple of games where he didn’t have as many points. I think he’s going to have a fantastic freshman year as a whole.”

Baylor: Akinjo, a senior transfer, had his second consecutive double-double after none in his first 68 college games (40 at Georgetown, 26 at Arizona and two at Baylor). This outing came against a familiar foe, having played Stanford twice in the Pac-12 last season. Akinjo's other game with 11 assists came as a freshman with Georgetown against Creighton in 2018-19.

“When you win big, it's the opportunity as a point guard to showcase your court vision, showcase your playmaking ability,” Akinjo said. “I know we've got talented players on this team, so I know that every game I'm not going to be needing to score the ball.”

Cryer hit two late jumpers, including a 3-pointer, to give the sophomore another career high in scoring while going 5 of 9 from long range. He had 20 points in each of the previous two game.s

The Bears were without guard Adam Flagler, who is nursing an injured left (non-shooting) hand but could play in the Bahamas. Drew said he's cleared to play, but pain sometimes makes it difficult.

Drew announced a couple of hours after Saturday's game that redshirt freshman forward Dain Dainja has decided to transfer from Baylor. Dainja redshirted last season when the Bears won the national championship. He returned after offseason foot surgery to play off the bench in the Bears’ first three games this season, accumulating six points, three rebounds and one block in eight total minutes.

Baylor: Arizona State in the Battle 4 Atlantis tournament in the Bahamas on Wednesday.