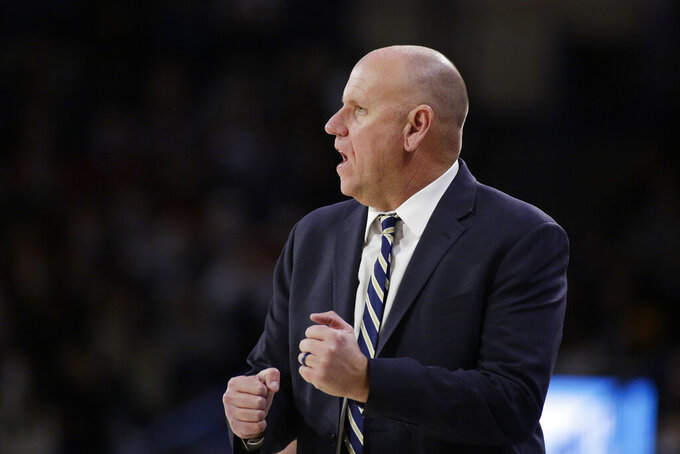 FILE - Northern Arizona head coach Shane Burcar directs his team during the second half of an NCAA college basketball game against Gonzaga, Monday, Dec. 20, 2021, in Spokane, Wash. Northern Arizona has labored the past two seasons under coach Shane Burcar, winning 15 combined games. With a veteran roster coming returning and a new high-tech performance center to lure recruits, the Lumberjacks could be on the cusp of rounding the corner. (AP Photo/Young Kwak, File)

FLAGSTAFF, Ariz. (AP) — Shane Burcar sits in the front row of the large auditorium as a thunderstorm rolls over Flagstaff's San Francisco Peaks onto the Northern Arizona campus.

The wall of windows on the room's north side offers a perfect view of the lightning strikes and approaching rain moving through the pine trees.

The building the auditorium is in, the new $47 million Student-Athlete High Performance Center, gives Burcar something he's never had in four years as Northern Arizona's coach: a top-of-the-line facility to show prospective basketball recruits.

“It really is a game-changer,” Burcar said. “When we're competing with a (similar) school, nobody has a better facility than us. I don’t say that to brag or say anything negative about another school, but there’s nobody who has this right now."

The performance center, which opened in April, could be the missing piece Burcar needs to get NAU back on the right track. The Lumberjacks have not been to the NCAA Tournament since 2000 and notched single-digit wins five of the past seven seasons.

Burcar was named interim coach in 2019, when Jack Murphy left to coach at his alma mater, Arizona. The Lumberjacks won 16 games in Burcar's first season, earning him the permanent job, but have been unable to keep up that pace.

Northern Arizona labored through a pandemic-altered 2020-21 season — as did many other programs — to win six games and went 9-16 last year with one of Division I's youngest teams.

The Lumberjacks could be poised to round the corner toward a better future.

This year's team returns all five starters, bringing a year of experience with them.

Junior guard Jalen Cone averaged 18.8 points last season after transferring from Virginia Tech and is expected to take on more of a leadership role. Nik Mains, a 6-foot-8 stretch forward, opted to return instead of hitting the transfer portal after averaging 11.5 points last year. Junior forward Keith Haymon also is back for his fourth season in Flagstaff after averaging 9.8 points a year ago.

Northern Arizona also added freshmen C.J. Ford, Oakland Fort, Preston Kilbert and Jack Wistrcill, all of whom should have an impact on the program this season and beyond.

“The trajectory is absolutely to move up the standings,” Burcar said. “I would say if we don't win it all, we will certainly have a bye in the first round of the Big Sky tournament. I don't think that's a pipe dream at all.”

The new performance center could keep filling up the talent pipeline.

Northern Arizona coaches could always sell the school's picturesque campus, but the facilities were not on the same level. The Lumberjacks play most of their early-season home games at the Rolle Center, which is shared with multiple sports and PE classes, and the massive Walkup Skydome once football season ends.

The three-story, 72,000-square-foot performance center has two full basketball courts with a video screen in between, massive weight and training rooms, academic and nutrition centers, and multiple meeting rooms.

It also has the room with a view.

“The building kind of sells itself,” Burcar said. “We saw it with our camps this year, the high school coaches coming up and, 'OK, they're serious about winning.' You can see pictures of it, but when you get here and touch it and walk on it, it's a whole different deal."

Burcar has a grand view for the program and it's not just the one out the back window of the auditorium.