Payne faces many challenges as rookie coach with Louisville 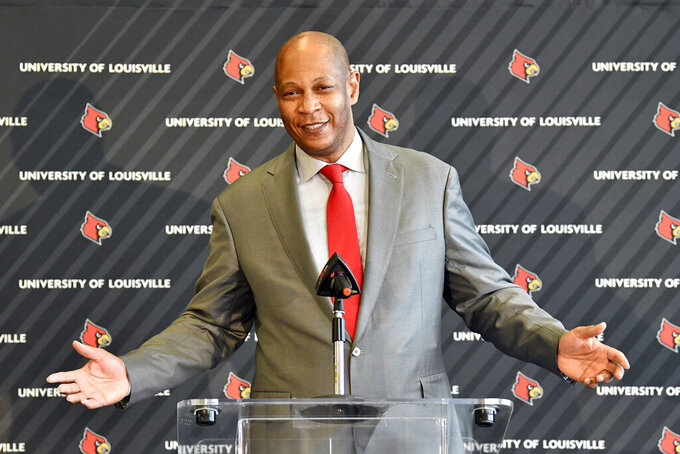 FILE - Kenny Payne, newly named coach of the Louisville basketball team, gestures during a news conference in Louisville, Ky., March 18, 2022. As if being a rookie head coach wasn’t challenging enough,Payne must rebuild a Louisville program where he was part of its storied past while learning the ropes. (AP Photo/Timothy D. Easley, File) 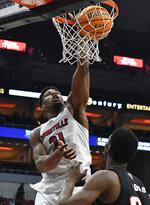 LOUISVILLE, Ky. (AP) — As if being a rookie head coach wasn’t challenging enough, Kenny Payne must rebuild a Louisville program where he was part of its storied past while learning the ropes.

It would be one thing if his task was limited to the court, where Payne must blend his few returning Cardinals with transfers and underclassmen. But he must also lead his team from the cloud of several scandals, with an independent panel deciding punishment for the latest allegations.

Reconnecting with a Louisville fan base tired of the drama is another part of the mission for Payne, who seems emboldened to restore his alma mater’s luster on all fronts. In due time.

Payne, 55, will start with a clean slate of sorts since taking over last March following the second interim coaching stint of Mike Pegues after Chris Mack’s departure on Jan. 26.

As for pressure, Payne doesn't feel it with a championship pedigree and coaching background that prepared him for the task ahead. The Mississippi native spent nearly two NBA seasons as a New York Knicks assistant following a 10-year tenure at archrival Kentucky on John Calipari’s staff, highlighted by the 2012 NCAA championship.

The ex-Cardinal who scored 1,083 points from 1985-89 at Louisville and was a freshman on Louisville's 1986 NCAA title team was first mentioned as a possible candidate following the controversial firing of Hall of Famer Rick Pitino after a 2017 corruption scandal.

Mack eventually got the job and took Louisville to the 2019 NCAA Tournament his first season but the Cardinals haven't returned since. Payne got the call this time around.

Judging from the throng of Louisville basketball alumni who attended his introduction and subsequent events, including Crum, he won’t have to do it alone.

“You look at all of the former athletes and former basketball players that came back to support him, and that’s something that really hadn’t been around here for a while," former Louisville great and NBA veteran Junior Bridgeman said. "And now, let us look forward to what he’s going to do in the future.”

“He’s an honest guy and everything he says, you take heed in,” Curry said.

Payne’s assistant coaching hires were noteworthy because of who he got and where they came from. Nolan Smith, son of ex-Cardinal Derek Smith, came over from Duke soon after Mike Krzyzewski’s finale, followed by ex-Wake Forest and Maryland head coach Danny Manning and Josh Jamieson. Former Louisville scoring great Milt Wagner is the program’s director of player personnel.

Payne said he talked recently with Kentucky coach John Calipari, who told him to take a breath and take his time. Easier said than done.

Louisville opens against crosstown Bellarmine on Nov. 9 before eventually facing Arkansas on Nov. 21 in the first of several tests at the Maui Invitational that includes Creighton and Texas Tech. The Cardinals host Maryland in the Big Ten/ACC Challenge and open conference play on Dec. 4 against Miami. They will resume the annual Bluegrass rivalry against No. 4 Kentucky on Dec. 31.