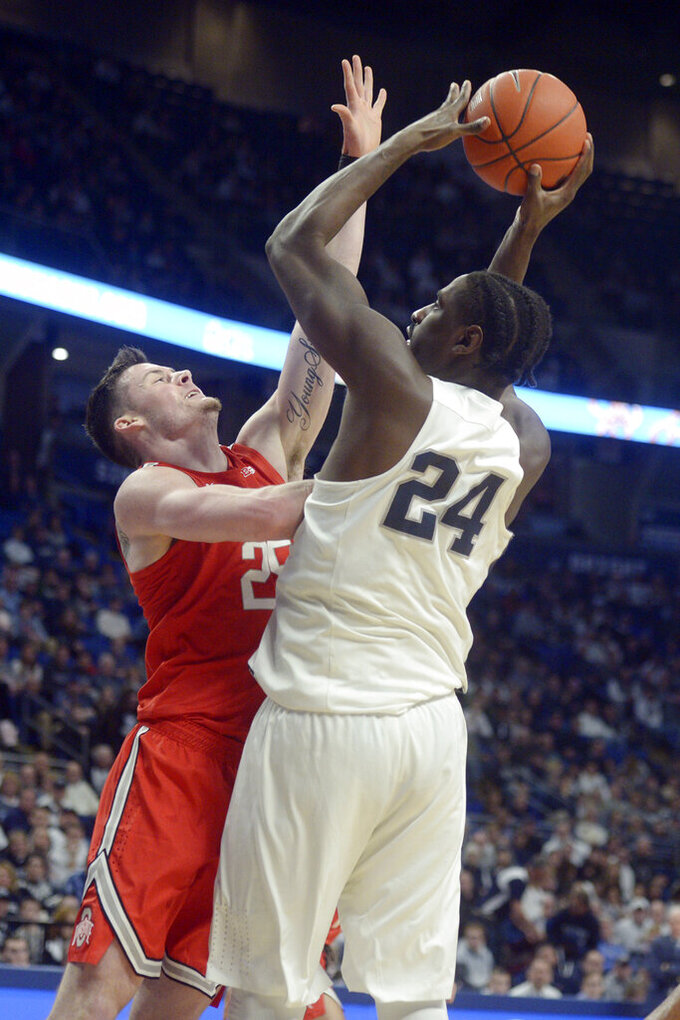 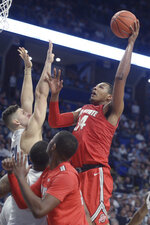 Stevens scored 14 of his 24 points in the second half and Penn State defeated No. 21 Ohio State 90-76 Saturday to keep pace in the Big Ten.

Myreon Jones scored 20 points, Seth Lundy added 12 and Myles Dread had 10 for the Nittany Lions (13-5, 3-4 Big Ten) who snapped a three-game losing streak and led by double digits for most of the afternoon.

“I don’t think we made any adjustments,” Stevens said. “When we went there, they punched us and we weren’t able to respond. They had one of those games where they weren’t missing anything.”

The tables were turned on Saturday. The Buckeyes made just 23 of 54 field goals and endured long scoreless droughts in the first half.

Duane Washington Jr. had 20 points, Kaleb Wesson scored 19 points and Andre Wesson added 12 for the Buckeyes, who trailed by 15 at halftime and by as many as 20 with 15:10 to play.

Kaleb Wesson’s 3-pointer pulled the Buckeyes within 12 with 2:39 left, but they didn’t get closer.

“Our effort wasn’t quite what it needs to be for sure,” Ohio State coach Chris Holtmann said. “I thought it was our worst defensive effort of the year, but give them credit, they hit a lot of difficult shots.”

Ohio State’s lone lead came in the opening minutes before Penn State used an 11-0 run to take control midway through the first half.

Washington broke up the run with a 3-pointer, Ohio State’s first basket in nearly five minutes, before Penn State extended the lead to 14 with a run that included five points from Stevens.

The do-it-all forward said he became a “good cheerleader” after he picked up his third foul early in the second half.

The Buckeyes cut Penn State’s lead to seven with Andre Wesson’s third 3-pointer of the half, but the Nittany Lions used a 14-6 run over the final 3:14 to take a 42-27 lead into the locker room.

“We had a little bit of a losing streak there, and you never want one to lead to two, two to lead to three,” Penn State coach Patrick Chambers said. “We can get better, this was a great game for us. But you’ve got to put it back-to-back-to-back.”

Stevens joined Taylor Battle as the only Penn State players to score 1,000 points in the Big Ten. Stevens hit the milestone with his second make of the game — a 3-pointer that gave Penn State the lead for good just 2:50 in.

After struggling through just the fourth scoreless game of his career a week ago, Mike Watkins has excelled in back-to-back games coming off the bench.

He checked into Saturday’s game with 16:36 on the clock and received a standing ovation from most of the 14,785 in attendance.

Penn State’s strong second-half start was fueled by its second five, who got some early action after Stevens picked up his third foul in the opening moments.

Myles Dread sparked a 12-3 run with a 3-pointer, Lundy added another, forward John Harrar added a dunk and a layup and Izaiah Brockington capped the run with a short jumper that put Penn State up 56-36.

Luther Muhammad and Washington returned from one-game suspensions. Holtmann imposed the bans for undisclosed reasons before the team’s last game.

Ohio State: The Buckeyes have struggled to score during their recent skid. They’d been held to fewer than 60 points in each of their last four losses. While they eclipsed the 60-point threshold, they whiffed on easy shots all afternoon, missing 13 layups or dunks.

Penn State: The Nittany Lions did what they do best -- played strong defense, forced their opponents into mistakes and capitalized on them. The Big Ten’s leader in steals and turnover margin per game forced 13 giveaways with nine steals, seven blocks and scored 19 points off of turnovers.