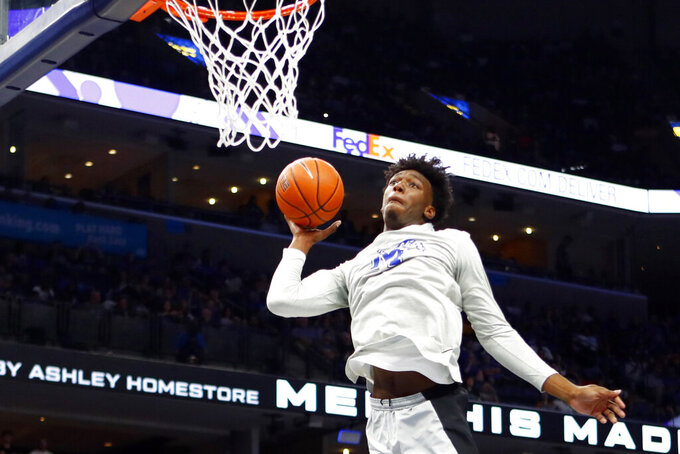 MEMPHIS, Tennessee (AP) — Penny Hardaway enters his second season as Memphis coach with the top freshman class in the country and a bit of swagger to coincide with a preseason Top 25 ranking.

And if Hardaway is feeling any pressure, he isn't showing it. In fact, he's embracing it.

"I want all the smoke," Hardaway said, which has become the mantra of the Tiger program.

Led by the 7-foot center James Wiseman, the No. 1 recruit in the country and a preseason All-American, Memphis has a cast of talented freshmen and a preseason No. 14 ranking and is eager to take the next step back to national to prominence.

Hiring Hardaway brought back excitement to the Tigers men's basketball program. In his first season Memphis finished 22-14 overall and 11-7 in the American Athletic Conference. The Tigers reached the second round of the National Invitation Tournament before being eliminated by Creighton.

That was a mere appetizer for what's expected his season.

Once Wiseman committed to the Tigers, top recruits including Precious Achiuwa, Lester Quinones and DJ Jeffries joined Wiseman and Malcolm Dandridge, Wiseman's teammate at East High in Memphis. Guard Boogie Ellis decided to leave Duke and sign with the Tigers.

The freshmen have created a frenzy for Memphis fans, selling out the FedExForum for Memphis Madness with season tickets once again in demand.

The Tigers are ranked for the first time since 2013. Still, there are still some questions whether Hardaway's NBA DNA will translate to success as a coach. Hardaway said he feels like he can coach.

"I don't know if I've proved myself yet, but I'm always a work in progress ...," Hardaway said. "I think I'm earning the respect of my peers that I do know what I'm doing."

Some other things to know about Memphis this season:

With all the talk about the freshman class, Hardaway has some returning players from last season who will contribute, including guards Tyler Harris and Alex Lomax — both highly touted from the 2018 class. Harris averaged 10.8 points a game and shot 31.5% from 3-point range. Lomax earned his stripes on defense with 35 steals. Isaiah Maurice, a 6-10 forward, is the lone senior on the squad.

A deeper bench could mean less pressure on Harris, who drew a lot of attention and faced tough, sometimes multiple, defenders. Hardaway said having Wiseman and Achiuwa on the front line will force teams to lower their attention on Harris.

Memphis and Houston were picked to finish tied for first in the conference. The Cougars, last season's regular-season champ lost four starters from a Sweet 16 team and received more first-place votes (seven) than Memphis (four). Wiseman was the only Tiger picked for either first or second team all-conference.

The Tigers get a test in the third game of the season, traveling to Portland to face No. 15 Oregon. Initially, the game was promoted as a showdown between two top recruits — Wiseman and N'Faly Dante, Oregon's 6-foot-11 center. The NCAA declared Dante ineligible for the first nine games after the NCAA missed his clearance date.

Memphis also hosts Mississippi and Georgia from the Southeastern Conference during a bulked-up nonconference slate that includes a trip to Tennessee on Dec. 14. The Tigers will get their AAC challenge playing Houston twice in the final five league games.

The surprise of the Tigers preseason, including a trip to the Bahamas for a quartet of August games, was 6-foot-3 guard Damion Baugh. He has displayed a tenacious motor, especially on defense and enough athletic ability that he leaped over Wiseman in the Memphis Madness Dunk Contest.

Hardaway got a lot of attention — and criticism — by saying his team "wants all the smoke." He isn't backing down from the statement.

"It's just taking on the personality of the city," he said. "Memphis is a city that likes to compete at everything we do. If you tell us we can't do something, we're going to prove you wrong."