Pick Six: Backcourt stars have chance to shine in NCAAs 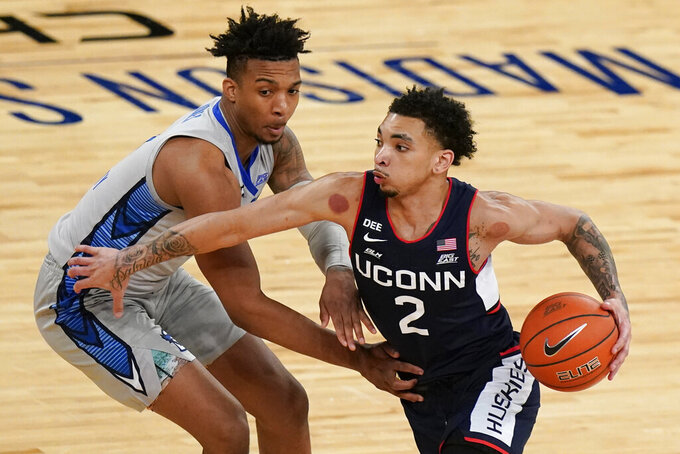 INDIANAPOLIS (AP) — Six months after Dan Hurley was hired to resurrect Connecticut, which had just gone through a messy divorce with Kevin Ollie, the former Wagner and Rhode Island coach landed the commitment that would go a long way toward helping.

That's when James Bouknight became the first player to commit to his first real recruiting class.

Fast-forward a few years and not only does Hurley have the Huskies back in the NCAA Tournament, he has one of the best floor generals in college basketball leading the way. Bouknight has developed into a scoring machine, averaging more than 20 points a game, while leading seventh-seeded UConn into a first-round game against No. 10 seed Maryland.

“He's done so much for UConn basketball,” Hurley said. “His decision to come here has changed the landscape.”

There are a lot of coaches that have similar feelings about their own backcourts.

The NCAA Tournament always seems to put a premium on guard play, and that may be even more important during this most bizarre of tournaments. So here's a look at other backcourt wizards looking to make their mark on March.

Talk about the rather shallow history of Buffaloes hoops and the discussion inevitably turns to Chauncey Billups, who parlayed a dazzling career in Boulder that included all kinds of records into a standout NBA career.

Wright has etched his name right alongside Billups this season.

The senior guard, who returned to Colorado after initially declaring for the NBA draft, became the first Pac-12 player to top 1,700 points, 600 rebounds and 600 assists. He's averaging 15.5 points, 4.3 boards and 5.6 assists on the season.

“I continue to say this almost every media interview," Wright said during the Pac-12 Tournament, "when I got my coaches and teammates believing in me the way they do, it just makes my job so much easier."

Luka Garza gets most of the headlines for the Hawkeyes as a unanimous first-team All-American, but a lot of his school-record point total has come thanks to his backcourt of Bohannon, Connor McCaffery and Joe Toussaint.

Bohannon averaged 4.5 assists this season, helping the Hawkeyes lead the nation with 19.1 per game. He also was smart with the rock, helping them to the best assist-to-turnover rate in the nation, too.

After beginning his career at Oregon State, the high-flying McLaughlin has found a home in Santa Barbara, leading the Gauchos to a Big West Tournament title and a game against fifth-seeded Creighton in the NCAA Tournament.

He was at his best in the conference tournament, too, averaging more than 20 points over the three games.

“JaQuori has had such a great season,” Gauchos coach Joe Pasternack said. “His unselfishness is such a huge part of this team and he just makes everyone else better. He is so deserving of everything positive that comes his way.”

He began his career at Stony Brook, detoured to Division II school Southern New Hampshire, but as a graduate student at Appalachian State, Almonacy has come into his own. He leads a four-guard offense alongside Justin Forrest, Adrian Delph and Donovan Gregory that could give No. 1 seed fits if it survives a First Four game against Norfolk State.

“It’s been so rewarding to prove all the doubters wrong," said Almonacy, who poured in 32 points in the Sun Belt tourney title game to book an NCAA Tournament trip, "and show I could play at this level.”

Good luck finding anybody hotter than the Gators' sophomore guard, who is averaging 23.5 points over his past four games and dazzled with a career-high 30 points in a loss to Tennessee in the SEC Tournament quarterfinals.

Mann can do just about everything, too. He pulled down 13 boards to go with 19 points in a win over Auburn in February.

The three-time Southern Conference defensive player of the year can beat you on the offensive end, too. Miller averages 19.3 points and 4.0 assists, and he poured in 25 points and had 12 boards and six assists in the SoCon final.

Upsets tend to happen in the NCAA Tournament when teams play defense and avoid turnovers, and Miller's proficiency in both of those areas is a big reason why the No. 13 seed Spartans have a shot against No. 4 seed Florida State.