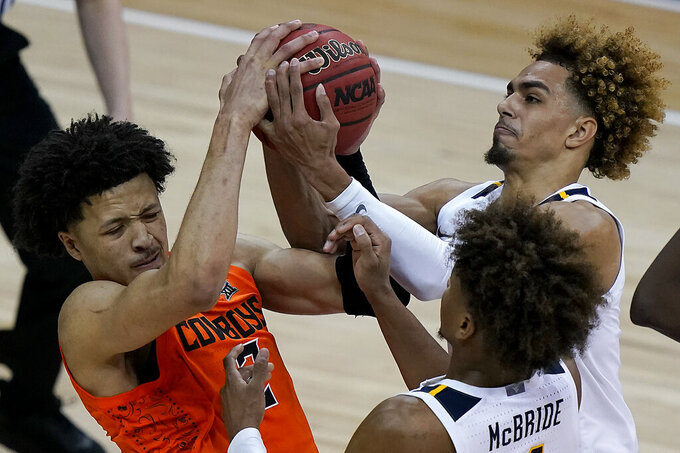 West Virginia's Emmitt Matthews Jr., back, and Miles McBride try to steal the ball away from Oklahoma State's Cade Cunningham during the second half of an NCAA college basketball game in the second round of the Big 12 Conference tournament in Kansas City, Mo., Thursday, March 11, 2021. Oklahoma State won 72-69. (AP Photo/Charlie Riedel)

Cade Cunningham always figured he’d get a chance to play in the NCAA Tournament even after he enrolled at a school facing a postseason ban.

Oklahoma State was sanctioned by the NCAA back in June stemming from a federal corruption investigation into college basketball. Those penalties included a one-year restriction from the postseason.

Cunningham, the nation’s No. 1 overall recruit in his class, committed to Oklahoma State anyway, maintaining his faith that the postseason issue would work out in his favor. Playing for the Cowboys kept him within a four-hour drive of his 2-year-old daughter, Riley, in Texas. It also enabled him to join his older brother, Cannen, an assistant coach on Oklahoma State’s staff.

“To be completely honest with you, I knew that if we did what we had to in all the regular-season games, I know how this works,” Cunningham said. “They were going to put us in.”

The Cowboys (20-8) are playing because the sanctions remain under appeal, giving the likely No. 1 pick in this year’s NBA draft an NCAA Tournament showcase.

Oklahoma State, the No. 4 seed in the Midwest Region, will try to earn its first NCAA Tournament victory since 2009 when it faces Atlantic Sun champion Liberty (23-5) at Indiana Farmers Coliseum in Indianapolis.

“I think we have a team that can beat anybody in the field,” Oklahoma State coach Mike Boynton said. “Certainly there are a lot of factors that go into each game, but I’ll say this: There’s not anybody we could play that I wouldn’t go into the game thinking I have the best player in the game.”

Cunningham led Oklahoma State to its first NCAA Tournament berth since 2017 while the Cowboys dealt with the distraction of the potential ban.

“Obviously with the ban, we feel like the school didn’t do anything wrong, but it was put in place,” Cunningham said.

Cunningham certainly did his part to make his team worth including.

The 6-foot-8 freshman guard is the first Oklahoma State player to earn first-team Associated Press All-America honors. He leads the Big 12 in scoring (20.2 points per game) and averaged 6.3 rebounds and 3.6 assists. Cunningham joined Kevin Durant, Michael Beasley and Marcus Smart in earning Big 12 player of the year and freshman of the year honors in the same season.

Boynton said Cunningham has been a solid teammate who's deferred credit to others.

But he certainly realizes how good he is.

That was apparent this week when Cunningham was asked if he knew how Carmelo Anthony led Syracuse to a 2003 NCAA Tournament title as a freshman.

“I’ve been saying I wanted to have a Melo-type year since I got here,” Cunningham said. He later added that “Melo’s (are) big shoes to fill, but I’m up for the challenge.”

Cunningham has experienced the thrill of March Madness before. Cunningham said this week that he and a friend were working as ball boys for a 2013 regional semifinal when Michigan’s Trey Burke hit a 3-pointer in the closing seconds of regulation to help the Wolverines beat Kansas in overtime at Arlington, Texas.

“I’m right under the goal when he hits the 3,” Cunningham said. “It was just like one of the craziest moments of my life.”

Now he gets a chance to create his own March memories.

Here are some other Midwest Region story lines heading into Friday’s action:

Georgia Tech is playing its first NCAA Tournament game since 2010 but may have to do it without its best player.

Yellow Jackets coach Josh Pastner said this week that a member of his school’s traveling party had tested positive for the coronavirus and wouldn’t be available unless Georgia Tech (17-8) reached a regional semifinal.

Pastner didn’t identify the person, but Stadium reported that ACC player of the year Moses Wright won't be able to play in the ninth-seeded Yellow Jackets' first-round game with No. 8 seed Loyola Chicago (24-4).

Former Indiana coach Kelvin Sampson will be making his return to Assembly Hall when his second-seeded Cougars (24-3) face No. 15 seed Cleveland State (19-7) in Bloomington.

Sampson was Indiana's coach from 2006-08. He received a five-year show cause order from the NCAA in 2008 due to violations involving impermissible calls he made to recruits while coaching at Oklahoma and Indiana.

Tennessee forward John Fulkerson’s availability is unclear after he took two elbows to his head from Florida’s Omar Payne in the Southeastern Conference Tournament, causing a concussion and facial fracture.

Tennessee coach Rick Barnes has said Fulkerson is day to day as the fourth-seeded Volunteers get ready to meet No. 13 seed Oregon State.