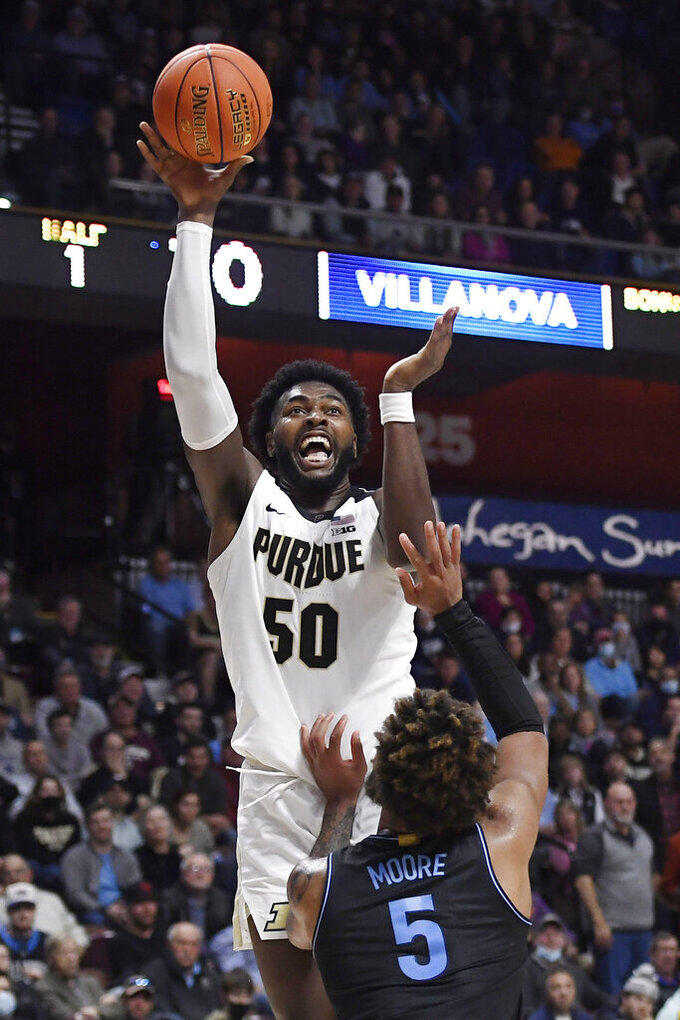 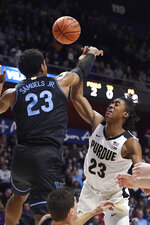 Zach Edey scored 21 points and No. 6 Purdue overcame an 11-point second-half deficit to beat No. 5 Villanova 80-74 on Sunday and win the Hall of Fame Tip-Off Tournament.

The 7-foot-4 center hit nine of his 12 shots from the floor and grabbed six rebounds. The team's other post, 6-10 Trevion Williams, added nine points and four boards for the Boilermakers (5-0), who dominated underneath, outscoring the Wildcats 38-18 in the paint and outrebounding them 38-26.

“Trevion and Zach is a really good 1-2 punch and I thought offensively they had an above average game," coach Matt Painter said. "Between them they had 30 and 10, and I thought Trevion’s defense when we switched five ways he got down in a stance and was the difference. It doesn’t show up in this box score, but it shows up with our staff.”

Caleb Furst and Isaiah Thompson each had 12 points for Purdue.

Justin Moore had 19 points, Caleb Daniels added 17 and Collin Gillespie had 14 for Villanova (3-2), which launched 34 attempts from behind the arc, making 13 of them.

The Wildcats led 33-31 at halftime, scored the first five points in the second half and were up 57-46 after a 3-pointer by Daniels.

But Purdue outscored the Wildcats 34-17 over the last nine minutes.

“This season obviously we’ve never been down before, it was something different,” Thompson said. "I think we were resilient in the second half. I think we got off to a good start and just maintained our focus. Just go on a run, keep getting aggressive and keep fighting. I think we did that late in the game and it led us to a win.”

A dunk by Edey after an apparent missed travel call on Sasha Stefanovic tied the score at 62, and a fast-break layup from Furst gave the Boilermakers the lead at 64-62 with four minutes left, their first time ahead in the second half.

A slam and free throw by Edey with just under a minute to play extended the lead to 75-65, and the Boilermakers held on.

At one point the Boilermakers made 11 straight shots.

“They just played a really intelligent game for 40 minutes," Villanova coach Jay Wright said. "They made less mistakes and executed what they do more consistently for 40 minutes. That’s why they are a really good team.”

Purdue: The Boilermakers shot 52.7% after putting up a season-best 55.7% in the first round of the tournament against North Carolina. Purdue has shot at least 50% in every game this season. ... This was the first time this season Purdue has failed to reach 90 points.

Villanova: This was the third time in five games the Wildcats have played a Top 25 team. “I hope it helps us in our league play when we get there," Wright said. "Number one, our league is really good. Number two, a lot of times we start conference play and we’re not really sure what we are yet. We have an idea, I think this year, playing these teams, these coaches."

Purdue played 10 men, each of them getting at least eight minutes. Wright, who had six players go at least 20 minutes, conceded that fatigue down the stretch might have been a factor in the loss.

The game marked the return of Purdue sophomore Mason Gillis, who was suspended for the first four games because of a drunken driving arrest, for which he pleaded guilty and was sentenced to a year of probation. He did not score and had one rebound in 10 minutes.

Purdue: The Boilermakers head home to host Omaha on Friday.

Villanova: The Wildcats are off until Nov. 28 when they play local rival La Salle at Philadelphia's Palestra.