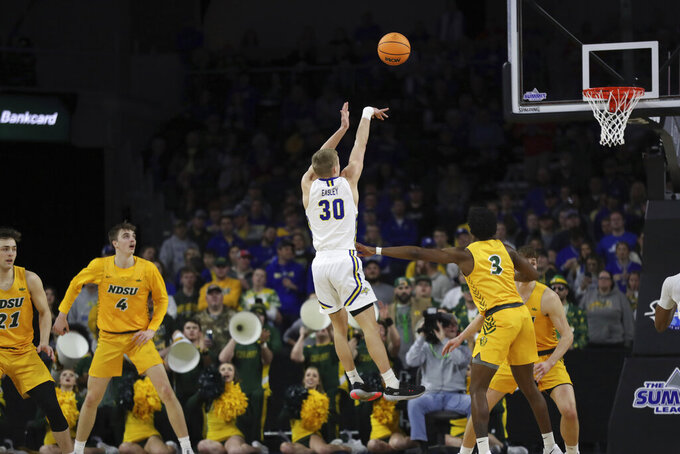 South Dakota State (30-4) added to the program's single-season record for wins. The Jackrabbits, who became the first team in Summit League history to go undefeated in conference play, have won 21 game in a row — the longest active streak in Division I.

North Dakota State (23-9) trailed by as many as 10 points in the first half and didn't take its first lead until Sam Griesel hit a 3-pointer with 3:05 left to put the Bison up 61-60. Charlie Easley answered with a jumper for the Jackrabbits 16 seconds later, Baylor Scheierman followed with 3 to make it 65-61 with 1:54 left and SDSU made 8 of 10 from the free-throw line the rest of the way to seal it.

Griesel made 10 of 16 from the field and finished with 24 points, eight rebounds and five assists for the Bison. Jarius Cook scored 13 points and Grant Nelson 11.

Either the Jackrabbits or North Dakota State has played in each of the last 11 Summit League title games. SDSU has won six championships, including finals wins over the Bison in 2013, 2016 and 2022. NDSU beat South Dakota State for the 2015 crown, one of its four in that span.