Stanford has voids to fill, plans to do so with versatility 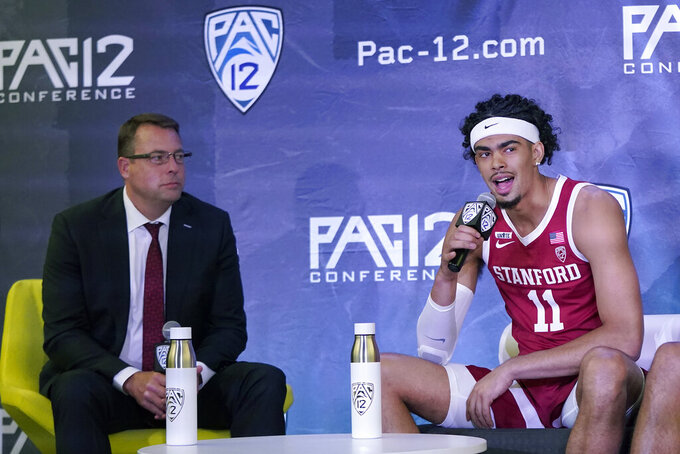 STANFORD, Calif. (AP) — Jerod Haase makes it clear his Stanford team won't be a one-man show. Versatility is the theme and everybody involved realizes it will take contributions from the entire roster to fill some big voids.

This group has learned it can take on any challenge, growing to rely on each other while spending about two months playing and practicing off campus last winter because of Santa Clara County's pandemic-related health restrictions that banned sporting events and practices.

“It's going to sound corny and that kind of thing, and that's OK, our goal is simple, it’s to be awesome,” Haase said. “It's to be awesome in the moment, to be awesome with what we're doing, and I do think we have a chance to be really good and do some neat things.”

The Cardinal will move forward after losing forward Ziaire Williams, who departed Stanford after his freshman season and is now playing for the Grizzlies in the NBA.

The 6-foot-8 Williams, who was the program’s highest-ranked recruit ever, averaged 10.7 points, 4.6 rebounds and 2.2 assists last season.

The Cardinal finished 14-13, 10-10 in Pac-12 play but a triple-overtime loss at Washington State on Feb. 20 began a five-game losing streak to end the season.

“Tournament’s always a goal and we've been this close the last two years,” junior forward Spencer Jones said. “So it's definitely another goal this year that we can very much achieve. Also just being top in the conference, like top five, just showing everybody that now that the Pac-12's on the national stage we belong there as well.”

There is a balance to the basketball and academics, and Haase takes pride in making sure his players feel supported on and off the floor with all they do.

They felt isolated last season being off campus and playing without fans. The Cardinal played some home games in the coastal town of Santa Cruz.

“It also fostered an ability to come together more as a team and just build up that chemistry,” Jones said. “Because of that our chemistry's at an all-time high.”

Stanford shot 46.4% from the floor while holding opponents to just 41.6% — and keeping the defensive pressure on is the plan again going into a season during which the Pac-12 will be talented from the top down.

“If you play under Jerod Haase defense is always going to be a main priority,” Jones said. “And it has been for my last two years. It all starts with defense for us. Defense makes our offense easier, puts less pressure on it and it allows us to get in transition.”

Jones' touch from long range will be another key for Stanford. He shot 37.1% from deep, including 40.7% during the conference schedule and has gained experience.

Now, he expects more out of himself on both ends as a leader and upperclassman. He averaged 12.5 points last season, second only to departed star Oscar da Silva's team-leading 18.5.

And now all those extra shots during the offseason are something Delaire knows will pay off as he tries to pick up even more of the scoring load.

Delaire also worked in the weight room to build strength he believes will make him better in transition.

“I've worked on a little bit of everything,” he said. “I feel like I've gotten a little bit stronger and more flexible, a little bit faster, a little bit more explosive. On the court I just want to be a leader. I want to bring a voice to practice every day, as well as my shooting, is something I honed in on.”

Haase can't wait to see the performance of freshman Maxime Raynaud given the 7-foot-1 big man's versatility in the paint and from the perimeter — quite a combination for the Frenchman's size.

“I think 7 feet barefoot,” Haase said. “Has come in and really impressed everybody, has a great attitude, really multidimensional, has the ability to shoot from the outside and skilled enough and big enough to score on the inside as well.”