UCLA pulls away to beat Chaminade 74-48 at Maui Invitational 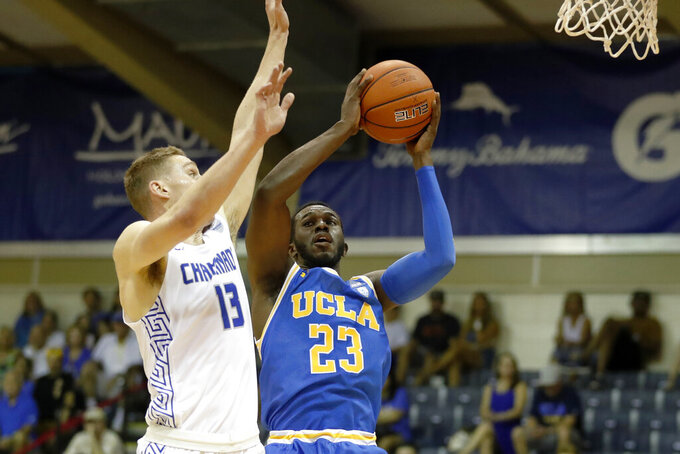 LAHAINA, Hawaii (AP) — UCLA fumbled its way through the first half, giving the Maui Invitational’s upset specialist all they needed: a chance.

Once the Bruins got out of their own way, Chaminade never stood a chance.

Jaime Jaquez Jr. had 17 points and 11 rebounds, Cody Riley added 15 points and UCLA pulled away in the second half to beat the Division II Silverswords 74-48 at the Maui Invitational on Tuesday.

“Once we stopped turning the ball over we were able to score some baskets,” UCLA first-year coach Mick Cronin said. “We still have got a lot of growing to do as a team.”

The Bruins (5-2) overcame a sluggish first half with a dominating second, shooting 55% while outscoring the smaller Silverswords 42-20 in the paint.

Chaminade (2-2) needed to shoot well to have any chance against the bigger Bruins, but couldn’t find the mark. The tournament hosts shot 23% and went 3 for 31 on 3s to end up in the seventh-place game for the six straight time in the Maui Invitational’s main bracket.

“We opened up the game with a high intensity and playing good basketball, but it was an offensive struggle for us tonight, there's no doubt about it,” Chaminade coach Eric Bovaird said. “Knocking down open shots and assist-to-turnover ratio and everything along those lines. But we competed, we tried. I know that.”

The Bruins saw a close game get away from them quickly in their Maui opener against BYU, leading to a 78-63 loss.

The Silverswords had little chance in their return to the championship bracket this year, unable to match No. 4 Kansas’ length and athleticism in a 30-point loss.

Chaminade managed to keep UCLA within reach despite shooting 6 of 31 and scoring 16 points in the first half. That’s because the Bruins missed all six of their 3-point attempts and only scored 22 first-half points and had 12 turnovers.

“Sometimes you’ve got to laugh or you'll cry,” Cronin said.

The Silverswords scored the first six points of the second half to tie the game, but UCLA went on a 12-2 run to go up 34-24. The Bruins kept pushing and Chaminade started missing shots again as the lead grew to 16 midway through the second half.

“I feel like we start off the games on a high, high intensity of defense and then just when things get tough, other teams are scoring, they get a couple like breakouts that's when we get a little stagnant on offense and it feeds in our defense,” Chaminade’s Kendall Small said. “We can't let that happen.”

UCLA needed a half to find a better offensive flow, and now has a chance to leave Maui with two wins after the opening loss to BYU.

Chaminade managed to keep it close despite poor shooting early, but was worn down by UCLA’s size and athleticism.