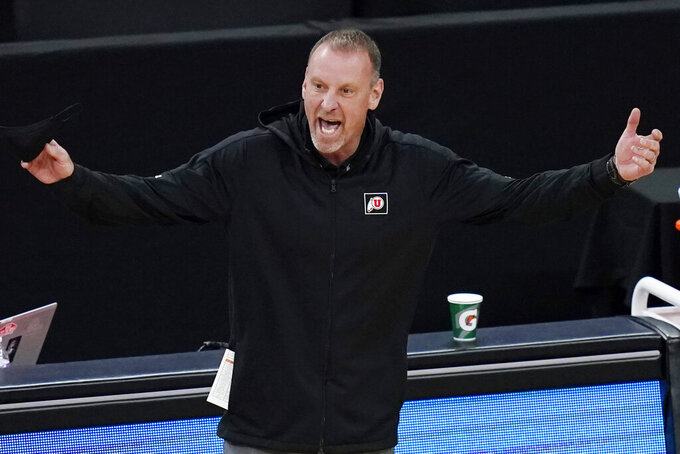 Utah head coach Larry Krystkowiak reacts during the first half of an NCAA college basketball game against Southern California in the quarterfinal round of the Pac-12 men's tournament Thursday, March 11, 2021, in Las Vegas. (AP Photo/John Locher)

SALT LAKE CITY (AP) — The Utah Utes have let go of basketball coach Larry Krystkowiak after 10 seasons and a 183-139 record.

Utah director of athletics Mark Harlan announced the decision Tuesday, saying in a release that “ultimately, our program needs a new voice, a new vision and a new leader who can build upon Larry’s foundation and lead us to greater heights in the years ahead.”

Harlan said Utah will start searching for a new coach immediately. The Utes finished 12-13 this season.

Krystkowiak took over the program in 2011 and led Utah to two NCAA Tournament appearances. The Utes won 27 games in 2015-16 with a squad that included Jakob Poeltl and Kyle Kuzma.

“Larry has always been dedicated to our student-athletes, to our university and to the Salt Lake City community, and I am grateful for his decade of service to the University of Utah,” Harlan said.

Before Utah, Krystkowiak spent two seasons as the coach at Montana, where he went 42-20 and led the Grizzlies to the NCAA Tournament both seasons.

A standout player at Montana, Krystkowiak was taken in the second round of the 1986 NBA draft by Chicago. He played in the league for nine years with San Antonio, Milwaukee, Utah, Orlando, Chicago and the Los Angeles Lakers.