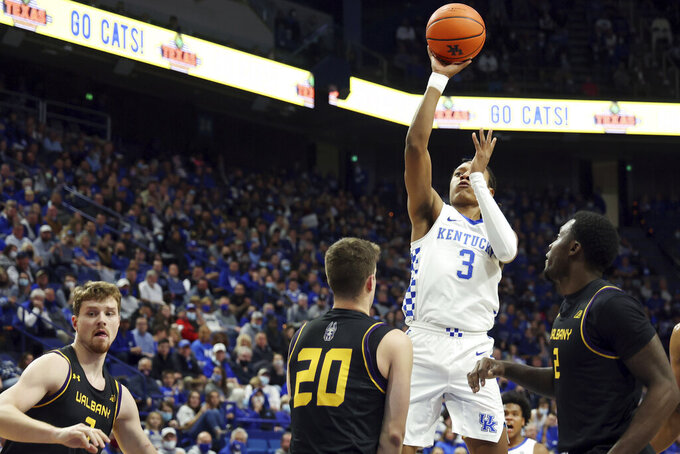 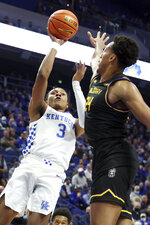 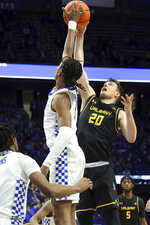 LEXINGTON, Ky. (AP) — TyTy Washington Jr. is making the most of his increased playing time.

The Wildcats (4-1) led throughout but played at a slower pace than usual in building a 46-35 advantage early in the second half. A few spurts, including an 8-0 run to make it 61-39 with 8:28 remaining, put the game out of reach.

“Well, the biggest thing is you make a couple of shots,” Kentucky coach John Calipari said.

Washington, a freshman guard, went 7 of 14 from the field and 2 of 3 on 3-pointers in a career-high 38 minutes. Sahvir Wheeler had 15 points and seven assists in 39 minutes, Kellan Grady made three 3s for 14 points and Oscar Tshiebwe had 14 rebounds and 12 points.

With the Wildcats missing guard Davion Mintz because of illness and Jacob Toppin and Lance Ware because of injuries, their remaining rotation players had to log heavy minutes.

“Our depth is kind of short right now," Washington said, "so it’s our priority to make sure we’re in tip-top shape because at any given day, any given time of the game coach Cal can call your number.

"As long as you’re ready and warm, you’re going to be good.”

“They were playing harder than us and ahead of the action versus us coming at them,” Calipari said. "That aggravated me more than anything.”

De’Vondre Perry scored 18 points and Trey Hutcheson had 12 for the Great Danes (0-5), who shot 34% and made 6 of 13 from the foul line. Albany committed just 10 turnovers while scoring 13 points off Kentucky miscues.

There just weren't enough of those moments for the Great Danes.

“I think the second half it was just their runs," coach Dwayne Killings said. "The reason why Kentucky is Kentucky is their guys on the floor, they just drill shots. They step up and make plays.”

Kentucky had three first-half assists on 16 baskets, all by Sahvir Wheeler. ... Tshiebwe made all six attempts from the floor. ... The Wildcats had eight blocks, three by Daimion Collins and two each by Washington and Brooks. ... Albany had nine steals, three times as many as Kentucky. Perry and Jamel Horton had three each.

Albany: The Great Danes’ physicality helped slow down Kentucky and allow them to stay within single digits for about 25 minutes. But they were no match once the Wildcats became more aggressive and picked up the pace. Getting to the line was a struggle, to say nothing of their problems making them.

“Just the speed that they had once their rebounder took the ball and they got it down the floor,” Hutcheson said. “I think that’s just something that was a little more advanced than what we’ve seen.”

Kentucky: The Wildcats cooled off a bit from 59% shooting in the first half but still were fairly consistent. Turnovers remain an issue as they committed at least 15 for the second consecutive game.