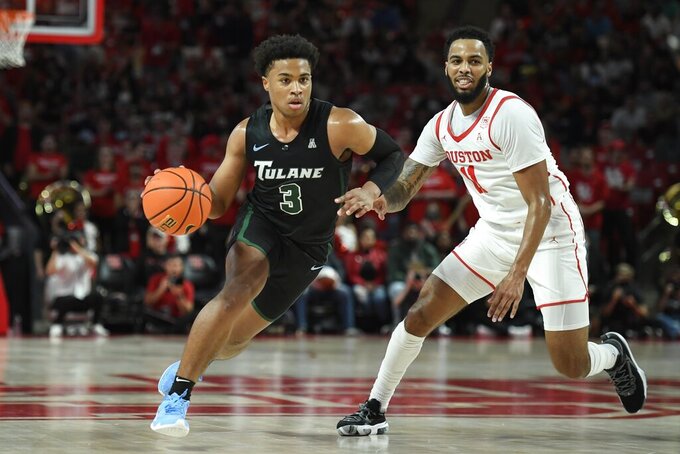 Tulane guard Jalen Cook (3) drives to the basket against Houston guard Kyler Edwards (11) during the first half of an NCAA college basketball game Wednesday, Feb. 2, 2022, in Houston. (AP Photo/Justin Rex) 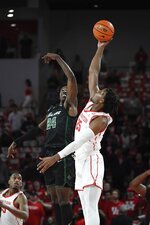 HOUSTON (AP) — Fabian White Jr. scored 16 of his career high-tying 21 points in the first half and No. 6 Houston beat Tulane 73-62 on Wednesday night for its 11th straight victory.

White, a fifth-year graduate senior, also surpassed 1,000 points in his career at Houston (19-2, 8-0 American) and finished with eight rebounds.

“I’m celebrating the win more than 1,000 points,” White said. “Thank you to all my teammates getting me open and getting me good shots.”

“Kyler (Edwards) played 40 minutes; Taze played 38 (minutes), but that’s not going to change,” Houston coach Kelvin Sampson said. “We don’t have any depth. That’s why what we’re doing is not a beauty contest. It’s a great win. Period. Did we shoot well? No. But, this time next time week when you look at our record, it’s going to count as W, and that’s all I care about right now.”

Houston shot 46% but made 8 of 31 on 3-pointers. The Cougars won their 37th straight home game — the second longest streak in the nation behind Gonzaga.

“Our offense was really good,” Sampson said. “The ball moved. I put my foot down in the first half. We were taking too many one-pass, no-pass 3’s. That’s not who we are. We’re not a good shooting team.”

Tulane coach Ron Hunter said before the season he told his team that Houston was the “benchmark” for the conference.

“What happened in the past is I haven’t felt like we’ve been able to compete with Houston,” Hunter said. “Our kids know that we can compete now, and they’re devastated because they wanted to come and win this game.”

“We missed some wide-open jump shots,” Hunter said. “Our two best players really struggled from the field with Cook and Forbes. … If we just make a couple of those shots, and some of them were where Forbes was wide-open. We just couldn’t knock those shots down.”

Leading 22-21 midway through the first half, Houston ended the half outscoring the Green Wave 19-9 to go into halftime ahead 41-30. White had eight points in the run.

Tulane closed to 53-48 midway through the second half on two free throws by Forbes, but Houston responded with an 8-0 run to open a 13-point lead.

Tulane: The Green Wave hung with Houston and were able to get to the free throw line where they made 20 of 23. … The Green Wave’s last win over a ranked opponent was against NC State on Dec. 22, 1999.

Houston: The Cougars have won seven straight games over Tulane. … The Cougars played most of the second half without starting point guard Jamal Shead, who was in foul trouble, but despite that, the Cougars finished with 21 assists.

SCRUM AT THE HALF

As the first half ended, Houston and Tulane players had to be separated and ushered to their locker rooms. Reggie Chaney was one of several Cougars who were held back by coaches and officials as they were jawing with Forbes and several Green Wave players. No punches were thrown, but White and Cross were assessed technical fouls for the fracas.

“Both teams were probably talking a bit too much,” Sampson said. “Since I coach my team, I told them to play basketball. Nothing more than that.”

Houston: Travels to Cincinnati on Sunday.