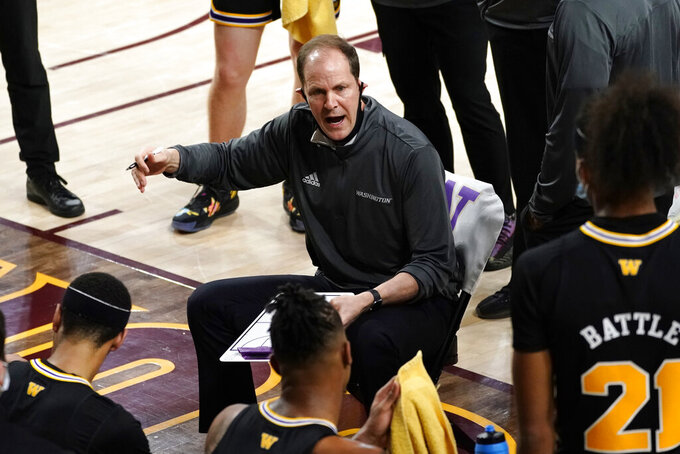 Washington coach Mike Hopkins talks to the team during the first half of an NCAA college basketball game against Arizona State, Tuesday, Feb. 23, 2021, in Tempe, Ariz. (AP Photo/Rick Scuteri)

SEATTLE (AP) — With the benefit of hindsight, Washington coach Mike Hopkins has come to have some regret about a decision he made in November.

Hopkins believed the Huskies had improved from the team that finished last in the Pac-12 during the 2019-20 season. When Washington’s season-opening games against Portland State, San Diego and Cal State Fullerton in November were canceled due to COVID-19 issues with the opponents, Hopkins scrambled and landed a marquee game against Baylor in Las Vegas to kick things off.

That 34-point loss to the Bears seemed to set the tone for the entire season.

“Usually in the preseason you have a normal training camp and then you have some exhibition games to kind of see where you’re at. Our exhibition game was against Baylor,” Hopkins said. “You never know what that’s going to do and that was a bad calculation on my part.”

Washington (5-20, 4-16 Pac-12) will go back to Las Vegas this week for the Pac-12 tournament. The Huskies finished 11th in the conference standings but are the No. 10 seed for the tournament and will face No. 7 seed Utah in the opening round Wednesday.

Two years ago, Washington showed up in Las Vegas as the Pac-12 regular-season champs, the No. 1 seed in the tournament for just the third time in school history and on its way to breaking a eight-year drought without playing in the NCAAs.

But the following two seasons have been nothing but misery on Montlake, leading to questions about whether Hopkins — a two-time Pac-12 coach of the year in his four seasons in Seattle — is the right coach long term.

The issue for Hopkins is the down season comes on the heels of a bad finish a year earlier. Despite having two first-round NBA draft picks, the Huskies lost 13 of their final 17 games and finished last in the conference with a 5-13 record. They were the first team, dating to the creation of the Pac-8 in 1968-69, to win the regular-season conference title one season and finish last the following year.

The hope for a rebound from last season’s struggles never materialized and the result is one of the worst two-year stretches of conference play in school history.

“We needed to be better, I thought we wouldn’t be better than we were,” Hopkins said. “I thought losing the games at the beginning and building confidence I think was a huge thing.”

There are may reasons for the two-year slump. Last season unraveled when point guard Quade Green became academically ineligible for the latter half of the season, and even the presence of future NBA picks Isaiah Stewart and Jaden McDaniels couldn’t stop the downward spiral.

Jamal Bey said it felt as though his team was going through the motions earlier in the season, trying to blend a new group of players and playing in empty gyms.

“That’s what it felt like, especially for myself being out there, no fans getting us hyped, just felt like some games we played just to play,” Bey said. “But now I think we’re playing for each other, playing to win for each other.”

It seems unlikely Washington will make a deep run in the Pac-12 tournament, which will only raise the pressure on Hopkins for next season. The Huskies should return most of their lineup and will likely have fans back in their home building. But another down season will only intensify the calls for a change.

“All you can do is learn from these experiences, last year, this year, and sometimes you have to go through that to reach your potential,” Hopkins said. “That’s the way I’m looking at it. That’s the way we’re looking at the program. We’ll move forward from it, get better from it, grow from it and hopefully be back on top quick.”