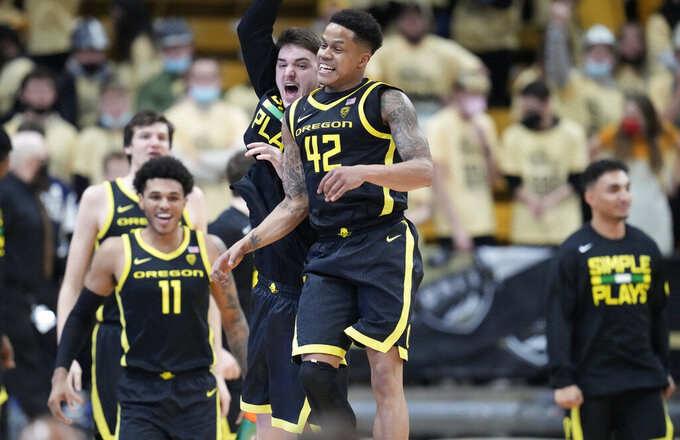 BOULDER, Colo. (AP) — Jacob Young tossed in 21 points and Oregon beat Colorado on the road for the first time, 66-51, on Thursday night.

Young knocked down 8 of 17 shots from the floor with two 3-pointers for the Ducks (14-7, 7-3 Pac-12 Conference), who came in 0-10 all-time on the Buffaloes' home floor. Will Richardson added 13 points and Quincy Guerrier scored nine with nine rebounds.

Oregon's De'vion Harmon sank a 3-pointer to open the second-half scoring and it was all Ducks from there. Guerrier and Richardson had back-to-back buckets as Oregon pulled away from a 40-all tie, outscoring Colorado 26-11 over the final 17:14.

Keeshawn Barthelemy topped the Buffaloes with 16 points. Jabari Walker finished with 11 points and 12 rebounds for his Pac-12 leading 10th double-double of the season. Evan Battey scored 10. Colorado has lost five of its last six games.