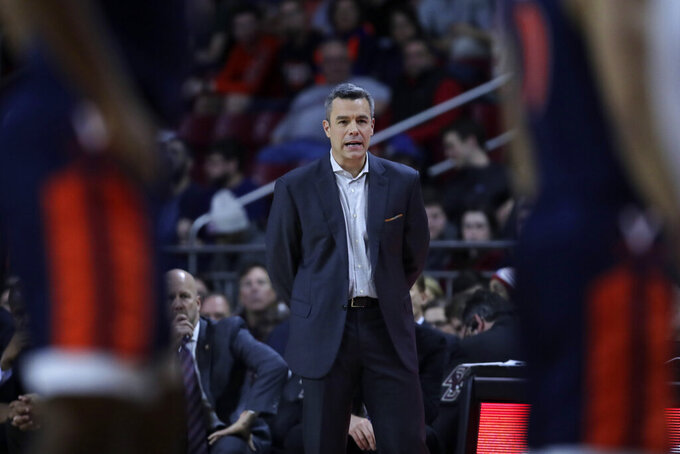 Virginia coach Tony Bennett knows what the problems were in Tuesday night's loss to Boston College. Now he's got to fix them.

“I think the tape's going to reveal some things that are going to hurt and sting,” Bennett said after unranked BC beat the 18th-ranked Cavaliers 60-53. “But you move on and get ready for the next one.”

Jared Hamilton hit a tiebreaking 3-pointer with 37 seconds left and added a pair of free throws to clinch it as the Eagles sent the defending national champions to their first Atlantic Coast Conference loss of the season.

Jay Heath scored 17 for BC (9-6, 3-1), which had not beaten Virginia in six tries since 2013. It was BC's first win over a ranked team since beating No. 11 Florida State last January, and Virginia's first loss to an unranked ACC opponent in almost two years.

“We're trying to do the same thing as everyone else,” BC coach Jim Christian said, whose team was a 10 1/2-point underdog coming off a 39-point loss to Duke. “These guys are not surprised they won this game.”

Braxton Key scored 16 points with eight rebounds for the Cavaliers (11-3, 3-1). The 2019 champs, who a year earlier were the first team to lose as a No. 1 seed in the NCAA tournament, have now lost two of their last four games.

BC scored eight of the first 10 points in the game and still led 42-30 with 14 minutes left before Virginia scored 10 in a row. With about seven minutes left, Key missed a layup and Mamadi Diakite slapped the rebound out to the top of the key, where Kihei Clark hit a 3-pointer to tie it at 45-all.

Diakite followed with a three-point play to give Virginia its first lead since the opening basket of the game. Clark scored seven points during the 20-3 run, while BC was held to just one basket over almost nine minutes.

BC took a 53-51 lead with just over two minutes left, but Key scored from underneath to tie it. Hamilton scored from in front of the Eagles bench to put them ahead, then leaned back into the embrace of his teammates to celebrate.

“Feeling the support of the guys,” Hamilton said. “That was a great feeling.”

Boston College was without starting point guard Derryck Thornton, who injured his ankle, and Nic Popovic, who has been out a month with a sore back. Forward Steffon Mitchell, who was nauseated and had migraine headaches, needed two IVs to get ready for the game.

Christian said he didn't know if Mitchell would be available until about five minutes before the tipoff. He played almost 30 minutes and scored 10 points with eight rebounds.

“There's a beauty to it,” Christian said. “It's effort, it's character, it's determination.”

The Cavaliers committed four fouls in the first 67 seconds, and Diakite went to the bench with two. The biggest man in Virginia's starting lineup — and the only one listed as a forward, along with four guards — played just 4:36 in the first half, with two points and two rebounds.

After making its first shot, Virginia missed the next seven, and it was still just 8-2 with almost six minutes gone.

“I thought we were kind of lethargic in the beginning of the game,” Clark said. “And once you dig yourself that big of a hole ... it's hard to get back in it.”

Virginia: After climbing as high as No. 5 in the AP Top 25, the Cavaliers have now lost to South Carolina and Boston College in the last two weeks. They have lost as many games as they did all of last season.

Boston College: The Eagles were able to quickly forget about their 88-49 loss to Duke on Dec. 31.

“We had a week to get ready for this game, so we had the benefit of time to get it out of our system,” Christian said. “When you're playing great teams in this league, if you dwell too much on one game, you're going to struggle.”