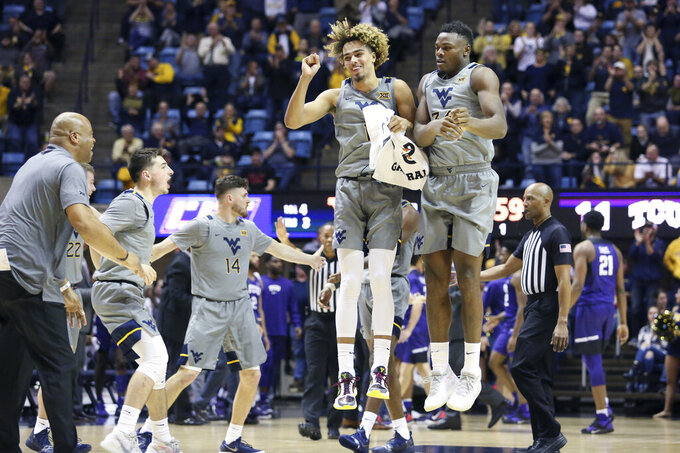 West Virginia forwards Emmitt Matthews Jr. (11) and Oscar Tshiebwe (34) celebrate after a score during the first half of the team's NCAA college basketball game against TCU on Tuesday, Jan. 14, 2020, in Morgantown, W.Va. (AP Photo/Kathleen Batten) 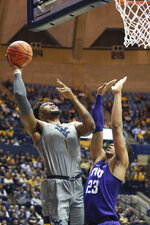 No. 12 West Virginia got a huge lift from its reserves on the offensive end and the Mountaineers stomped TCU 81-49 on Tuesday night.

“Honestly, that's why we recruited them,” said West Virginia coach Bob Huggins. “They're starting to understand what's asked of them, and consequently they're playing better.”

West Virginia (14-2, 3-1 Big 12) is unbeaten in eight home games and has held 10 opponents this season to 60 points or less, including five straight.

It was the bench production that stood out Tuesday.

On Saturday, McBride, a freshman backup guard, had a season-high 22 points in a 66-54 win over Texas Tech.

“A lot of teams don’t have as many players as we do that play as hard as we do," Culver said. "We just have more bodies and more legs and more stamina.”

The Mountaineers' backup guards broke open a close game midway through the first half and turned the momentum in their favor for good. Brandon Knapper and Chase Harler hit back-to-back 3-pointers not long after checking into the game to start a 14-0 run. Harler had seven points during the burst. Backup guard Sean McNeil’s 3-pointer just before halftime put the Mountaineers ahead 37-23.

“Chase has been terrific,” Huggins said. “He's been, in a lot of cases, our best defender on the floor. He's made shots. He's constantly telling other guys where to go and what to do. He's been fantastic.”

TCU, the Big 12’s best 3-point shooting team with 9.8 made per game, went to its outside game to try to catch up. The Horned Frogs hit four 3-pointers in the first four minutes of the second half to cut the deficit to 44-36.

But TCU couldn’t stop the inside tandem of Tshiebwe and Culver, who made the paint their personal playground after halftime. Tshiebwe scored seven unanswered points and Culver followed with four straight of his own midway through the second half.

Culver, the Big 12's leading rebounder had his fourth double-double of the season and his first in six games.

TCU (12-4, 3-1) remains winless in Morgantown since joining the Big 12 in the 2012-13 season. The Horned Frogs missed a chance to take over sole possession of first place in the league and had their four-game winning streak snapped.

“We looked like we didn’t prepare at all," said TCU coach Jamie Dixon. "As it went on, we just withered. Our bench got depleted as we got guys in foul trouble. Everything we said we wanted to do, we didn’t do.”

TCU: The Horned Frogs had no answer to a rare offensive burst for West Virginia. TCU committed 20 turnovers and was outrebounded 38-24.

“That was the one thing I did get right for today, that if we get outrebounded, we’ll lose, and we did,” Dixon said.

West Virginia: The Mountaineers have been getting attention for their defense of late, but they shot a season-high 57.7% from the floor. Culver went 6 of 7, McBride went 5 of 7, and Tshiebwe and Haley both went 4 of 6. It was the first time in a month that West Virginia surpassed 80 points.

TCU plays at Oklahoma on Saturday.