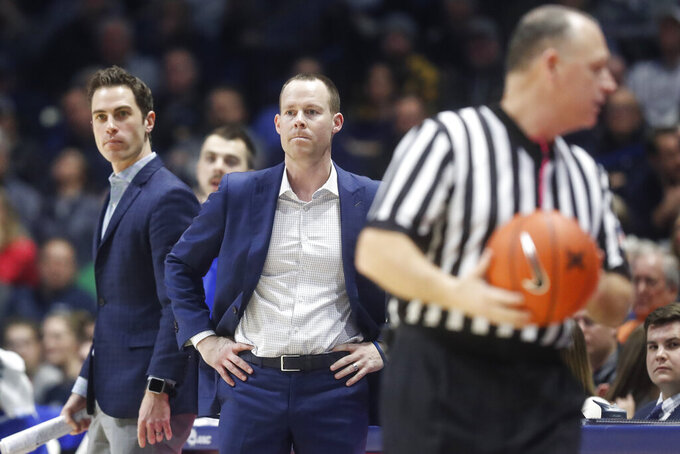 Xavier head coach Travis Steele reacts after receiving a technical foul in the second half of an NCAA college basketball game against Marquette, Saturday, Jan. 26, 2019, in Cincinnati. (AP Photo/John Minchillo) 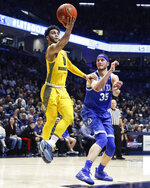 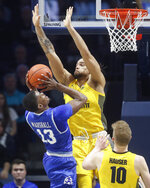 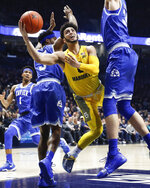 CINCINNATI (AP) — Trailing by 11 points in the second half, No. 12 Marquette turned to its unstoppable guard to pull another one out and keep its streak going.

Markus Howard scored 19 of his 31 points down the stretch Saturday as the Golden Eagles rallied to beat Xavier 87-82 for their seventh consecutive win.

Joey Hauser added 21 points and Sam Hauser had 20 to help Marquette (18-3, 7-1 Big East) overcome Xavier's best offensive showing of the season. Xavier shot 50 percent from the field and had a 34-30 edge in rebounds, but had no answer for the Big East's top scorer .

"We've been used to being in games like that where we take teams' best," said Howard, who was 10 of 22 from the field, including 4 of 9 from beyond the arc. "Our response has been really good in those. If we can take that on the road, I think we're a tough team to beat."

Paul Scruggs scored 21 points for Xavier, and Tyrique Jones matched his career high with 21 points and 11 rebounds . Despite all that, the Musketeers couldn't keep up with Howard and company.

"I felt we played some of our best ball," point guard Quentin Goodin said. "They hit some wild shots. The basketball gods gave them what we call some lucky baskets, but I felt we played good."

The teams set a wide-open pace from the outset, with Xavier hitting 8 of 11 shots and Marquette 7 of 14. Play wasn't stopped for the first timeout until the 10:40 mark with the Musketeers ahead 22-18. They led by as many as seven before Marquette pulled even 39-39 for halftime .

Xavier's Naji Marshall guarded Howard until an injured right shoulder — hurt in the last game — forced him to the bench with 2:21 left in the opening half. He returned for the start of the second half and hit a pair of 3s as Xavier built its 11-point lead.

Marquette: The Golden Eagles' winning streak is their longest in league play since they took seven straight in 2011-12. The No. 12 ranking is their highest since the 2012-13 season.

Xavier: The Musketeers played their best game on offense but continued to struggle in the closing minutes of close games. They fell to 9-4 at the Cintas Center, where they lost one time last season.

Marquette leads the series 51-42, although Xavier has won nine of 14 since the Musketeers joined the Big East in 2013.

Marquette came into the game leading the Big East in field goal defense and 3-point defense. Xavier is last in scoring and 3-point shooting. The Musketeers were able to keep up most of the way.

Marquette leads the Big East and ranks ninth nationally in free throw percentage at 77.2. Against the Musketeers, the Golden Eagles hit 10 of 11 free throws after they took the lead.

On Friday night, Marquette's 10th-ranked women won 90-44 on the same court , beating Xavier for their eighth straight victory. The women's team has its highest ranking in school history.

Wojciechowski got emotional while talking about Matt Heldt, the lone four-year scholarship senior on the roster who was reduced to a backup role this season. Heldt wound up playing 20 minutes because of foul trouble.

"What Matt Heldt did today was one of the most beautiful things I've seen happen," Wojciechowski said, wiping tears from both eyes when he finished talking about how the center has graciously accepted his reduced role.

Marquette plays at Butler on Wednesday. The Golden Eagles host the Bulldogs on Feb. 20.

Xavier plays at Georgetown on Thursday. The Musketeers overcame a 17-point deficit and beat Georgetown 81-75 on Jan. 9 at the Cintas Center.