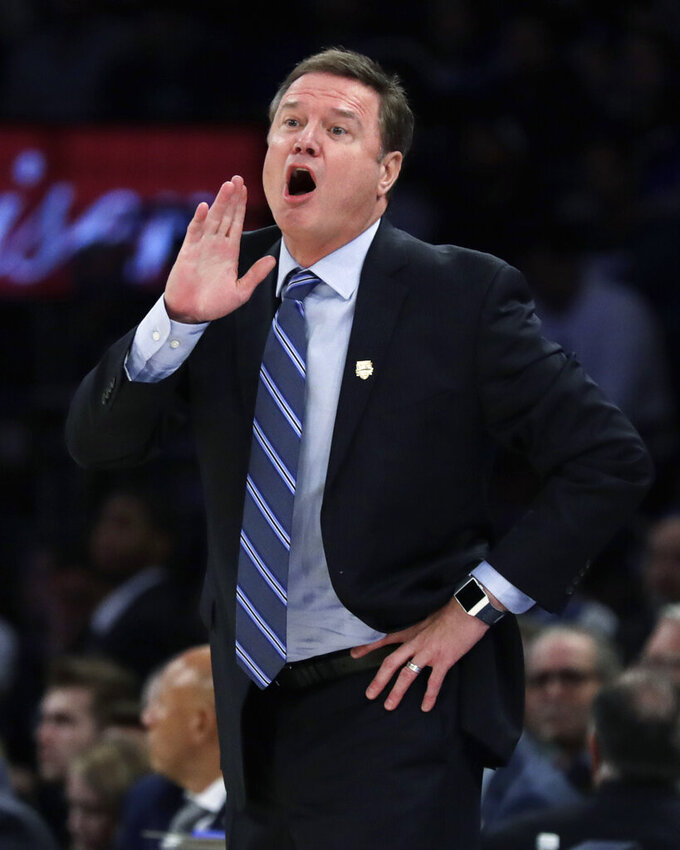 Kansas coach Bill Self shouts to his team during the second half of an NCAA college basketball game against Duke on Tuesday, Nov. 5, 2019, in New York. (AP Photo/Adam Hunger)

LAWRENCE, Kan. (AP) — Kansas coach Bill Self knew it was important to fill the majority of his upcoming recruiting class during the early signing period, given the uncertainty that surrounds the Jayhawks when it comes to potential NCAA violations.

The school was hit with a series of allegations earlier this year, the majority of them tied to recruiting violations, and Self was singled out for supposedly failing to monitor the program.

Kansas has vowed to fight the NCAA violations, which stemmed from an FBI investigation that centered on apparel provider Adidas. But it’s a process that could take months and potentially years, and neither Self nor anybody within the program knows how it will end up.

“I thought it was more important this year than most because of the unknown that awaits out there. I don’t know if unknown means bad — it could be a positive. You just don’t know when this will be concluded,” Self said Thursday, a day after getting signed letters of intent from a pair of high-profile high school prospects and one of the top junior college players in the country.

“It was important we get some guys early,” Self said, “just to have three good players in the fold that you didn’t have to worry about when it was going to end. To have three guys like this jump on board now is a pretty strong move on their part but, more importantly, it helps us out and certainly changes in my opinion what has been a fairly negative narrative put out about us.”

Self acknowledged the Jayhawks likely missed out on some targets because the specter of NCAA violations hangs over the storied program. In many cases, Self’s pitch had to begin with laying out the facts of the case — from his perspective — and clearing up disinformation. He made no promises about what would happen, though.

“They’ve been reassured that we’re being honest with him. They have not been reassured what the outcome will be, not at all,” Self said. “Playing at Kansas is a pretty good deal for the vast majority of recruits out there. Playing at a place with this tradition, this history, this interest level, this recent success — there’s a lot of things that go into attracting kids here.

“We’re dealing with a situation that we don’t know what the outcome is,” Self continued, “but those other things do not go away. Over time, the Kansas basketball program will prevail.”

The question is: How rocky will the road be getting there?

Nobody expects the case to reach any sort of conclusion this season, when the fifth-ranked Jayhawks harbor hopes of playing for a national title. The case is complicated, the appeals process long and tedious, and it could be several years before results are known.

Bryce Thompson is the prize of the class, a five-star combo guard from Tulsa’s prolific Booker T. Washington High School in Oklahoma. His father, Rod Thompson, was coached by Self a generation ago at Tulsa, giving Kansas an inside track on the consensus Top 25 recruit.

Gethro Muscadin is a raw, 6-foot-10 forward originally from Haiti who spent time at Life Prep Academy in Wichita and Sunrise Christian Academy in Bel Aire, Kansas. The top-150 recruit is spending this season at Spire Academy in Kentucky, where Muscadin is attempting to refine his game. He didn’t start playing basketball until he was 15, but was still courted by big-name programs.

Tyon Foster-Grant probably cares little about what the NCAA will decide with regard to Kansas. He will arrive next season with only two years of eligibility. But the 6-foot-7 wing, who grew up in the Kansas City area before heading to Indiana Hills Community College in Iowa, has emerged as one of the top five junior college prospects in the country and a potential plug-and-play starter.

The trio suggest Kansas can continue to recruit on a national stage, even with so much uncertainty. Still, all the newcomers had ties to Self, the program or the area.

“I do think considering everything that’s happened, it’s a terrific class,” Self said. “All three were our main targets. I don’t think we could have recruited better at the respective positions we were recruiting given our situation.”