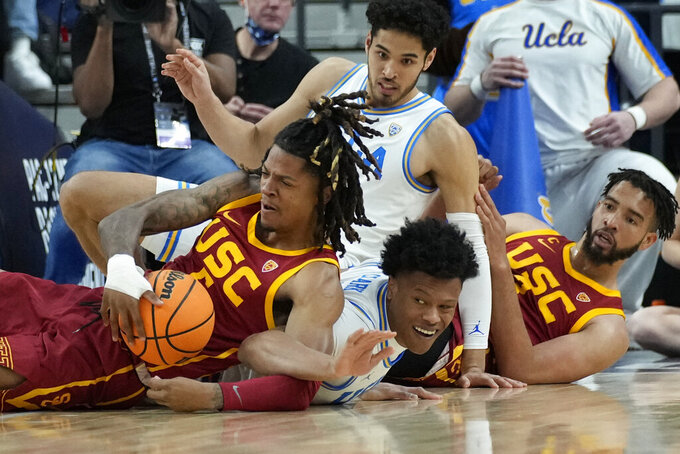 Southern California's Isaiah White, left, and UCLA's Jaylen Clark scramble for the ball during the first half of an NCAA college basketball game in the semifinal round of the Pac-12 tournament Friday, March 11, 2022, in Las Vegas. (AP Photo/John Locher)

LAS VEGAS (AP) — UCLA's defense is coming around at just the right time.

Will it lead to another Final Four run? Hard to tell, but it's starting to have a similar feel.

“When we went on our run last season, we really locked in on the defensive side of the ball,” said UCLA point guard Tyger Campbell, who had 14 points. “Coach preaches defense, defense, defense, so try to lock in again.”

UCLA made an unexpected run to the Final Four a year ago by, in large part, clamping down on defense. The Bruins had some shaky stretches during the regular season, but have locked in on the defensive end while winning eight of their last nine games.

Second-seeded UCLA (25-6) shut down Washington State in the second half of the Pac-12 quarterfinals and kept it going against USC. The Bruins built an eight-point halftime lead and their offense came around in the second to earn a spot in Saturday's title game against No. 2 Arizona.

“There's going to be nights when you're probably going to have to score a lot of points to win,” UCLA coach Mick Cronin said. “But you can control your effort and if you defend, you've always got a chance.”

The Trojans cut down on the turnovers (23) that plagued them in the quarterfinals against Washington, but spent most of the first half in an offensive funk. USC started hitting more shots in the second half, but couldn't make up ground because the Bruins shot even better.

Boogie Ellis tried to keep the third-seeded Trojans (26-7) in it, hitting five 3-pointers and scoring 27 points.

“Unfortunately, we couldn't keep up with the scoring even though it was a low-scoring game,” USC coach Andy Enfield said. “We had our chances, but some of the shots went in and out. It puts a lot of pressure on your defense when you can't score the ball when you need to.”

USC won the teams' first meeting 67-64 despite playing without Mobley due to a concussion. UCLA won the second game 75-68 last Saturday, ending a five-game losing streak to its rival and earning the No. 2 seed in the Pac-12 Tournament.

The Bruins took control of the third go-round with a dominating defensive first half.

Hounding the Trojans inside and getting out to their perimeter shooters, UCLA held USC to 9-of-29 shooting in the first half. The Trojans had a stretch of one field goal in six minutes, but Drew Peterson hit a turnaround jumper at the buzzer to pull them within 36-28 at halftime.

Jaquez had 11 first-half points after scoring 17 of his 23 in the second half against Washington State in the quarterfinals.

USC opened the first half by making five of its first six shots — and still couldn't make up ground.

Jaquez continued to give the Trojans problems with his footwork and crafty moves in the post, scoring and setting up teammates when double teams arrived.

USC managed to trim the lead 42-38 after that, but UCLA stretched it back out and made 12 of 22 in the second half.

“When we cut it to four, they got to the foul line and made some tough shots,” Enfield said. “Those guys are tough shot-makers.”

USC found an offensive rhythm in the second half after struggling in the first, but gave up too many good looks that the Bruins knocked down. The Trojans are headed to the NCAA Tournament, but have lost three of four heading into the bracket.

UCLA showed off its defensive prowess in the first half and its offensive firepower in the second to earn its first trip to the Pac-12 title game since winning it in 2014.

Johnny Juzang's draft stock rose after a scintillating run in last year's NCAA Tournament. The hype may finally be getting to him.

The guard led UCLA with 16.2 points this season, but has struggled getting shots to fall over the past month or so. Juzang has shot 35% the past eight games. He had 10 points on 4-of-11 shooting against USC.

“Pressure's a good thing, you embrace it and try to win, but if you're stressing out about that type stuff and that's in your mind while you're trying to shoot the ball, that's a recipe for disasters,” Cronin said. “I worry about that for him, so I was really happy to see him get some shots to go down.”

USC: Will play in the NCAA Tournament, but will likely have a lower seed after the tough closing stretch to the season.

UCLA: Moves on to face No. 2 Arizona in the title game Saturday night.