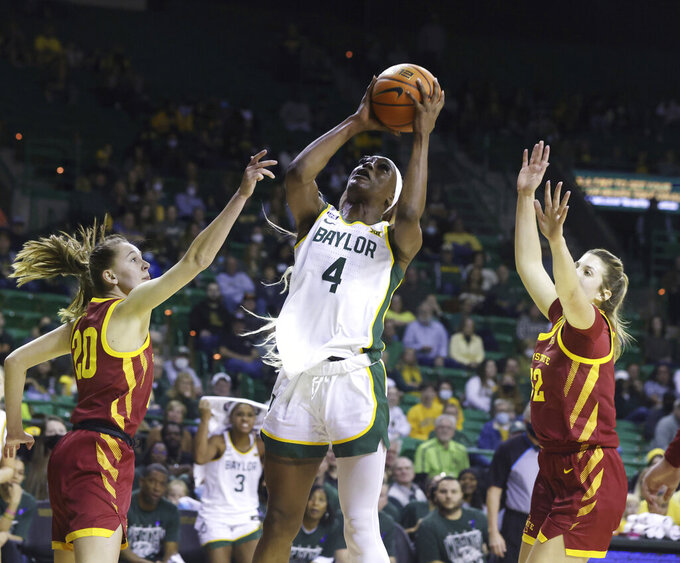 WACO, Texas (AP) — Jordan Lewis scored 24 points with six made 3-pointers and 15th-ranked Baylor had assists on 26 of its 32 made baskets.

There was a lot for new Bears coach Nicki Collen to like about her first victory over a ranked opponent, 87-61 over No. 7 Iowa State on Sunday.

The Bears (13-4, 3-2 Big 12), who made 12-of-21 3-pointers, might look a little different with former WNBA coach Collen at the helm after 21 seasons and three national championships under Kim Mulkey. But they are still winning.

Queen Egbo had 14 points while setting a career high with 20 rebounds, Sarah Andrews added 18 points with four 3-pointers and NaLyssa Smith scored 17 points for the Bears. Smith had the last seven points of their 19-0 run late in the third quarter that began with two 3s each by Lewis and Andrews.

“That was definitely the knockout punch,” said Iowa State coach Bill Fennelly, whose team had won its last two meetings with Baylor.

The Bears are 8-0 at home this season and have won 15 in a row in the Ferrell Center since Iowa State won there a year ago to end Baylor's 61-game home winning streak that dated back to February 2017.

"They hunt the 3 ball a little bit more than in the past,” Fennelly said. “You’re still talented. You’ve still got big guys around the basket. But I think their willingness to shoot the 3 a little quicker changes how you have to prepare for them, and especially if they’re making them like they were today. ”

Ashley Joens, who missed the Texas game because of Big 12 COVID-19 health and safety protocols, returned to the lineup and led Iowa State with 19 points. Joens missed her first five shots before a 3-pointer from the top of the key at the end of the first quarter that put the Cyclones up 13-12. That was their last lead.

Lewis made three 3s and 13 points over the final 6:43 of the second quarter, when Baylor outscored the Cyclones 27-15.

“I actually messaged Coach Nicki earlier in the week, and she just told me to be more confident shooting the ball,” said Lewis, who finished 6 of 7 from long range. “I wasn’t shooting the ball as well and being as confident on the floor. She asked me to kind of just lead the offense and be aggressive. They were leaving me open, so I knew I had to knock down shots today.”

Maggie Espenmiller-McGraw finished with 11 points for Iowa State, and Beatriz Jordao had 10.

Iowa State: With a win, the Cyclones would have taken over sole possession of first place in the Big 12 standings since 14th-ranked Oklahoma lost at Kansas State earlier Sunday. ... Aubrey Joens, the sophomore and younger sister of Ashley who was averaging 9.4 points and 6.9 rebounds a game, also missed the Texas game. Aubrey also returned but played only four minutes and missed her only shot.

Baylor: The Bears outscored Iowa State 27-15 in the second quarter, then duplicated that exactly in the third quarter.

IN THE FRONT ROW

Baylor men's basketball coach Scott Drew sat in the first row of the student section adjacent to the Iowa State bench. Fennelly said he has known the Drew family for a long time, and that Drew's younger sister, Dana, played for him at Toledo.

“He stood up right away and he started telling me to sit down, so I should have probably called some more timeouts like he does at our place,” Fennelly said of Drew. “He’s like the early-timeout guy at our place, and it usually works. The problem is they give you four. I needed about 104 today.”