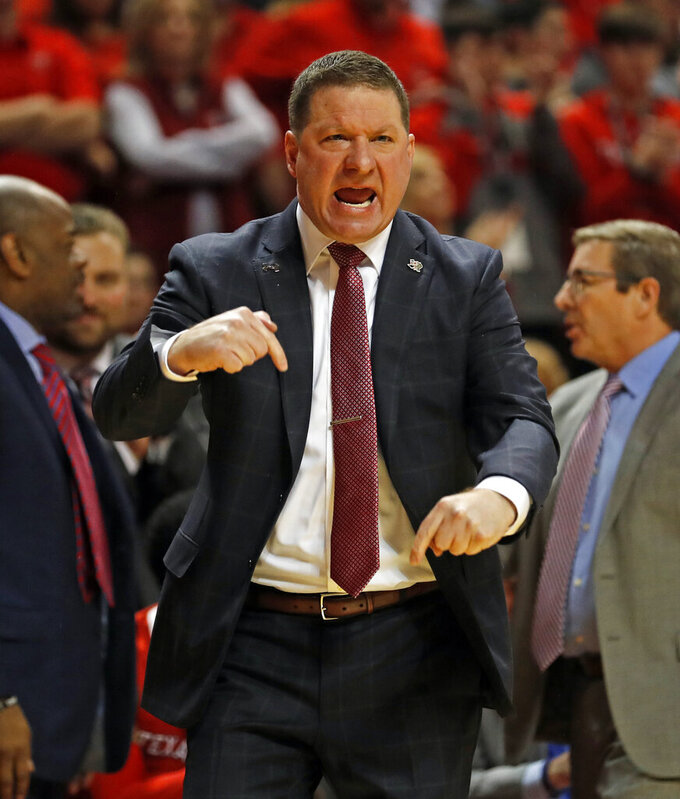 Texas Tech coach Chris Beard reacts to a play during the first half of an NCAA college basketball game against TCU, Monday, Jan. 28, 2019, in Lubbock, Texas. (AP Photo/Brad Tollefson) 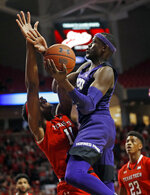 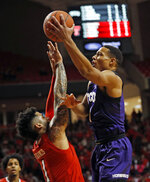 LUBBOCK, Texas (AP) — Jarrett Culver had an emphatic dunk to punctuate a much-needed big Monday performance for No. 16 Texas Tech.

Culver had 12 of his 18 points after halftime, including the thundering slam on a lob pass from Davide Moretti for a 20-point lead late as the Red Raiders snapped a three-game Big 12 losing streak with an 84-65 win over TCU.

"It was a big game for us, first time on ESPN Big Monday in Lubbock since 2006," said Tech coach Chris Beard, then an assistant for Bob Knight. "We embrace that. We didn't act like it wouldn't happen and we embraced it because we want to play more meaningful games like this."

Texas Tech (17-4, 5-3 Big 12) had it their biggest lead after Tariq Owens blocked a shot that was rebounded by Moretti, who worked the ball up the court before passing to Culver to make it 80-60 with 3:16 left. Culver had another dunk after that.

Texas Tech, which made it to the NCAA Elite Eight last season, had lost three Big 12 games in a row before a win over Arkansas in the SEC/Big 12 Challenge on Saturday night. The Red Raiders dropped two spots from 14th in the new AP poll earlier Monday, after being in the Top 10 two weeks ago.

Matt Mooney also had 18 points for the Red Raiders, while Owens had 17. Moretti had 11 points and seven assists.

"I think we had a good game overall as a complete team," Owens said. "Everybody stepped up to the part, that was a big focus from our coaches, you know, everybody taking the time and doing what you need to do, everybody individually and collectively. ... The place was electric, so that always helps us."

Kouat Noi had 16 points for TCU (15-5, 3-4), while Desmond Bane scored all 13 of his points in a short span after halftime. Kendric Davis and Kevin Samuel, both freshmen, had 10 points. Samuel also had 12 rebounds for his fourth double-double.

Texas Tech started the game with Mooney's alley-oop pass to Owens for a dunk. Noi then scored six in a row before Tech's 8-0 run that put them ahead to stay — and was capped when Owens banked in a 3-pointer.

"Certainly disappointed by how we played. But you know, we got what we deserved," TCU coach Jamie Dixon said. "We got outexecuted and they obviously got a good start and made shots, and I think to their credit they made the shots. But I think our defense had something to do with it."

The Red Raiders had a 37-18 lead after Moretti hit consecutive 3s. After TCU cut into the gap a bit, Tech took a 43-27 halftime lead when Moretti had a defensive rebound and Culver then drove nearly the length of the court for a buzzer-beating layup .

TCU: The Horned Frogs have won their last seven Big 12 home games, dating back to last season, but are 0-4 on the road in conference this season. The last two have been double-digit losses. They are 0-3 against Top 25 opponents.

Texas Tech: An encouraging offensive performance for the Red Raiders with four players scoring in double figures while shooting 54 percent (32 of 59) overall — and 43 percent (9 of 21) on 3-pointers. They had 43 points at halftime — just two points less than they had overall a week ago in a 58-45 loss at Kansas State.

"We played one of our better games this season," Beard said.

Bane scored all 13 of his points in the first eight minutes of the second half, including three 3-pointers in a span of 2 1/2 minutes. When he scored his last points on a layup with 12:09 left, the Frogs still trailed by 14. The last field goal made by Noi, the reigning Big 12 player of the week, came on a layup for TCU's first basket after halftime.

TCU's Alex Robinson had only one assist. He entered the game leading the Big 12 and third nationally with 7.7 assists per game. The Horned Frogs had a season-low nine assists as a team. They led the league with 17.6 a game.

Texas Tech is on the road for three of its first four games, starting Saturday at No. 11 Kansas.