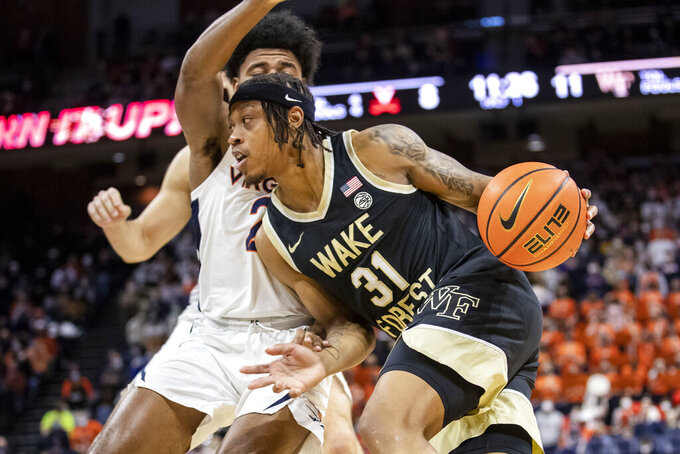 There are a lot of old newcomers making a splash this season in college basketball.

ACC top scorer Alondes Williams for Wake Forest and Pac-12 leader Terrell Brown Jr. at Washington are both senior transfers who joined their new teams this season. The same goes for the leading scorers for four of the 10 teams in the Big 12.

With the extra season of eligibility available to everyone because of the pandemic and players being able to go into the transfer portal and play right away elsewhere, there were a lot of changes on rosters across the country. About 1,700 players went into the portal last offseason.

“I think every coach kind of deals with that nowadays with people stepping in, playing right away and being new to campus,” Baylor coach Scott Drew said.

The leading scorers in the SEC and Big East are also seniors, but in their second season on the court since changing schools. JD Notae transferred to Arkansas from Jacksonville, and had to sit out the 2019-20 season before the altered transfer rules. Javon Freeman-Liberty went to DePaul after two seasons at Valparaiso.

Mitchell and Teague had been transfers who had to redshirt for a season before debuting with the Bears during the 2019-20 season, when they set a Big 12 record with 23 consecutive wins before the NCAA Tournament was canceled because of the pandemic. Akinjo is the Big 12 assists leader and was Baylor's top scorer before falling hard on his tailbone at the end of game Jan. 11 and missing two of the last four games.

“Davion and MaCio, those guys got to be on scout team for a whole year, learn the other team’s offenses and defenses, see them up close and in person. And then build relationships with the team," Drew said. "Everybody now, it’s kind of like trying to get married in the first month. Normally, you date a couple years.”

Brown was an in-conference transfer going to Washington after one season at Arizona, where he had gone as a graduate transfer from Seattle University. He started only nine games and averaged 7.3 points for the Wildcats, but now leads the Pac-12 at 20.9 points a game.

Before going to Wake Forest, Williams played two junior college seasons and spent two seasons at Oklahoma, where his highest-scoring game was 15 points against Gonzaga in last year's NCAA Tournament. The 6-foot-5 guard has scored 20 points in 11 games this season, and is the only player in the country averaging at least 20 points, five rebounds and five assists a game.

Williams leads the ACC in scoring (20.4 per game) and assists (5.1). No player has led that league in both of those categories in the same season since it started tracking assists a half-century ago. No first-year transfer has ever led the ACC in scoring.

Notae averaged 13 points a game while starting only one game at Arkansas last season for an Elite Eight team. He now scores 19 points for a team that has won five SEC games in a row and has four other seniors: three graduate transfers and starting guard Au'Diese Toney, who started for Pittsburgh the past three seasons.

Oscar Tshiebwe, a 6-foot-9 junior post for No. 12 Kentucky after being a two-year starter at West Virginia, is fifth in the SEC at 16.3 points a game and leads the nation with 15.3 rebounds a game.

Izaiah Brockington, who leads No. 23 Iowa State and ranks third in the Big 12 at 16.9 points a game, started his college career at St. Bonaventure, then had to sit out a year after transferring to Penn State, where he played two seasons before going to Ames.

Bryson Williams, the leading scorer for Texas Tech at 13.7 points, had 33 points in a double-overtime loss at Kansas earlier this week. After two seasons each at Fresno State and UTEP, he is one of four senior transfers playing key roles in their first season for the No. 13 Red Raiders.

Only one of the eight Division I transfers added by TCU is listed as a senior, but at least two of them are sophomores that the Horned Frogs had heavily recruited out of high school. TCU's 13 wins are already one more than last season.

“The joke is now is you want to come in second when you’re recruiting. ... so when they transfer," TCU coach Jamie Dixon said.

Recruiting had surely changed, with as much or more focus now put on transfer players than those in high school, which often means getting more experienced and older players.

“I think college basketball at our level, our league and the Power 5s is, going to be better because you’re not going be playing young guys,” Dixon said. “I have embraced it. I'm all for it.”