Tennessee knows it must improve defense to stay at No. 1 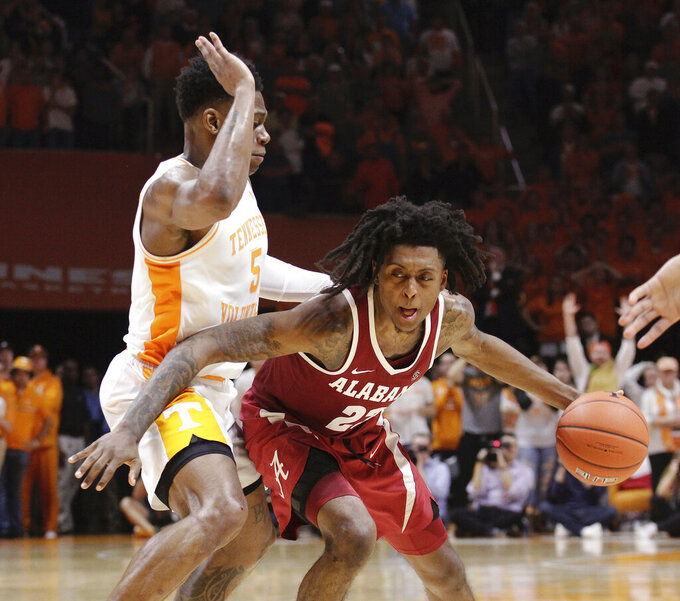 KNOXVILLE, Tenn. (AP) — The Tennessee Volunteers believe the best way for them to stay atop the rankings is by upping their defensive intensity.

"When you go back to where we were two years ago and where we were last year, the biggest change in our program was when we got to where we could defend people," said coach Rick Barnes, who's in his fourth season at Tennessee.

The Vols say that focus on defense has been missing at times this season, even as they've moved up in the rankings. Tennessee (16-1, 5-0 SEC) now wants to make sure history doesn't repeat itself.

The only other time the Vols reached the No. 1 spot was February 2008 — and then they promptly lost 72-69 at Vanderbilt the following night. Tennessee visits short-handed Vanderbilt (9-8, 0-5) Wednesday in the Vols' first game since moving back atop the polls.

"We've got a pretty simple goal," Barnes said. "We just want to be the best basketball team that we can be. We know that we've got room for improvement."

Tennessee is scoring 86.1 points per game, leads all Division I teams in assist-turnover ratio (1.7) and is ranked second in field-goal percentage (.511). Last season, Tennessee averaged 73.8 points, shot 44 percent and had a 1.3 assist-turnover ratio while earning a share of the Southeastern Conference's regular-season title.

The Vols fear their defense has slipped, though they've won 12 straight games.

"Last year, if you think about it, we were a terrible offensive team," forward Grant Williams said Saturday after a 71-68 victory over Alabama. "If you look back at film, we prided ourselves on defense. Since we got better on offense, we've taken a step back on that (defensive) end. That shouldn't happen. We should be able to sustain both."

But the Vols have struggled to play lock-down defense for a full 40 minutes.

"I'm not going to say we don't take pride in defense this year because we really do," Tennessee guard Jordan Bone said Saturday. "We're trying to get back to last year, but last year, I feel like it was just a different mindset. (Defense was) what we had to do to win."

The Vanderbilt team Tennessee faces Wednesday isn't comparable to the one that defeated the top-ranked Vols in 2008.

Vanderbilt's 2007-08 team was ranked 18th when it beat Tennessee and finished 26-8. This Vanderbilt team is 0-5 in SEC competition for the first time in school history and hasn't recovered from freshman guard Darius Garland's season-ending knee injury.

Vanderbilt initially appeared in position to survive the loss of Garland, who announced Tuesday that he's withdrawing from school to prepare for the NBA draft. The Commodores entered SEC play with a 9-3 record.

They haven't won since, despite leading four of their first five SEC games at one point. Vanderbilt is relying on youth with Joe Toye the only senior on the roster.

"You always dream of these moments where you get to get a team in your own gym, the No.1 team in the country, and hopefully play the game of your life and pull off a dramatic upset," Vanderbilt coach Bryce Drew said. "That's what makes sports so special is there's moments like this. And we're going to prepare the best we can, come out with the most energy that we can and hopefully keep people on the edge of their seats for quite a while."