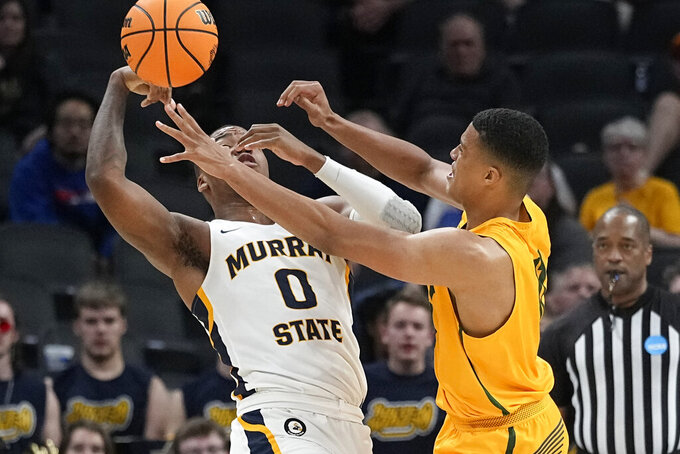 San Francisco forward Patrick Tape, right, tries to steal the ball from Murray State forward KJ Williams (0) during the second half of a college basketball game in the first round of the NCAA tournament, Thursday, March 17, 2022, in Indianapolis. (AP Photo/Darron Cummings) 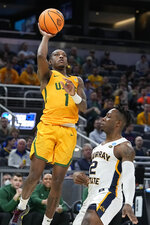 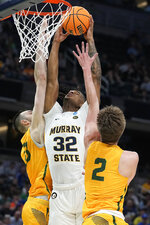 INDIANAPOLIS (AP) — Games like this require veteran leadership, which KJ Williams and others delivered for Murray State.

Williams scored six of his 18 points in overtime after Murray State blew an eight-point lead late in regulation, and the seventh-seeded Racers extended their winning streak to 21 games with a 92-87 victory over San Francisco in the first round of the NCAA Tournament on Thursday night.

“That game defined our team,” Murray State coach Matt McMahon said. “That’s just who they are. They find ways to win. Their toughness and will to win is incredibly special. I’m proud of them for their fight. We battled some foul trouble. Battled some cramps. Different guys stepped up.”

The Racers (31-2) tied South Dakota State for the longest winning streak in the nation this season. With SDSU's loss to Providence earlier Thursday, Murray State can edge ahead in Saturday's East Region second-round game against Saint Peter's. The 15th-seeded Peacocks toppled Kentucky 85-79 in OT.

The nightcap in Indianapolis was just as tight, with 18 lead changes and 14 ties in a contest that ended early Friday morning. Murray State ultimately took control with Williams' clutch baskets and Jordan Skipper-Brown's timely plays in the extra session.

Skipper-Brown in particular drew praise from McMahon and Williams.

“Skip came a long way with his performance tonight, and it shows that he been working on and off the court,” Williams said. “He just showed that great character tonight and just came out and played tremendously.”

McMahon added, “Skipper-Brown, when we needed him most, delivers a double-double.”

Jamaree Bouyea scored a career-high 36 points for USF (24-10), which made its first NCAA appearance since 1998. The graduate guard made just 4 of 12 from long range but was 13 of 26 overall, with each make shifting momentum.

“Trying to leave it all out there, no regrets,'' Bouyea said. “We needed buckets and stops and I was trying to put the ball in the basket.”

Zane Meeks added 13 points and Patrick Tape 10 with three blocks for USF before fouling out.

Williams made a go-ahead layup with 1:15 remaining before Skipper-Brown's layup made it 89-85 with 30 seconds left. Zane Meeks' putback got USF within a basket, but he missed a free throw. Skipper-Brown made two free throws with 13.7 seconds left before adding another with 1.7 seconds remaining to seal the win.

The Racers led 73-65 with 1:58 remaining in regulation, but Khalil Shabazz made a 3-pointer and Bouyea followed with five straight points.

Trae Hannibal also had 18 points for Murray State before fouling out late in regulation. Brown added 17, Justice Hill scored 15 and Skipper-Brown had 12 points and 10 rebounds, all of which the Racers needed to gut out their latest win.

The long ending to the Saint Peter's-Kentucky game delayed the game's start until after 10 p.m. which is more like the time zone the Dons are accustomed to. San Francisco players were lined up in the tunnel for the final minute of overtime and they were quietly rooting for Saint Peter’s before warming up and playing their own marathon contest.

San Francisco owned the paint 40-36 but was outrebounded 43-35, and that made the difference. The Dons also shot just 9 of 35 from long range.

“We let it fly,” coach Todd Golden said. "I thought we got some really, really good looks, especially in the second half. That didn’t just drop. It allowed them to get that little bit of a lead late.

“Fortunately we were able to come back, but man, I think we’ll watch the tape and just be a little disappointed that we didn’t shoot the ball better.”

Murray State got the balance it wanted and needed to outlast the Dons. Skipper-Brown led a bench effort that outscored USF 36-23.