No. 24 Badgers looking for payback against No. 21 Maryland 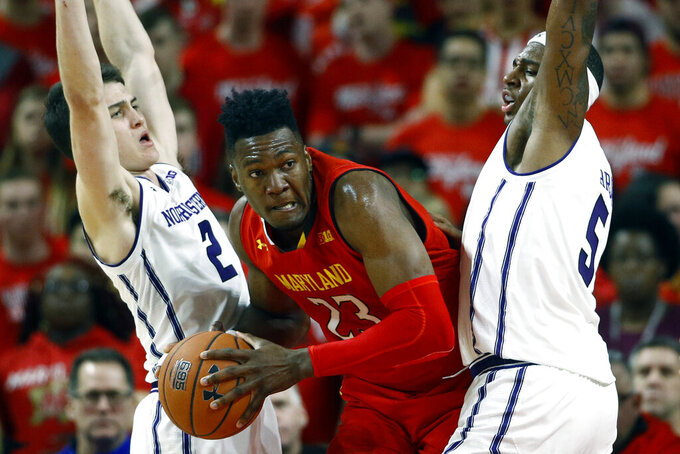 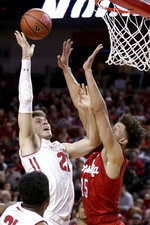 GAME OF THE WEEKEND: No. 21 Maryland (17-5, 8-3) at No. 24 Wisconsin (15-6, 7-3) on Friday. The Badgers lost the first meeting, 64-60, in College Park two weeks ago. Two of the Big Ten's premier big men square off in the Terrapins' Bruno Fernando and the Badgers' Ethan Happ. Both were limited by foul trouble in the first game. Fernando is coming off his third straight double-double, and 13th of the season, against Northwestern. Both teams are just off the pace in the conference race.

LOOKING AHEAD: Michigan (20-1, 9-1) plays back-to-back road games, Iowa on Friday and Rutgers on next Tuesday. Conference co-leader Michigan State (18-3, 9-1) hosts Indiana on Saturday and visits Illinois on Tuesday. Zavier Simpson became the sixth player in Michigan history to record a double-double, with 11 points, 12 assists and 10 rebounds against Ohio State on Tuesday. The Spartans will be without Joshua Langford (ankle) for the rest of the season. They've gone 7-1 since he went out. Third-place Purdue (14-6, 7-2) are in position to keep pace with its next three games against last-place Penn State, sixth-place Minnesota and 11th-place Nebraska.

PLAYER TO WATCH: Purdue's Nojel Eastern has played a significant role during the Boilermakers' five-game win streak. The sophomore guard had his second double-double in three games in the upset of Michigan State on Sunday , with career highs of 12 points and 11 rebounds. The Spartans fouled him three times late in the game in an attempt to come back. A 41-percent free-throw shooter through the first 15 games, Eastern made six straight to finish off MSU. He's made 16 of 21 free throws during the win streak and is at 56.3 percent for the season. Eastern also is a lockdown defender on the perimeter.

INSIDE THE NUMBERS: Nebraska is shooting 34.7 percent from the field and 28.9 on 3-pointers during its four-game losing streak. Season scoring leader James Palmer is at 33 percent from the field, 32 percent on 3s. ... Minnesota's Jordan Murphy came out of the Gophers' win over Iowa with 1,150 career rebounds, ranking second to Ohio State's Jerry Lucas (1,411 from 1959-62). ... Indiana's seven-game losing streak is the program's longest since dropping nine in a row to end 2010-11.

ON THE WOMEN'S SIDE: The top of the conference and fifth-place team are separated by only two games entering Thursday night's games, with Rutgers (16-4, 8-1) holding a one-game lead over Maryland (18-2, 7-2) and Iowa (16-4, 7-2). Rutgers plays Wisconsin at home and Maryland hosts Wisconsin while Iowa visits Michigan. ... Wisconsin and Nebraska had one of the most exciting finishes of the season Sunday. The Badgers, down 14 points in the third quarter and by two with seven-tenths of a second left, won 70-69 when Kelly Karlis beat the buzzer with a 3-pointer. ... Indiana, which started 14-1 and won its first three Big Ten games for the first time since 2008-09, has lost four of its last six.