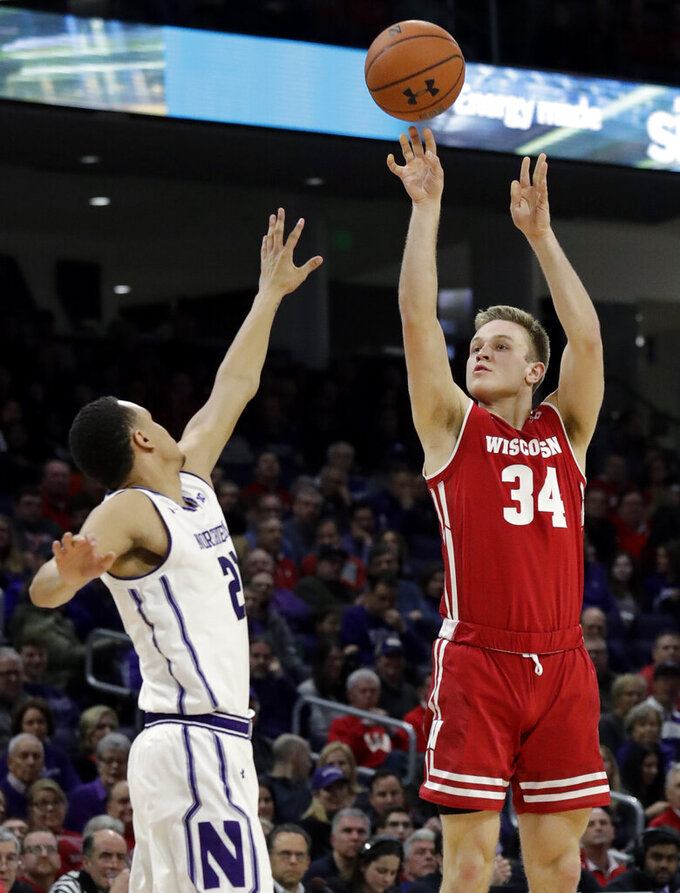 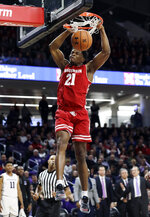 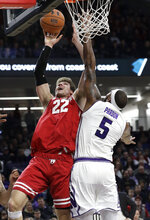 "You want to play in the best conference from top to bottom in the country because you get challenged each and every day," Davison said. "At the end of the day, we're all playing for March, and this game got us better for March for sure."

Wisconsin committed 10 turnovers and shot 45.5 percent from the field to Northwestern's 40.7 percent. The Badgers went 7 for 19 from 3-point range compared to the Wildcats' 6 for 21.

Happ took over after a quiet first half. He scored six consecutive points for Wisconsin — all on hook shots — for a 53-46 lead with 7:53 left.

"The second half, there was more space around him," Wisconsin coach Greg Gard said about Happ. "We were able to tweak some things as far as where guys were at. He also did a better job of making decisions quicker to attack before help got there and when help did come he found the open guys."

Law responded by scoring 11 straight points on four baskets to give the Wildcats a 57-55 lead.

Davison made a jumper to put Wisconsin up 65-62 with just under two minutes to go before A.J. Turner missed a jumper on the other end. Law hit two free throws with 15.1 seconds left to pull the Wildcats within one. Davison hit two foul shots, and Northwestern's Aaron Falzon missed a three with four seconds remaining.

Wisconsin has won seven of its last eight at Northwestern.

Wisconsin: The Badgers have bounced back with wins over Illinois and Northwestern after back-to-back losses to No. 7 Michigan and No. 10 Michigan State. Wisconsin has a chance to pick up victories against two teams in the bottom half of the conference standings, Indiana and Penn State, next to pad its resume for the NCAA Tournament.

Northwestern: The Wildcats haven't won since beating Indiana 73-66 on Jan. 22 and are in danger of their second consecutive losing season after reaching the NCAA Tournament for the first time in 2017.

Happ finished with 10 rebounds and was 6 for 11 from the field.

"I hope I don't ever have to play against him again, unless it's the Big Ten championship game," Collins said. "He is a very difficult guy to play against because he's very unique."

Davison's step-back jumper with 1:56 left bounced a few times before falling through the net.

"He's made big shots for us. He's only a sophomore. He wants the ball in his hands. He's fearless like that. And he practices those."

Happ had missed 11 consecutive free throws before making one with 3:46 left before halftime. He missed the second attempt. ... Happ struggled in his previous game, scoring a season-low six points against Illinois. ... The Badgers have limited Northwestern to 70 or fewer points for 40 straight games.

Wisconsin: At Indiana on Tuesday night.