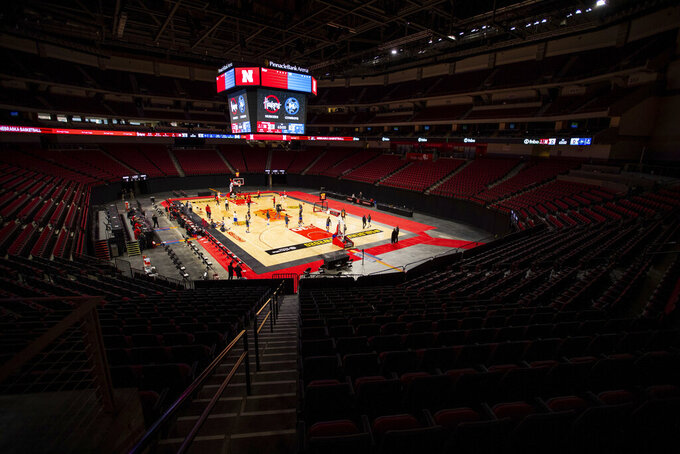 Players warm up before the start of the McNeese State vs. Nebraska NCAA college basketball game at the Pinnacle Bank Arena in Lincoln, Neb., Wednesday, Nov. 25, 2020. (Anna Reed/Omaha World-Herald via AP)

LINCOLN, Neb. (AP) — Four Cornhuskers scored 14 points each and six finished in double figures as a cast of newcomers led Nebraska to a 102-55 victory over McNeese State on Wednesday.

Mayen hit two 3-pointers and McGowens had a 3-pointer and a bucket as the Cornhuskers took an 11-3 lead to start the game. They outscored the Cowboys 23-10 over the final 9:30 of the first half to lead 50-28.

Before the game, Nebraska announced that another transfer, Derrick Walker, was suspended by the NCAA for the first 16 games of the season for an undisclosed rules violation while at Tennessee in 2018-19.

Dru Kuxhausen, a native of Scottsbluff, Nebraska, who led the NCAA is 3-pointers made last season with 125, was 3 of 8 from the arc and led the Cowboys with 11 points.

McNeese only returned to on-campus practices on Nov. 15 after Hurricanes Laura and Delta caused nearly $200 million in damages to the campus, including to the Cowboys' two-year old arena.