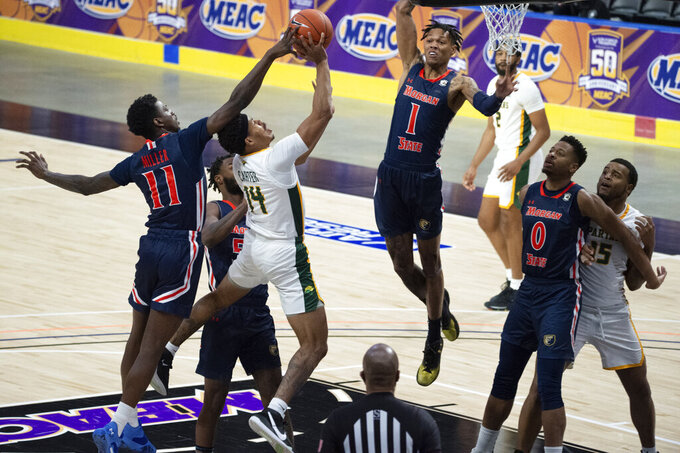 Norfolk State's Devante Carter (14) drives in for a lay-up as he's defended by Morgan State's Troy Baxter (1) and Malik Miller (11) during the second half of an NCAA college basketball game in the championship of the Mid-Eastern Athletic Conference tournament at the Scope Arena on Saturday, March 13, 2021, in Norfolk, Va. (AP Photo/Mike Caudill)

Norfolk State (16-7) claimed its second MEAC title in five championship-game appearances. Its other title came in 2012 when it went on to beat No. 2 seed Missouri in the NCAA Tournament before losing to No. 7 Florida. This is the first NCAA berth under eighth-year coach Robert Jones.

Bryant scored 10 straight points in a run that gave the Spartans a double-figures lead that eventually reached 16 points and lasted until there were three minutes remaining. The Bears (14-8) got as close as six with 30.6 seconds left before Hicks sandwiched a pair of dunks around Morgan State's final bucket to ensure the Spartans' seventh straight win.

Hicks had 3-pointer and layup to start 8-0 run for a 10-point lead with three minutes left in half. De’Torrion Ware responded with four points in a 6-0 run but a 3-pointer from Kyonze Chavis gave the Spartans 37-30 halftime lead.

Ware, who scored 35 and 29 points in Morgan State's two tournament wins, finished with 16 points. Lagio Grantsaan added 13 points. The Bears made only 3 of 17 from the arc, missing all seven of their second-half attempts, and just 16 of 25 free throws. They had 18 turnovers, only three more than the Spartans, but got the worst of it in terms of points off those errors (24-10).

With this win, the Spartans defeated the Bears four times this season. The MEAC split into two divisions because of the pandemic and teams only played within their division, resulting in Norfolk State and Morgan State facing off in four regular-season games. The Spartans and Bears were the second and third seeds, respectively, out of the North Division.

Morgan State played in its third game in three days while Norfolk played its second tournament game after its semifinal opponent, North Carolina A&T, had to withdraw after a positive COVID-19 test within its program.